Murrieta, CA Right To Fight—Obama Regime Plans European-Style Asylum Camps Throughout The US 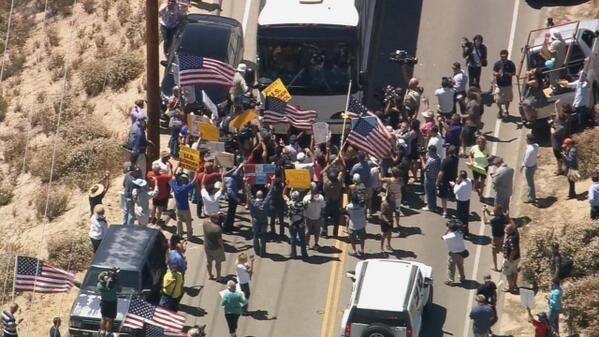 Ordinary American patriots are rising up in fury against the Obama Regime’s unlawful nation-wide dumping of diseased, tax-eating illegal alien children and their parents, from Lawrenceville, Virginia, to Murrieta, California. And they should, because it suggests a fundamental shift in Regime policy—towards the establishment of permanent government-supported alien enclaves on the European asylum model.

In a heart-breaking reminder of what might have been, money-mugged former GOP gubernatorial candidate Tim Donnelly has announced he will visit Murrieta to show solidarity and pray on the border. In contrast, Neel Kashkari, pick of California’s notorious idiot GOP leadership, says the protesters represent "an extreme minority of Californians.” [Murrieta protest over immigrant kids exposes political divisions, by Carla Marinucci, SFGate.com, July 4, 2014]

Patrice Lynes, organizer of the Murrieta bus blockade and 2012 candidate for the Temecula City Council, is also a registered nurse. She told the John and Ken radio show: “I have it on good authority agents in Texas have already contracted TB… This is a health and safety issue, as well as encompassing other issues.” Host John Kobylt responded that his KFI-AM station had a reported a tuberculosis outbreak revealed by a Border Patrol union official. [Listen.]

But the danger of an epidemic of some Third World disease is not important to the Regime, which is sending lawyers for the kiddies rather than soldiers to defend the border. [Obama to provide legal aid to border-crossing children, , by Alan Gomez, USA TODAY, June 6, 2014] The White House seems to be following the Rahm Emanuel maxim“You never want a serious crisis to go to waste. And what I mean by that it's an opportunity to do things you think you could not do before.”[In Crisis, Opportunity for Obama, by Gerald F. Seib, The Wall Street Journal, November 21, 2008]

The “thing you could not do before” seems to be a transformation of the foundational principle of American immigration. Instead of welcoming capable individuals, we’re moving to a global welfare program.

The thousands of children flooding across the border for largely economic reasons have been coached to use catch phrases allowing the Regime to treat them as asylum seekers. [Illegal Immigrants Flooding US Facilities Claiming “Credible Fear” for lives,by Kristin Tate, Breitbart, April 11, 2014] This conscious fraud is the source of much of the chaos.

The asylum-seekers are mostly uneducated Third Worlders—perfect future Democrats who will vote for big government.

Educated immigrants might include the occasional assimilable non-socialist. But moving to the mega-asylum model would swamp any prospect of that. Besides creating a permanent Leftist majority, the ongoing crisis provides the perfect excuse to expand government—and to impose garrisons of Leftist minority voters in whatever Red State whitopias remain. (NumbersUSA has published an interactive map that shows the sites around the country and citizen response.)

To confront the “humanitarian crisis” feds are shopping around for comfy long-term housing:

A humanitarian tragedy at the U.S.-Mexican border took a weirdly comic turn in Grand Island on Friday, as federal officials showed up at what they thought was a vacant hotel that might be able to house children who entered the country illegally—only to discover the fully occupied and recently renamed Byblos Niagara Resort and Spa.

The federal agents arrived unannounced at about 10 a.m. to inspect the 263-room property for possible use as housing for some of the 52,000 unaccompanied minors who have been apprehended at the southern border this year.

“They were thinking the hotel was abandoned and closed,” said Scott Swagler, the general manager of the facility, a former Holiday Inn undergoing a $10 million renovation.

We shouldn’t be surprised. As I reported regarding the planned acquisition of a closed college in Lawrenceville VA, that planned housing facility was be “one of at least a hundred of these types of shelters across the U.S.” [Anger flares over planned alien teen immigrant shelter in Lawrenceville, by Kelly Avellino, WSMV, June 19, 2014. Emphasis added.]

There are shelter-hunting reports all over the country, including the Chicago area (!), Miami and Arizona.

The housing in Arizona has been set up within a Border Patrol compound, so there’s no rest for the weary officers.

At another dump zone, Oklahoma Governor Mary Fallin visited Fort Sill on to see how the housing was going for 600 kids, mostly teens aged 12 to 17. Significantly, she didn’t believe that the kids would stay only three months as promised, commenting "What makes us think that it's only going to be 120 days. It's only going to get worse, years on end here in the United States." [Governor Mary Fallin Tours Immigrant Housing At Fort Sill, by Evan Anderson, News 9, June 20, 2014]

The Regime is apparently setting up intruder camps on the European model, where asylum seekers are put up in temporary housing for months or longer until their legal status cases are decided. One example: the Netherlands, which is famously generous to intrusive foreigners and even maintains a website explaining what free stuff is available.

The Somalian women’s rights advocate Ayaan Hirsi Ali ended up in a Dutch shelter after fleeing an arranged marriage, by falsely claiming political asylum. [Profile: Ayaan Hirsi Ali,BBC, June 29, 2006.] In her 2007 book Infidel, the story of her cultural transformation, she described her arrival at the Zeewolde Reception Center:

He took me to Bungalow 28 and said I would be sharing with three Ethiopian girls. Every Thursday, he told me, I could take my sheets to the laundry and receive a clean set. I gaped at him. He explained that dinner would be at five-thirty in the canteen, and told me that tomorrow I would receive a fuller introduction; someone else would show me where the interview would take place, where the lawyer’s office was, and the health center. Health care was free, he informed me, and so was room and board: it was all provided by the government. I would also receive a weekly allowance for my basic needs.

A few months later, Ali moved to an apartment with the help of a government subsidy. Such is the generosity of a European welfare state.

Not that European folks like their governments diversity-bombing their towns any more than Americans do. Earlier this year, the German government assigned 200 refugees to Bavaria, with a number of them placed in an apartment building with 12 to a flat, dorm style. The residents were outraged that nobody was told of the plan and found out only when the furniture started arriving.

A video of the controversy [Watch] was reminiscent of the Lawrenceville residents, with the same concerns of worsened crime and a detached government unloading unwanted foreigners against the desires of local people for peace and security.

Men like “Hossain” were housed in a former hotel, but complained that the small town wasn’t entertaining enough.

Thus the Obama Regime doesn’t have to use its fertile imagination to create a system for importing future voters because the template already exists. Europe has already built the model.

Indeed, according to recent reports, the Regime has been planning since at least January for thousands of foreign kids requiring geographic redistribution in America:

A recently discovered government request for “escort services for unaccompanied alien children” dating back to January is raising questions about whether the government was planning for a surge of illegal immigrants this year as amnesty talks heated up in the United States.

The request specifically says it was preparing for 65,000 undocumented children.

[Gov’t Confirms Authenticity of Contract Request for ‘Escort Services for Unaccompanied Alien Children’ at the Border, by Sara Carter, The Blaze, June 20, 2014]

So this “crisis” was something the Regime prepared for in advance. Well, partially prepared, because nothing was done to improve border enforcement—only to provide for the illegal aliens Obama essentially invited.

As a result, Border Patrol agents have been turned into daycare workers and the Mexican cartels have unprecedented access to America for smuggling drugs and children. Plus newly energized jihadists from the Middle East may use the breach. [Iraqi Extremists Promising Attack Could Slip Through Mexican Border,CBS DFW, June 18, 2014]

Obama’s October, 2008 promise to “fundamentally transform” America may have fallen short in Congress, with the exception of Obamacare.

However, dishonestly, unilaterally, and illegally, he’s making a bigger transformation than any law—fundamentally changing the makeup of the American people itself.