For Immigration Patriot Hobbits, Trump Must AND CAN Be Reelected—Or Sauron’s Army Will Prevail!

Donald Trump has been a mixed bag so far for immigration patriots. Of course, he is not Hillary Clinton (or Jeb Bush). He has increased enforcement and tried to impose a partial Muslim travel ban. But he could have done more and he sometimes makes Politically Correct statements that he actually appears to believe. Still, the fact remains that Donald Trump is the first President since Ronald Reagan who genuinely loves his country and seeks to preserve it. His reelection must be the highest priority for immigration patriots. [The Face of Donald Trump’s 2020 Campaign, by Katie Gluek, McClatchy, June 7, 2017] I believe it can be done—and, remember, I predicted Trump would run as an immigration patriot back in early 2015.

Re-election will be quite a challenge, given that Trump’s political opponents are engaged in a permanent campaign to delegitimize him and the “America First” policies he (sometimes) advocates. We are currently living through, as others have noted, a “Cold Civil War”, a war that began decades ago, even if most Americans only recently woke up to the fact.

Donald Trump, therefore, must see himself as a wartime president if he is to accomplish anything, including reelection.

First, Trump must act aggressively on the National Question, the very issue that got him elected in the first place. A political newcomer like Donald Trump did not fill large arenas in blue states with people who liked to watch The Apprentice. Neither did these people stand in line for hours to see Donald Trump because they really wanted to hear about tax cuts or healthcare reform. These people waited in line because they desperately want their country back and they were excited about finally having a candidate who promised to do just that.

Donald Trump, therefore, must continually reiterate an America First position on immigration, refugees, Official English, etc., or else many of those voters will be disappointed; so disappointed that they will stay home in 2020. 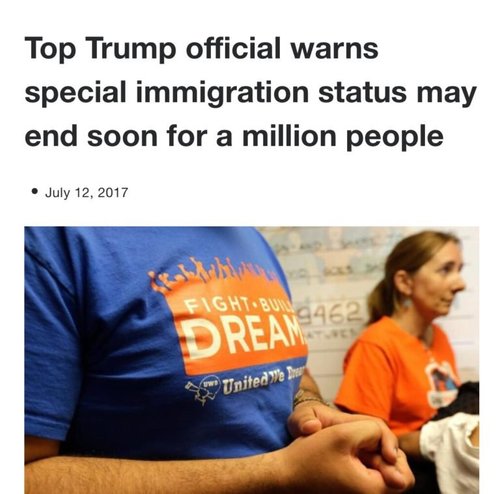 Here, there is reason for concern. As of this writing, the clearly unconstitutional Deferred Action for Childhood Arrivals [DACA] program remains in place (although arguably Trump expects the courts to kill it for him) and the flood of refugees has decreased, but is still unacceptably high. [ A look at the decline in refugees entering the U.S. under Trump,By Melissa Etehad and Ann M. Simmons, LA TImes,, May 25, 2017 ]Trump has also made some poor appointments (such as the spineless John Kelly as head of Homeland Security). [Homeland Security secretary suggests amnesty for Dreamers, implores Congress to solve problem,  By Stephen Dinan, Washington Times, June 11, 2017]

In short, there is a gnawing sense that Trump is dragging his feet on immigration, and with it, a feeling of frustration and letdown among his supporters.

I wrote on VDARE.com long before the primaries began that Trump would win the New Hampshire contest handily if he campaigned against refugee resettlement (the most unpopular public policy in the Granite State by far) Trump did just that (though the Main Stream Media neglected to report it), but he has only partially delivered on that promise.

In this climate, partial won’t cut it. And New Hampshire voters will remember that during the crucial 2020 primary, especially if the GOP Establishment runs a dark horse candidate to oppose Trump (a likely prospect).

Being more proactive on the National Question means greatly reducing (if not entirely eliminating) refugee resettlement. He must also send pro-enforcement legislation to the Republican Congress again and again, and if they fail to pass it, publicly rebuke them. There are few things Republican voters will respect more than a President who will defend them against a squishy Open Borders Republican.

For example, Senator Thom Tillis (R-North Carolina) has received glowing MSM praise for his “centrism” (i.e. continuous betrayal of American workers) on immigration [Tillis To Continue Push For Bipartisan Immigration Reform, by Joe Marusak & Mark Price, The Charlotte Observer, February 11, 2017]. Incredibly, Tillis refused to allow a vote for Trump’s nominee for the US Citizenship and Immigration Services unless the feds increased the number of H2-B Visas issued to foreign workers. [Trump Says Democrats Are Blocking His Nominees, But The GOP’s Tillis Is Holding Up This One, by Brian Murphy, McClatchy, July 12, 2017]

In the House, the Appropriations Committee (GOP-controlled, remember) has actually approved allowing Deferred Action recipients to hold federal jobs. In a typical act of hypocrisy, Committee Chair Rodney Frelinghuysen (R-N.J) refused to hold a voice vote on the amendment so that no congressman could be held accountable.

If Trump really wants to deliver on his promise to drain the swamp, he must expose these Cheap Labor Republicans for the sell-outs they truly are. The Establishment will howl, but the voters will gobble it up.

Moreover, the Republicans who are undermining Trump’s America First agenda now will be even more brazen during the 2020 campaign. Better to expose these phonies now before the campaign officially begins.

It’s vital to realize that if Donald Trump tries to implement pro-enforcement policies and fails, he will suffer little or no damage—at least temporarily. What he must do is fight the good fight, as St. Paul put it, win or lose. For example, if Trump were to push eliminating Birthright Citizenship and fall short, his base would rally to him, and he may well succeed in a subsequent attempt. But Trump has to convince his patriot base that he is carrying on the fight, despite any setbacks.

In my opinion, the Democrats/ MSM are a soft opposition. The Coalition of the Diverse is on the ropes. Fundraising is low and morale is even lower. [DNC hits another fundraising low, Washington Times, June 21, 2017] The over-the-top anti-Trump rhetoric has become white noise. Moreover, their leading candidate for 2020 is Senator Elizabeth Warren (NumbersUSA-F), an Open Borders, Affirmative Action fraud.

For exactly these reasons, however, things will get very ugly. In this Cold Civil War there will be no armies occupying territory or waging combat, but there will be lots of mobs, and they will increase in size, frequency, and intensity. The anti-American Left knows that mobs give the illusion of broad opposition, which is why our leaders so often wilt in the face of them.

In short, as VDARE.com Editor Peter Brimelow concluded after observing the Left’s Inauguration-Day tantrum, it will indeed come to blood.

Donald Trump will have to confront this insanity the way Richard Nixon did during the anti-war protests of the 1960s and 70s. Only the violence and chaos is going to be worse, so much worse.

One underappreciated tactic the Left employs to advance its agenda is to alter the political vocabulary (“undocumented immigrant”, “Islamophobia,” “winter holiday”). They understand that if they can control our language, they can control the debate, and inch their agenda forward. This Cold Civil War is, therefore, in many ways, a language war; strange as that may sound.

The Open Borders Left knows that patriots can win the battle of ideas easily if they are forces into the public square, which is why they frantically try to censor them. But thanks to Trump’s shifting of the Overton Window, we are now openly discussing the prospect of defunding Sanctuary Cities and prohibiting immigration from Muslim countries, despite a hysterical MSM disinformation campaign. That is a giant step forward, even if the Left continues to stymy (at least temporarily) their implementation.

The reason why the Left suffers constant meltdowns over minor actions Donald Trump may (or, more likely, may not) have taken is because they know they have lost their ability to control the narrative over the National Question. They will, therefore, continue to inch up the volume in order to distract the country from having a debate they cannot win.

But Trump does have one significant advantage for Trump: the Democrats have reacted to his victory by moving even farther to the Left. They have elected an Open Borders Hispanic (Tom Perez) to head the Democratic National Committee, who then reluctantly agreed to having a white-loathing black Muslim (Keith Ellison) as his deputy—a vivid illustration of the utter disarray within the Coalition of the Diverse.

The Democrats have also taken a sharp Left turn in policy. Just as the Democrats used to give lip service to pro-life sentiments, but now unabashedly promote abortion as a positive good, they also used to utter token support for immigration enforcement, but now they openly call for the elimination of all borders and deportations.

The mask is off, and the public will see what truly lies underneath—if Donald Trump is wise enough to point it out for them, repeatedly.

For more than a generation, an insidious elite has been bullying the American majority with Political Correctness. Most Americans fall silently in line with these Newspeak strictures, wishing people a “Happy Holiday” every Christmas not out of respect, but out of fear. Americans are desperate to push back against all this—if only someone would lead them.

The biggest challenge: people on the Right tire easily. Most patriotic Americans are not hyper-politicized. We enjoy the everyday pleasures of local life and family. We find it a relief to go several days without reading the news. We don’t enjoy the political noise—but unfortunately, our adversaries thrive on it.

American patriots are like Tolkein’s hobbits who prefer the comforts of the shire, but have come to realize, dangerously late, that the armies of Sauron are marching against us.

If Donald Trump is not reelected, the Orcs may well prevail.