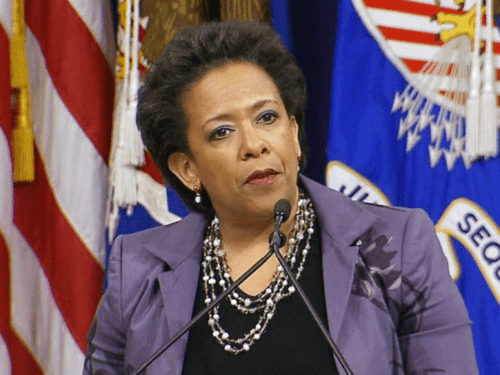 AG Nominee Lynch is not the real problem. The problem is the collection of Flakes in the GOP leadership.

It appears the GOP Congressional Leadership has finally caved on Loretta Lynch. The party bosses have resolved a dispute over abortion holding up a human trafficking bill that was being used to delay a vote on Lynch. After being accused of being opposed to “women” for the last few weeks, Senate Majority Mitch McConnell has reportedly cracked (again) and will now allow a confirmation vote [Senate reaches deal to vote on AG nominee Loretta Lynch, by Alexander Bolton, The Hill, April 21, 2015].

But the responsibility doesn’t lie solely with McConnell. Even though Lynch’s record on race is exactly what one would expect from Eric Holder’s hand-picked successor and she will continue Obama’s unlawful Amnesty, several Republican Senators have already declared they will vote for Loretta Lynch. And as you might expect, the same Senators who won’t vote against Lynch are the same Senators who won’t do anything about Amnesty.

The five openly declared Lynch supporters in the Republican Party include:

Graham may be running for President but despite that, he is still openly defending Amnesty [Lindsey Graham on 2016, Immigration and Israel, by Beth Reinhard, Wall Street Journal, April 20, 2015]. A Gang of Eight co-sponsor, it’s not surprising he is eager to support Lynch. Graham’s strategy to confront Obama’s unilateral Amnesty was to fully fund it and leave it to the courts figure it out [Sen. Lindsey Graham is the White House’s favorite Republican for funding Amnesty, by Conn Carroll, Townhall, February 23, 2015].

Graham made his priorities quite clear during Lynch’s confirmation hearings. While America’s Senator, Jeff Sessions  grilled Lynch on her willingness to back Obama’s executive Amnesty orders, Graham led a line of questioning about… online gambling, which his megabillionaire backer and casino mogul Sheldon Adelson strongly opposes. (Adelson, needless to say, also supports Amnesty.)

Kirk is a member of the liberal “Main Street Republicans” group and has a poor record on immigration, with a lifetime C rating from NumbersUSA. Kirk claimed to oppose Obama’s executive Amnesty—but only because it robbed Republicans of a chance to pass a “bipartisan” bill doing more or less the same thing. He then voted to fund it anyway [Sen. Mark Kirk: Opposed Obama’s Amnesty before voting for it, Numbers USA, January 22, 2015]

Incredibly, Hatch says that he is supporting Lynch because the Justice Department “needs new leadership” [Hatch Moves to Support Lynch, Hatch Senate Website, Accessed April 21, 2015]. This is par for the course for Hatch, who has a record of announcing support for far-Left Democrats and then acting surprised when they predictably attack Republicans. “I start with the premise that the president deserves the benefit of the doubt. I don’t think politics should be played with the attorney general,” he told The Hill in 2009. Just as Hatch is now supporting Lynch, he supported Eric Holder in the interest of “comity,” even though Holder’s future anti-White activities as Attorney General were easy to predict.

Not surprisingly, Hatch, who has a C lifetime rating from Numbers USA, also claimed to oppose Obama’s unilateral Amnesty before voting to support it [Sen. Orrin Hatch: Opposed Obama’s Amnesty Before Voting for it, Numbers USA, January 19, 2015].

The appropriately-named Jeff Flake is a long-standing immigration enthusiast back to when he was co-sponsoring legislation alongside Luis Gutierrez in order to bring in more immigrants. Not long ago, there were even suspicions that he was preparing to switch parties. A member of the Gang of Eight, Flake muttered some dissent about the legality of Obama’s unilateral Amnesty, before voting in support of it [Sen: Jeff Flake: Opposed Obama’s Amnesty before voting for it, Numbers USA, January 12, 2015]

Susan Collins said she found Lynch to be “very impressive and I think she deserves to be confirmed.” Of course, Collins also tried to frame this as a way to get rid of Holder more quickly [Lynch nomination to replace Holder coming up in Senate next week, by Kathleen Hunter, Bloomberg, March 10, 2015].

But Collins also voted to end debate on the Gang of Eight’s Amnesty bill in 2013, which helped push the bill toward passage. She did rhetorically condemn Obama’s unilateral Amnesty because it “is undermining our constitutional separation of powers.” However, when the time came to vote in support of Ted Cruz’s point of order which would have opposed Obama’s action on constitutional grounds, Collins voted against Cruz and in support of Obama. Senator Collins has a lifetime C- record according to Numbers USA, and she’s getting worse with each passing year.

What’s particularly disgusting about all of this is that even “respectable” conservatives have plenty of cover. The Heritage Foundation says that the Senate must vote “No” especially “when a nominee supports actions that go beyond the executive’s constitutional authority,” as Lynch does. [“No” on the Confirmation of Loretta Lynch for Attorney General, Heritage Action for America, March 2, 2015]. Even National Review has editorialized against the Lynch nomination [Resist the Lynch nomination, National Review, January 29, 2015].

And the Main Stream Media has highlighted other important reasons to oppose Lynch becoming the Attorney General. U.S. News & World Report noted: “There are serious allegations that prosecutors in her office – the U.S. Attorney’s Office for the Eastern District of New York – made use of secret dockets, denied the victims of crime the opportunity to pursue restitution as required by federal law, and committed other abuses.” [Block Loretta Lynch’s Confirmation, by Peter Roff, February 5, 2015].

Lynch was also heavily implicated in the massive money -laundering scandal involving banking giant HSBC. As U.S. attorney for the Eastern District of New York, Lynch agreed to drop charges against HSBC officials in return for its paying a fine [HSBC Whistleblower spills Lynch Evidence To Senate, by Jerome Corsi, WND, February 18, 2015]. Testimony on all of this was presented to the Senate Judiciary Committee. Politically, it’s hard to see the downside of opposing an Obama nominee because she allegedly protected corrupt bankers.

But Lynch would be the country’s first black female Attorney General. Not many Republicans want to vote against that. Lynch also comes from a humble family background, which gives her a narrative that can be eagerly promoted if this battle is drawn out any further [After forging her path from N.C. to Brooklyn, Lynch is poised to become attorney general, by Sari Horwitz, Washington Post, January 26, 2015].

And while the MSM is largely shying away from her role in banking scandals, it celebrates how she helped prosecute the Lufthansa heist immortalized in the movie “Goodfellas” [Loretta Lynch Versus the Goodfellas, by James Oliphant, National Journal, December 12, 2014].

What all of this shows is how talk of a Republican “majority” is deeply misleading when it comes to immigration. While the Democrats remain utterly united and fanatically dedicated to the goal of importing more Third World immigrants, the GOP cannot keep its caucus on the same side even when it comes to voting against Eric Holder’s chosen heir in the very office that will be used to administer Obama’s unilateral Amnesty.

Instead of a two-party system, we really have a “one and a half” party system, where monolithic Democrats and a rump of the Republicans can always be counted on to go along with more immigration.

And Republicans are so intimidated of being regarded as “racist” or “sexist” that they insist on acting like gentlemen even as Democrats ceaselessly campaign against them as vile bigots.

The solution: either purge the Republican party of immigration supporters—or starting a new party altogether. But both of these ambitious goals share the same prerequisite—stopping immigration must be at the center of any reconstituted American Right. Anything less is just preparation for more failure.

After all, as the Lynch vote clearly shows, a “majority” composed of Flakes isn’t worth much of anything at all.