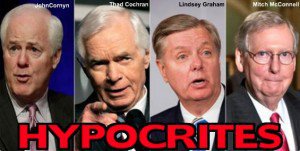 With tremendous industry Heritage Action has forged a blade which should to be laid up in the armory of every Patriot: it will be needed in the bitter struggle which lies ahead.

Obama’s Amnesty: How They Voted vs. What They Said Dan Holler December 14 2014 deals with the point of order vote enterprisingly forced by Ted Cruz:

“If Senators are opposed to President Obama’s executive action on immigration, they should vote in favor of Sen. Cruz’s constitutional point of order.  A vote against the point of order is a vote in favor of unchecked presidential power and granting work permits and Social Security numbers to people who are in the country illegally.”

No less than 20 Republican Senators voted against the point of order, endorsing Obama’s coup d’état and placing themselves on record as despising the Constitution, as Daniel Horowitz has eloquently said. (22 voted for it.) Heritage Action has methodically gone through the news to demonstrate that the Nays all claimed to be strongly against the usurpation of power when announced.

The president should honor his own words that unilateral action on immigration reform is ‘not how our democracy functions’ and ‘not how our Constitution is written.‘

I am working with my colleagues to explore all options – legislative and legal – to stop the president’s blatant disregard for our nation’s system of checks and balances.”

The Congress should review its best options and then act responsibly to address the President’s actions and ensure the primacy of the rule of law.”

President Obama’s excessive use of executive orders to circumvent Congress is undermining our constitutional separation of powers doctrine. His unilateral action on such a significant issue is contrary to how our constitutional system is supposed to work.”

The president is blatantly ignoring the rule of law and Congress’ constitutional role,

By circumventing Congress on immigration and instituting his will through executive actions, President Obama is eroding the very foundation of our country and form of government

This is a tremendous presidential overreach.  I will try to defund the effort for him to go it alone. (VDARE.com emphasis).

He does not have the authority and the power to do what he is doing. … it’s not constitutional

President Obama declared a series of immigration actions through executive fiat.  He has dictated his own laws. President Obama has repeatedly stated that he does not have the constitutional authority to change immigration laws unilaterally.”

“By driving over Congress…

The instances of President Obama saying that he does not have the power to do the kinds of things he now plans to do are almost too numerous to list. .. The action he’s proposed would ignore the law.”

What I cannot support is immigration changes in the form of a Presidential fiat – an action publicly called unlawful by President Obama twenty two separate times.

I strongly oppose the President’s latest overreach of his legal authority and his decision to dictate sweeping immigration policy changes without legislation.

This amnesty order undermines the rule of law and threatens our system of checks and balances. … No president has the authority to act unilaterally in this manner

Over at Conservative Review, Gaston Mooney has a fierce denunciation 9 Senators Who Agree They Violated Their Oath of Office December 15th, 2014 of the senators who voted for the Cruz point of order and then voted for Chromnibus.

I think this is too harsh. Patriots are better off with cowards with scruples than unscrupulous liars.

The Cruz point of order had no binding force. It was purely symbolic. It was also extremely successful in demonstrating the ugly reality:

The Congressional GOP Leadership has been lavishly bribed to connive at Administrative Amnesty. Orders are to throw away every  possible negotiating asset. There is no other plausible explanation for this defiance of political gravity.

However the fact that so many Senators were trying to sneak by with brave verbage indicates they know what their constituents think.

Congratulations to Heritage Action – and to Ted Cruz for turning the light on.