The Kumbaya Temptation—This Is No Time For The GOP To "Work Together" With Obama!

Nov. 4 was a national vote of no confidence in Barack Obama.

Had a British prime minister received a vote like this, he would have resigned by now.

The one issue on which all Republicans agre 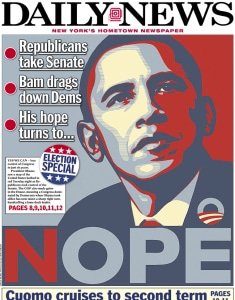 ed, and all ran, was the rejection of Obama. And by fleeing from him, some even refusing to admit they voted for him, Democrats, too, were conceding that this election was about Obama, and that they were not to blame for his failures.

Yet, though this was a referendum on Obama and his policies, and though both were repudiated, some pundits are claiming that America voted for an "end to gridlock" and a new era of compromise and conciliation.

How so? If the American people were truly saying that, why did they vote to turn the Senate over to Mitch McConnell? Why did they vote to send more Republicans to strengthen the hand of John Boehner and those in the House who had "shut down" the government?

Did America vote for the GOP to go back to Washington and work with Obama? Or did America reward the GOP for promising to return and continue to oppose Obama's policies?

Is the answer not obvious?

What Republicans are hearing now is the siren song of a Beltway elite that just got its clock cleaned, an elite that revels in Republican defeats, but is ever at hand to give guidance and counsel to Republicans when they win.

And that counsel is always the same: Time to put the acrimony behind us. Time to reach out and take the extended hand of the defeated. Time come together to end gridlock and move forward. And invariably this means move in the same old direction, if a bit more slowly.

Consider several areas where the kumbaya temptation is strongest.

The first is the rising clamor from Corporate America for the newly empowered Republicans to grant Obama fast track authority and support his Trans-Pacific Partnership Agreement.

Fast track would be a unilateral surrender of Congressional authority, yielding all power to amend trade treaties to Obama, and leaving Congress with a yes or no vote on whatever treaty he brings home.

This would be a Republican ratification of the policies of Bush I and II that produced $10 trillion in trade deficits, hollowed out our manufacturing base, and sent abroad the jobs of millions of Reagan Democrats.

Globalization carpet-bombed Middle America and killed the Nixon-Reagan coalition that used to give the GOP 49-state landslides.

Why would Republicans return to that Bush-Clinton-Obama policy that ended the economic independence of Eisenhower's America?

The party should re-embrace economic patriotism, stand up to Japanese protectionists and Chinese currency manipulators, and put American workers first, ahead of corporate outsourcers.

Immigration reform is a second area where the GOP is being urged, even by some of its own, to compromise. In return for Obama agreeing to improve border security, Republicans will be asked to go along with amnesty for millions here illegally.

But did any Republican run on amnesty? Is the nation demanding amnesty? If not, then who is?

Republicans should pass a stand-alone border-security bill, and then dare Senate Democrats to filibuster it and dare the president to veto it.

If Obama declares an executive amnesty for five million illegals, as he threatens, he can credibly be charged will defying the manifest will of the nation and usurping Congressional power. The GOP would then be within its rights to declare all-out political warfare.

Let voters decide in 2016 whether invaders should be rewarded with paths to citizenship or whether presidents should be duty-bound to defend the border.

A third temptation will be Obama's request for Congress to formally authorize the war he has begun in Syria and Iraq. If the GOP signs on, the party will own that war going into 2016, as it owned the Iraq war going into 2006, when it lost both houses of Congress.

That the Islamic State is brutal, barbaric and anti-American is undeniable. But its occupation of northern Syria and western Iraq is the problem primarily of Syria and Iraq, and their neighbors in Lebanon, Turkey, Iran, Kurdistan, Saudi Arabia and Jordan.

This is, first and foremost, their war, not ours.

Before succumbing to the kumbaya temptation, Republicans should ask themselves not how to find common ground with Barack, but how to get America out of this Slough of Despond.

And anyone who thinks last Tuesday was a call to compromise with Obama has either an ax to grind or a serious hearing problem.