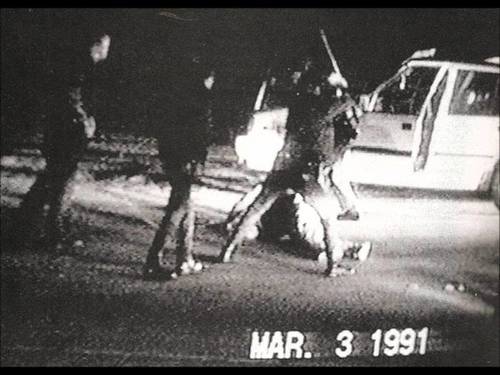 Rodney King, age 47, was found dead at the bottom of his swimming pool.

King wasn't the best swimmer, but he was a tough guy. He could take a licking and keep on ticking. If you had just led two dozen policemen on a 100mph chase, and now the adrenaline-crazed cops were all over you, you'd probably stop fighting back and give in after the eighth or twelfth baton blow. Not Rodney King.

One fact that isn't part of the standard narrative is that the cops who whomped on him had to be tried twice (the concept of double jeopardy not applying in this case), and the second jury only unanimously agreed that a single one of the scores of blows landed on King was unjustified beyond a reasonable doubt. From the L.A. Times on 4/23/1993:

Jurors also played and replayed the best evidence in the case—the videotape of the beating that had been taken by an amateur and enhanced by the FBI.

"We went through it frame by frame, slow-motion, fast-motion, God I don't know how many times we watched that thing," Juror No. 9 said.

The tape, made by a bystander, could not answer all their questions. It was blurry at one crucial moment after King was struck and fell to the ground. Some jurors said they could see Powell using his baton to bash the fallen King in the head. But others had difficulty seeing head blows, even when the tape was viewed frame by frame.

All could see a powerful blow that Powell later landed across King's chest. King was on the ground at the time, on his back.

"That chest blow was unreasonable and we felt it was not to effect an arrest but just to hurt the guy," No. 9 said. "That convinced about a third of us."

King was a battler.