History Repeats in Ferguson as MSM Covers for Rioters 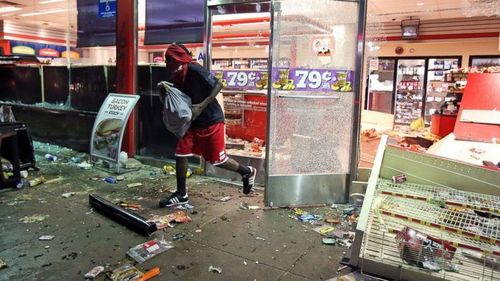 Ferguson, Missouri in is in flames after the police shooting of a young black man, and the Mainstream Media has already decided that white violence against peaceful protesters will be the explanation—regardless of the facts on the ground. Whether this is to whip up black turnout for the midterm elections or because of an eternal Narrative of white guilt is unclear. However, what’s all too evident is that Leftist reporters seem blithely unaware of their past distortions during the Trayvon Martin/George Zimmerman controversy. Indeed, they feel emboldened to repeat them over and over again in a never-ending smear campaign against the historic American nation.

After the shooting of Trayvon Martin, an entire nation witnessed how reporters deliberately distorted the facts in order to create anti-white propaganda. Hispanic George Zimmerman was magically transformed into a white man. The shooting of Trayvon Martin was discussed as a “hate crime” and George Zimmerman’s right to use self-defense was condemned, even by some “conservatives.” Despite Martin’s attack on Zimmerman, it was Martin who was portrayed as the “victim.”

This went beyond mere bias. Early childhood photos of Martin were affixed to news stories. Zimmerman’s 9-1-1 call was liberally edited to make him sound preoccupied with Martin’s race.

Of course, after Zimmerman’s acquittal, journalists famously recanted, apologizing for biased reporting that stoked nationwide racial anger and hostility. Next time, they said, they would wait until all relevant information was available before stating conclusions, present conflicting accounts in an evenhanded way, and avoid the subtle use of language crafted to suggest things untrue or unproven.

For example, the Tampa Bay Times ran a series on Stand Your Ground laws in the wake of the Trayvon Martin shooting. It used Buzzfeed-style headlines that connected these laws to the incident—even though no such connection existed. Nonetheless, the Tampa Bay Times intoned:

Today, the shooting death of Trayvon Martin, an unarmed black teen, by a Hispanic neighborhood watch captain has prompted a renewed look at Florida's controversial law.

[Florida 'stand your ground' law yields some shocking outcomes depending on how law is applied by Kris Hundley, Susan Taylor Martin, and Connie Humburg, June 1, 2012]

Naturally, it was the Times itself that “prompted” the look at Stand Your Ground laws, which are “controversial” even though more than half of the states have some version of them.

The investigation earned the Tampa Bay Times a prize in “Online Journalism.”

A glance at the coverage following the shooting of Michael Brown shows these bad habits are continuing and are being exploited by left wing activists. Benjamin Crump, the lawyer hired by the Martin family in 2012, has also been hired by Brown's family. [Michael Brown’s family hires civil rights attorney Benjamin Crump, TheGrio, August 11, 2014]

As of this writing, little concrete is known about the shooting. The officer and Johnson have given conflicting accounts of the details. The officer’s account has Brown attacking him in his car and attempting to take his weapon. Johnson’s account has the officer creating a confrontation out of nothing, shooting Brown at point blank range, and then shooting him again several times after he attempted to flee. [What we know about Michael Brown’s shooting, by Chris Patterson, 58 News, August 14, 2014]

It is understandable for an individual to hear these two accounts and decide that one is more believable than the other. But it is not the role of journalists to speculate. Their job is to report facts and relay information from informed sources.

This is a job that most journalists are unable or unwilling to do. Instead, they have given in to the temptation to covertly broadcast their own points of view—or those they think will earn awards and recognition.

The bias can sometimes appear quite subtle within the strange, disaffected posture of journalistic prose. But even this detached style is a tactic designed to conceal bias and convey disinterestedness and authority.

For example, a New Yorker article about Brown’s shooting uses the word “remember” to describe unofficial accounts of the incident. In contrast, the article calls the police’s account merely a “story” and sums it up in a garbled run-on sentence:

People in the neighborhood have told reporters that they remember what happened next as a series of movements: the officer, it seemed to them, trying to put Brown into a car; Brown running with his hands in the air; the policeman shooting; Brown falling….

[St. Louis Police Chief Jon] Belmar, in his press conference on Sunday morning, told a story that involved Brown walking with another young man when the door of a police car they were passing opened and, for some reason, one of them forced his way into the police car and tried to get the officer’s gun. [

[Why did Michael Brown die in Ferguson, by Amy Davidson, The New Yorker, August 11, 2014. Bold mine; italics in original]

Rather than let us make up our own minds, New Yorker writer Amy Davidson has decided for us which account we should put more stock in, even adding emphasis to the part of the police’s account she personally finds most dubious.

Other news outlets have structured their stories so the reader encounters a version that condemns the police first (sometimes in the journalists’ own dramatic language) and the officer’s version only later. For example:

The last moments of Michael Brown’s life were filled with shock, fear and terror, says a witness who stood just feet away as a police officer shot and killed the unarmed teen.

As another tactic, many news sources have chosen to mince words about what is actually happening in Ferguson. For example, the Wall Street Journal simply called the riots “unrest”. [FBI Probes Missouri Teen’s Shooting, by Ben Kesling, Mark Peters, and Devlin Barrett, August 12, 2014]

Even President Obama got in on the J-speak, calling the riots “strong passions” in his statement on August 12. [President Obama releases Michael Brown statement, by Julie Pace, KSDK, August 12, 2014]

The purpose here is to downplay the violence that is occurring in Ferguson, supporting the narrative that police are overreacting for no reason.

This isn’t really surprising. After all, it was just revealed that a secretive 1,000 group of journalists exists to shape media coverage – a kind of successor group to the infamous “Journolist” exposed a few years ago. [1,000-member secretive progressive journalist group uncovered, Breitbart, August 6, 2014]

Of course, there is an agenda. And Americans need to be aware of it and learn how to expose it.

After all, the MSM entitled to its own opinions—but not its own facts.

Boss Aktuba [Email him] once hid his identity because he worked in the Hollywood film industry. Now he's moved back to the Midwest and works in software development, and continues to use the obviously fake name “Boss Aktuba” because he just wants to keep his family safe in spite of his mainstream–but, to elites, radical–views. He writes in whatever spare time he can find.