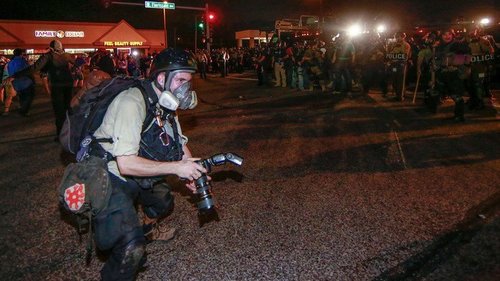 The most poisonous "-ism" now infecting Ferguson, Missouri, is not virulent racism. It's viral narcissism.

Over the past two weeks, the impoverished St. Louis County suburb has become a magnet for self-absorbed publicity seekers of all colors and agendas.

Perhaps the most repulsive species on display in Ferguson is the Journalisto Vanitatis. This breed of egotistical East-Coast reporters can be easily identified by its ever-present appendages: a smartphone and smart glasses. For the J.V., the story is all about "me, me, me!" Huffington Post reporter Ryan Reilly and Washington Post reporter Wesley Lowery were among the first and most prominent Beltway journos to parachute into the Ferguson protests.

Admiring media colleagues hang on the J.V.'s every tweet and selfie. When Reilly and Lowery were "arrested" (that is, detained briefly and released) amid the chaos, they morphed into civil rights heroes. Both complained indignantly about not being read their "Miranda rights." Never mind that they were neither arrested nor interrogated, the two basic preconditions for Miranda warnings.

The J.V.'s have been hailed for their "courage" on the "front lines"—like veritable 21st-century versions of Audie Murphy and Ernie Pyle! Of course, Audie Murphy and Ernie Pyle would know real bullets when they saw them. But Reilly revealed his abject cluelessness this week when he hysterically tweeted a photo of what he thought were "rubber bullets." They turned out to be high-capacity... ear plugs.

Not to be outdone, J.V. Chris Hayes of MSNBC squealed about being threatened with mace and simpered about being confined in a press area—created by police for the safety of meandering interlopers gawking at rioters and looters. Later, he breathlessly trumpeted seeing a "dead body," which turned out to be neither dead nor a body.

While New York journalists have applauded reporters making themselves a part of the story, locals demonstrated their own opinion of MSNBC's journalism on Monday night—by pelting Hayes and one of his co-anchors with rocks.

A close cousin of the Journalisto Vanitatus is the omnipresent Albinus Hipsterex. These white progressives can't resist the opportunity to raise their fists and chant "F**k the police" to show they're down with the cause. Leftovers from the defunct Occupy Wall Street movement are now occupying West Florissant Avenue in Ferguson to make excuses for the vandals and thieves victimizing immigrant-owned convenience stores. The absurdity of these critters was best illustrated earlier this week in a candid photo of a trio of Albinus Hipsterii: two bandana-clad, tattooed anarchists strapping a gas mask onto a young woman sporting a tie-dyed shirt stretched across her heavily pregnant belly.

Next on the scene: Canis Celebritus—also known as the Celebrity Hound Dog. Rapper Nelly best epitomizes this attention-seeking creature. He jetted down to Ferguson to preach peaceful social justice. Some in attendance took note of the wealthy rapper's ostentatious protest attire: massive diamond earrings as big as some of the rocks protesters hurled at hapless Hayes. Not-so-wise Nelly told residents not to "overreact," while accusing police of purposefully inflaming protesters in the same breath. He lectured the crowd to have a plan. But when asked to outline his own, he said he didn't have one, and his large megaphone went silent.

From the L.A. riots to Hurricane Katrina to Ferguson, an eternal truth endures: Tragedy is the mother of poisonous pretension.

Article
Ann Coulter: Antifa Are A Laugh Riot—Until They Come For You

Post
After Robert The Bruce's Statue Was Vandalized By BLM, The National Trust For Scotland Apologized To Blacks For The Medieval King's Racism

Post
Sailer In TakiMag On Althea Bernstein: Putting Out the Fire with Lighter Fluid

Post
One Good Effect of Lockdowns: Girls Are de-Transitioning Back to Being Girls

Post
The Real Reason the NYT Will Uppercase "Black" But Not "White"
MORE...
POPULAR TAGS