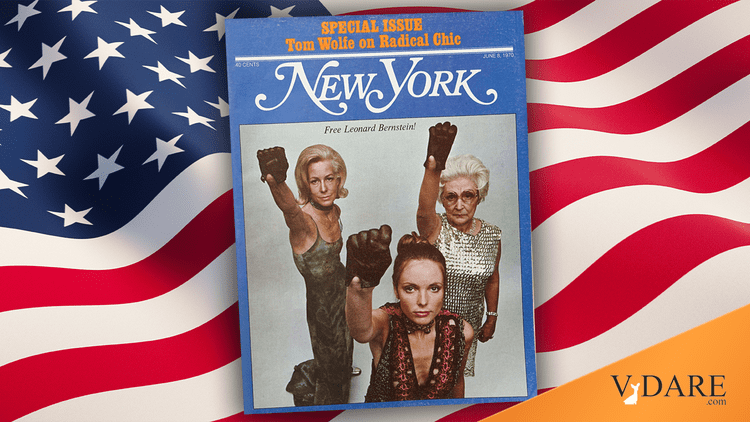 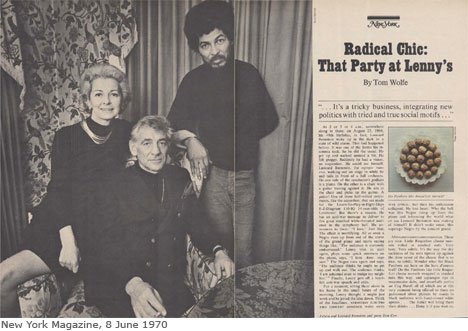 Watching the convenience store security camera video of Michael Brown shoving aside the Indian or Arab store owner who tries to stop him from stealing cigars, and then learning that in vengeance the mob had looted and burned the wrong convenience store (painting “Snitches get Stitches” on the wall), I was reminded of poor Lenny Bernstein’s come-uppance in Radical Chic.

Mau-Mauing the Flak Catchers was only the second half of Tom Wolfe’s 1970 book. (Here’s a version annotated with Wolfe’s comments in 2014.) The more famous first half was Radical Chic about the fundraising party that conductor and composer Leonard Bernstein had thrown for the Black Panthers. Standing at the summit of American cultural life in the 1960s, Bernstein subsequently suffered from a backlash from many of his fellow Jews who recognized that in hosting the Panthers, who “taxed” (i.e., shook down and strong-armed) Jewish merchants in the slums, Bernstein had lost touch with his roots among petty bourgeois Jewish merchants. They were finding the rising tide of black assertiveness and violence less than an unmixed blessing if you owned a liquor store in the ghetto. 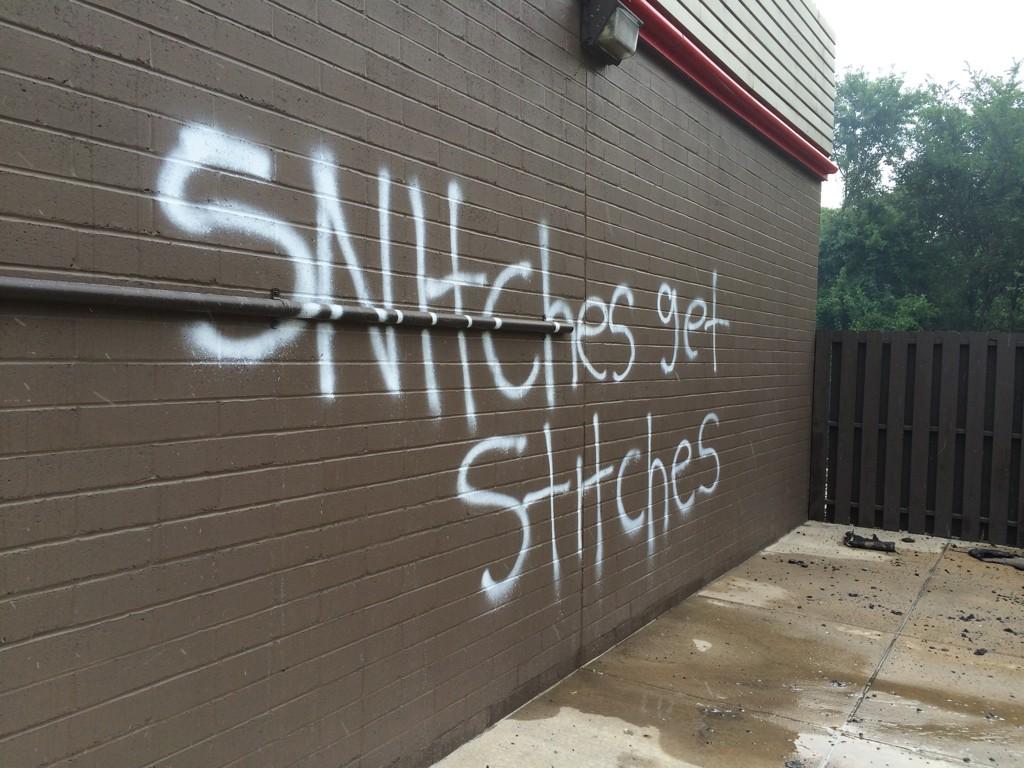 Indeed, much of the rise of neoconservatism in the late 1960s can be traced to Jewish intellectuals who felt loyalty toward their store-owner relatives who were increasingly victimized by black thugs. Today, however, few Jews actively manage small shops in black neighborhoods — Michael Brown’s victim was probably Muslim or Hindu — so the level of realism that Bernstein ran into in the media in 1969 is dissipating.

In New York magazine, Wolfe wrote of the reaction to the party after social editrix Charlotte Curtis had written it up (hilariously) for the society section of the New York Times:

But if the Bernsteins thought their main problem at this point was a bad press, they were wrong. A controversy they were apparently oblivious of suddenly erupted around them. Namely, the bitterness between Jews and blacks over an issue that had been building for three years, ever since Black Power became important. The first inkling the Bernsteins had was when they started getting hate mail, some of it apparently from Jews of the Queens-Brooklyn Jewish Defense League variety. Then the League’s national chairman, Rabbi Meir Kahane, blasted Lenny publicly for joining a “trend in liberal and intellectual circles to lionize the Black Panthers . . . We defend the right of blacks to form defense groups, but they’ve gone beyond this to a group which hates other people. That’s not nationalism, that’s Naziism. And if Bernstein and other such intellectuals do not know this, they know nothing.”

The Jewish Defense League had been formed in 1968 for the specific purpose of defending Jews in low-rent neighborhoods, many of which are black. But even many wealthier and more cultivated Jews, who look at the Defense League as somewhat extremist, Low Rent and gauche, agreed essentially with the point Kahane was making. One of the ironies of the history of the Jews in America was that their long championship of black civil liberties had begun to backfire so badly in the late 1960s. As Seymour Lipset has put it, “The integrationist movement was largely an alliance between Negroes and Jews (who, to a considerable extent, actually dominated it). Many of the interracial civil-rights organizations have been led and financed by whites, and the majority of their white members have been Jews. Insofar as a Negro effort emerged to break loose from involvement with whites, from domination of the civil-rights struggle by white liberals, it meant concretely a break with Jews, for they were the whites who were active in these movements. The Black Nationalist leadership had to push whites (Jews) ‘out of the way,’ and to stop white (Jewish) ‘interference’ in order to get whites (Jews) ‘off their backs.’” 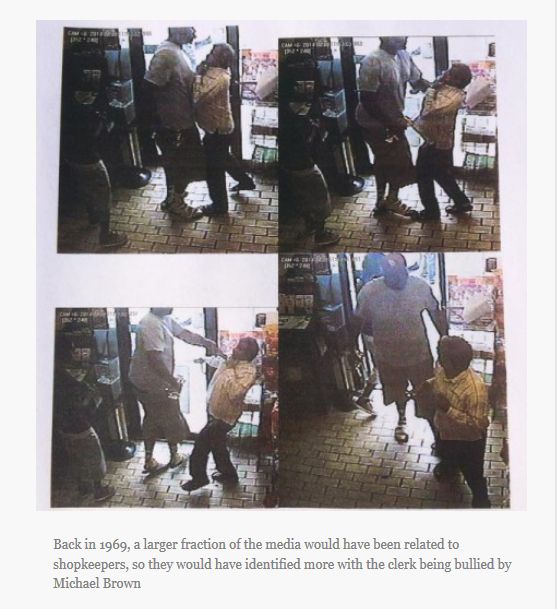 Meanwhile, Black Power groups such as SNCC and the Black Panthers were voicing support for the Arabs against Israel. … But many Jewish leaders regarded the anti-Zionist stances of groups like the Panthers as a veiled American-brand anti-Semitism, tied up with such less theoretical matters as extortion, robbery and mayhem by blacks against Jews in ghetto areas. …

… In any case, given all this, people like Lenny and Felicia could hardly have been expected to comprehend a complex matter like the latter-day friction between blacks and Jews.

To other people involved in Radical Chic, however, the picture was now becoming clear as day. This was no time for Custer’s last stand. This was time . . . to panic.

On Saturday evening, the 24th, the Duchins, the Stantons, Sidney and Gail Lumet, and Lenny and Felicia met at the Bernsteins’ to try to think out the whole situation. Sidney Lumet was convinced that a new era of “McCarthyism” had begun. It was a little hard to picture the editorial and women’s page staffs of the Times as the new Joe McCarthy—but damn it . . . The Times was pushing its own pet organizations, the NAACP, the Urban League, the Urban Coalition, and so on. Why did it look like the Times always tried to punish prominent Jews who refused to lie down and play good solid burghers? Who was it who said the Times was a Catholic newspaper run by Jews to fool the Protestants? Some professor at Columbia . . .

Probably Rudolf Flesch, author of The Art of Readable Writing, which I read before I read any Tom Wolfe, which might help explain why we are on similar wavelengths.

In any case, they were now all “too exposed” to do the Panthers any good by giving parties for the Panthers in their homes. They would do better to work through organizations like the NAACP legal defense fund.

Lenny couldn’t get over the whole affair. … Unbelievable hostility was still bubbling around him. In Miami, Jewish pickets forced a moviehouse to withdraw a film of Lenny conducting the Israel Philharmonic on Mount Scopus in celebration of Israel’s victory in the Six-Day War. …

Fools, boors, philistines, Birchers, B’nai B’rithees, Defense Leaguers, Hadassah theatre party pirhanas, UJAviators, concert hall Irishmen, WASP ignorati, toads, newspaper readers—they were booing him, Leonard Bernstein, the egregio maestro . . . Boooooo. No two ways about it. They weren’t clearing their throats. They were squeezed into their $14.50 bequested seats, bringing up from out of the false bottoms of their bellies the old Low Rent raspberry boos of days gone by. Boooooo. Newspaper readers! That harebrained story in the Times had told how he and Felicia had given a party for the Black Panthers and how he had pledged a conducting fee to their defense fund, and now, stretching out before him in New York, was a great starched white-throated audience of secret candystore bigots, greengrocer Moshe Dayans with patches over both eyes . . .

But times have changed. These days, very few people of power and influence in the media still have an uncle who works behind a counter in a place like Ferguson. So, the prestige press on average is increasingly heading toward being as out of touch as Lenny Bernstein was in 1969.