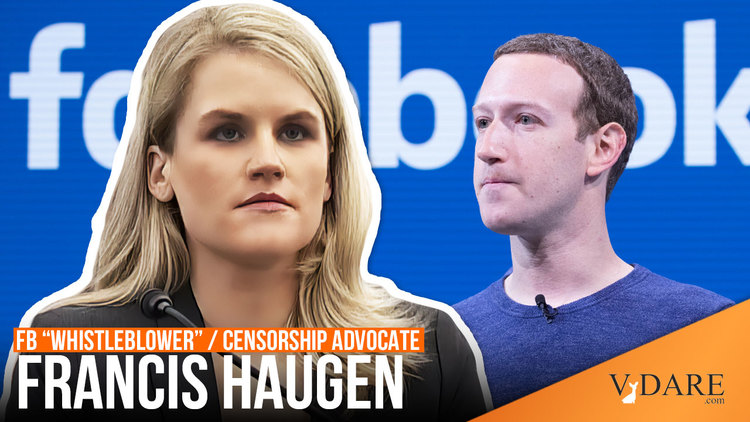 Washington D.C. and the Regime Media are ululating about Facebook “whistleblower“ Frances Haugen, a former middle manager whose defection from the Big Tech behemoth set Democrat and Republican hearts aflutter. They all see her as a heroic champion who exposed her former employer’s misdeeds. But Conservatism Inc. and even some sensible patriots don’t really understand her message: she thinks Facebook allows too much free speech and the government must force it to censor more. That’s the opposite of what we need the government to do.

Haugen’s message isn’t exactly hard to understand. Indeed, she’s explicit about it. She wants more censorship, because Facebook permits too much “Hate” speech, meaning speech she hates. She would have listeners believe the tech giant’s algorithms allow it to flourish [Facebook whistleblower revealed on '60 Minutes,' says the company prioritized profit over public good, by Clare Duffy, CNN, October 4, 2021].

Anyone with a brain knows that isn’t true. Facebook banned “white nationalism” back in 2019, then promptly suspended any account accused of the grave crime. It censored discussion of “The Great Replacement” and explicitly prohibits ads it claims denigrate immigrants and minorities [Zuckerberg: Facebook will prohibit hate speech in its ads, by Salvador Rodriguez, CNBC, June 26, 2020]. (VDARE.com was banned, apparently as part of Facebook’s anti-Trump drive, in 2020.) Then Facebook even banned POTUS 45, while he was in still office. Only those living in a fantasy world would believe Haugen.

But this is why Democrats represent and coach her: they’re simpatico on future censorship [Facebook Whistleblower Is Leftist Activist Repped By Lawyer For ‘Whistleblower’ Behind Trump Impeachment, by Luke Rosiak, Daily Wire, October 5, 2021].

Haugen’s demand: the government should revise Section 230 of the Communications Decency Act of 1996 to make tech giants legally liable for “hateful” content. Users could sue Big Tech platforms if they see content that offends them.

Several patriot and populist figures have called for lawmakers to revise Section 230 as well, but instead to make the tech giants defend free speech, not push them to censor more. Section 230 grants tech platforms immunity from publisher liabilities because they supposedly act as neutral forums. Of course  the platforms are clearly violating  the spirit of the Section 230, but Haugen’s proposals would make censorship the letter of the law [Activist, Leftist Facebook Whistleblower Demands Congress Regulate Social Media Platforms, by Emily Zanotti, Daily Wire, October 5, 2021].

Significantly, Big Tech doesn’t mind. It actually wants more government regulation and more rules defining how their myriad platforms must act. As long as they aren’t broken up, this situation works for them. They keep their power and receive full approval to censor as much as they please.

In other words, despite what you’re reading in the Regime Media, Haugen’s message doesn’t threaten the tech giants. It simply justifies another Democrat power grab [Democrats and Media Do Not Want to Weaken Facebook, Just Commandeer its Power to Censor, by Glenn Greenwald, Substack, October 5, 2021].

But even Respectable Right publications such as Daily Wire and Breitbart do see through Haugen and warn that her agenda is antithetical to conservative interests [Far Left Facebook Whistleblower Frances Haugen Working with Trump Impeachment Lawyers, by Allum Bokhari, Breitbart, October 5, 2021]. The Daily Wire, the creation of Ben Shapiro, should be especially concerned considering how much his operation needs Facebook and other Big Tech social media, and how much Leftist journalists nevertheless want his gravy train to end [How Ben Shapiro Is Using Facebook To Build An Empire, by Miles Parks, NPR, July 19, 2021].

But the usual suspects, Conservatism Inc., and some Republican lawmakers, were seemingly too distracted by Haugen’s attacks on Facebook to notice her true message. They even support her. Thus Rachel Bovard, a prominent Populist Inc. commentator, praised Haugen because Facebook “commodifies” children. She says she doesn’t care about Haugen’s political motivations:

Republican senators appeared to agree with most of what Haugen said. Only one senator, Ted Cruz, asked about her censorship bent. Haugen easily batted him away without any follow-up. Every other GOP senator at the hearing asked about how Facebook spreads harmful content—meaning marketing to children—and nodded in bovine agreement as Haugen warned about the “Hate Speech” machine. Even Leftist outlets noted how submissive Republicans were, never pushing her on the free-speech issue [The Facebook Whistleblower Finally Got Republicans to Stop Yapping About Anti-Conservative Bias, by Aaron Mak, Slate, October 5, 2021].

That’s not good. We need Republicans to focus on the central problem of Big Tech, which isn’t mean tweets or algorithms gone awry. It’s how the tech giants control political discourse and suppress viewpoints they don’t like.

Mainstream conservatives and patriots have embraced myriad attacks on tech giants because they hate its Leftist bias, but their solutions don’t address censorship.

One such idea: antitrust actions. Obviously, Big Tech must be cut down to size. It uses its power to crush free speech alternatives such as Gab. Antitrust actions would give competitors a better chance to succeed.

But the proviso is that free speech must be preserved. Many Republicans and patriots have forgotten that and happily ally with censorious Leftists who also want to break up the tech giants. However, that won’t help the cause. For instance, right now Leftists are using antitrust legislation and litigation to pressure Big Tech to censor more. Thus a lawsuit filed by New York’s attorney general Letitia James against Facebook was done in part to pressure the company to censor “misinformation” and other “objectionable content” [Democrats Using Antitrust to Demand More Big Tech Censorship, by Allum Bokhari, Breitbart, January 3, 2021].

And there’s more. Congress unveiled five bills to initiate antitrust actions last summer. They earned support from a number of House Republicans who want to curb the tech industry’s power. But again, most would empower the Biden Regime and its Leftist bureaucrats to impose their will on the tech giants, and that will mean more censorship. The poster girl: Lina Khan, the London-born Pakistani chairman of the Federal Trade Commission, who earned bipartisan support for her confirmation. Twenty-two Republicans, including much-touted tech critic Josh Hawley, voted for her. Rachel Bovard cheered Kahn in The Federalist, arguing her confirmation “put Big Tech on notice” [Lina Khan’s Confirmation As FTC Chair Puts Big Tech On Notice, June 17, 2021].

But like all Leftists, Khan wants to go after Big Tech for not censoring enough. She has written about the plague of “disinformation and inflammatory content” on social media. She helped aid an investigation by the House antitrust subcommittee that alleged social media were bad because they allowed conservative news stories to go viral on its platforms [Democrat Led Antitrust Bills Are a Massive Gamble, by Allum Bokhari, Breitbart, June 17, 2021]. Khan has worked closely with Sandeep Vaheesan, another South Asian legal scholar, who argues that the FTC must be used as a “progressive secret weapon” that tackles “structural racism.” Khan has the power to act on that crazy recommendation [FTC Chair Lina Khan’s Co-Author: Use Antitrust to Address ‘Structural Racism,’ by Allum Bokhari, Breitbart, June 22, 2021].

And Kahn might be able to do that, thanks to Haugen’s media blitz. She can expect a lot of good press if she pledges to use her powers to attack Facebook’s alleged tolerance of “hate speech.”

All this means one thing: patriots can’t get sidetracked. Granted, reducing the size of these gargantuas is a good thing. But our main job is protecting free speech. Joining forces with Leftists on antitrust measures harms us, not Big Tech.

Republicans must focus on revising Section 230 so it explicitly protects all political speech. antitrust moves must wait until that is accomplished.

Sen. Hawley and Arizona Rep. Paul Gosa have already proposed separate bills that would give Section 230 more teeth to protect free speech. Tennessee Sen. Bill Hagerty has proposed a bill that would establish tech platforms as “common carriers,” which would open them to all and require them to protect free speech under their moderation policies [GOP senator proposes declaring Big Tech ‘common carriers’ to stop censorship, by Steven Nelson, New York Post, April 27, 2021].

All of these bills would protect free speech and give patriots and other dissidents a fighting chance in court against tech censorship.

They are far more worthy of patriot attention than Haugen’s hysteria.