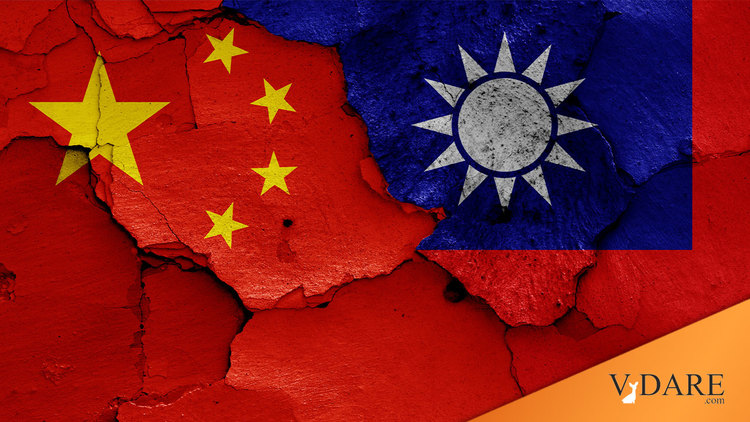 Patrick J. Buchanan: Are China's Threats To Taiwan A Bluff?

The U.S. State Department countered by issuing a stern statement warning Beijing about the adverse effect on regional "stability" of such "provocative military activity."

Yet even as the waves of Chinese military aircraft entered Taiwan's air defense zone, President Joe Biden was reassuring Japan's new Prime Minister Fumio Kishida that the U.S. would defend the Senkakus from any Chinese attack.

Controlled by Japan but claimed by China, the Senkakus are uninhabited rocks in the East China Sea.

Our alliances in the Pacific dating to the 1950s have put us in an odd position. The Biden administration says it will fight to defend the Senkakus and fight if the Philippines attempt a military retrieval of atolls and reefs in the South China Sea that China has seized, occupied and fortified.

For Taiwan, however, a democratic island of 14,000 square miles and 23 million people, and for Hong Kong, a formerly free city of 7 million, we will not commit to fight—though human rights and democracy are said to be central to the Biden foreign policy.

We will fight for Japan's right to hold the Senkakus and Manila's right to retrieve Mischief Reef, but not to ensure the rights of the 30 million people of Hong Kong and Taiwan.

What is China, dispatching bombers and fighters around the southern and eastern coasts of Taiwan, up to?

This is an unmistakable message to America that, about Taiwan, Beijing is serious. China is warning the U.S. and its allied and associated powers—Australia, Japan, India—that it will, in the last analysis, fight to prevent an independent Taiwan.

Taiwan is a red line for China. Is it for us?

This latest challenge comes after the public humiliation of the United States in Afghanistan, about which China has been crowing since August.

Yet, these four days of Chinese intrusions into the air defense zone of Taiwan do not necessarily portend an imminent invasion or attack.

The stakes involved here are huge, but who would benefit from such a war?

If after the fall of Afghanistan and the humiliation of the U.S. defeat and departure, the U.S. abandoned Taiwan, U.S. credibility would be shot in Asia. Asia and the world would conclude that China owned the future.

As for credibility, China has a well-established record.

China started and finished the recent war in the Himalayas with India. It warned Hong Kong to stifle the democracy protests that went violent in 2019. When Hong Kong failed to do so, Beijing acted and is now completing the full absorption of the city into the mainland.

On its warnings and threats, China tends to follow through.

Of all the islets and reefs in the South China Sea it has taken from Vietnam, the Philippines and other neighbors, China has surrendered not a one. Though charged with "genocide" against the Uyghurs, it has persisted in its persecution, as it has in its suppression of Tibetans and Christians.

Chinese President Xi Jinping and his party are unapologetic about their Communist values and Marxist beliefs.

China is facing energy shortages and blackouts from a lack of fuel for its coal-fired power plants, its primary source of energy.

After decades of a "one couple, one child" policy, China is facing a demographic crisis. In parts of the country, deaths now exceed births. China's women have a fertility rate below replacement levels. China is aging and shrinking, and declining populations correspond with declining powers.

China will never relinquish its claim to Taiwan, whose independence is recognized today by only a handful of nations.

China is a nation many fear and respect, but whose regime few see as a friend. For Beijing has historic claims in every direction—on lands held by Russia and India, and to islands and reefs claimed by Vietnam, Malaysia, Singapore, Brunei, the Philippines and Japan. It has a claim on Taiwan and on all the islands Taiwan claims in the East and South China Seas.

Yet, though facing the world's most menacing power 100 miles away, Taiwan, as of 2019, was still spending less than 2% of GDP on defense.

Refusing to invest in your own defense, and relying on America to come and fight your wars, seems to be a tradition with America's allies.