#Brexit Shows Victory Is Possible In America, Too

No one in the British political class wanted #Brexit. Not Prime Minister David Cameron, not the Leader of the Opposition, not the Liberal Democrats nor the Scottish nor the Welsh nationalists, not the Main Stream Media, not the Leftist “comedians” like British-born John Oliver, to whom progressives increasingly look to shape opinion.

Yet the once-quixotic crusade of Nigel Farage and Boris Johnson has ended in victory, as Great Britain voted to leave the European Union. It’s proof that support for the populist right is always understated, as it is never given a voice in the Main Stream Media.

This victory has proven a shock to the global markets and to the political system. But patriots should not be frightened off by the ensuing disorder. And although it is too early to say #Brexit means the United Kingdom will finally stop Third World immigration, there are many reasons for hope. 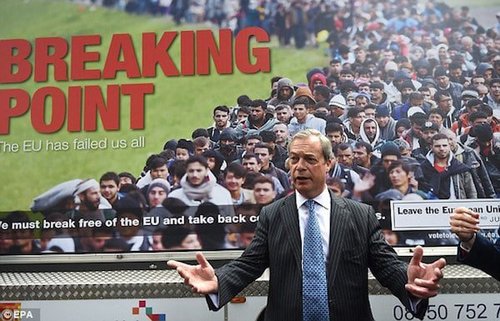 The #Brexit vote showed the British people resisted attempts at moralshaming. As the vote neared, the British tried to scare off Leave campaigners by calling them anti-immigration bigots. One focal point for this smear: a billboard promoted by United Kingdom Independence Party (UKIP) leader Nigel Farage which showed a huge number of Third World immigrants on the march and the words “Breaking point: The EU has failed us all.” This powerful image was described as an example of “racial hatred” and—such is the state of political liberty in the U.K.—was even reported to the police [Nigel Farage’s anti-migrant poster reported to police , by Heather Stewart and Rowena Mason, The Guardian, June 16, 2016]

But the most spectacular example was the MSM campaign to link the murder of Pro-Remain Labor M.P. Jo Cox with the Leave movement. The accused murderer, although apparently insane, did state in court his name was “Death to traitors, freedom for Britain.” After the murder, polls showed Remain regaining ground and the betting markets strongly favored a Remain vote. 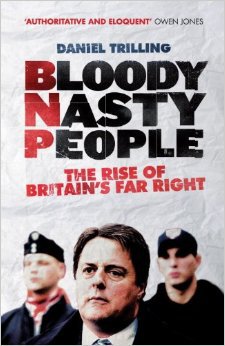 In her maiden speech to Parliament, delivered just last year, Ms. Cox argued that immigration had “deeply enhanced” the community she had been elected to represent. “While we celebrate our diversity,” she said, “what surprises me time and time again as I travel around the constituency is that we are far more united and have far more in common with each other than things that divide us.” The best response to her death is to resist those voices, wherever they emerge, that tell us if only we got rid of the aliens and traitors, our societies would be great again.

But, as nationalists have observed, Cox’s compassion was highly selective. Though she was a passionate advocate of more immigration, she was seemingly indifferent to the multiplying cases of sexual abuse of English girls by Third Worlders taking place throughout the country—even just a few miles from her constituency. At almost at the same time Cox met her fate, it was revealed a schoolgirl from nearby Halifax was preyed on by as many as 100 mostly “Asian” [Middle Eastern] men over the course of two years. [How 100 men were able to prey on one vulnerable Halifax schoolgirl for two years, Yorkshire Post, June 17, 2016]

Cox’s constituents were of course distressed by her murder. But even some of those people quoted praising her in the media and attending the ceremonies memorializing her went on to vote ‘Leave’ just a few days later [Jo Cox, The Brexit Vote, and the Politics of Murder, by Ed Caesar, The New Yorker, June 24, 2016]. A solid majority of Jo Cox’s district voted to leave the European Union—55 percent to 45 percent, with 70 percent turnout [A week after her brutal death, Jo Cox’s district votes to leave the EU, by Aamna Mohdin, Quartz, June 24, 2016]

The most famous community victimized by Muslim “grooming gangs” is, of course, Rotherham. It voted 68 percent Leave to only 32 percent Remain, suggesting voters there linked the European Union to the sex slavery of English girls perpetuated by Muslim immigrants [Rotherham votes strongly to leave EU, by Adele Forrest, Rotherham Advertiser, June 24, 2016]

Most of these communities were once considered Labour strongholds and many are still represented by Labour Councilors and MPs. [EU Referendum: Yorkshire results back leave, BBC, June 24, 2016].

The divisions within the Labour Party are arguably greater than those within the Conservatives, as Labour leader Jeremy Corbyn is facing a revolt from within his own ranks from those who feel he didn’t do enough to promote Remain. Early next week, there may even be a vote of no confidence within the party.  [‘Brexit’ vote roils opposition Labour Party, by Steven Erlanger, The New York Times, June 26, 2016]

There is a very real possibility we are looking at the end of the Labour Party itself. After all, working class whites really don’t have anything to gain from being in the same political grouping as apologists for finance capitalists pushing mass Third World immigration and cheap labor.

What’s more, the referendum will give new life to the push for Scottish “independence”—or what should perhaps be called Scotland’s desire to be subsidized by Europe instead of the UK. This is not a bad thing. Scottish independence would both be likely to shock the north out of its Leftism and also give new life to other ethnonationalist movements, including, of course, that of the English people itself.

Out of fear of encouraging those movements, especially in Spain and Belgium, it’s unlikely the EU would accept Scotland anyway.

In any event, any devolution, any shock to the political status quo, is a gain for immigration patriots—because if things continue as they have been, no European nation will continue to exist.

Of course, faced with the common threat of mass immigration, it could be argued what we need is more European unity, not less. And #Brexit had mixed messages on immigration. [Beyond Brexit, by Hannibal Bateman, Radix, June 24, 2016] Leave’s Boris Johnson has even suggested #Brexit will allow more non-European immigration. As he put it:

As this shows, #Brexit doesn’t guarantee victory for British patriots. But victory was essentially impossible under the current European Union. After all, the leaders of the European Union have openly declared “there will be no debate or dialogue with the far right” and “have vowed to block all right wing populists from power across the continent”. [Showdown: EU Vows To Use New Powers To Block All Elected ‘Far Right’ Populists From Power, by Liam Deacon, Breitbart, May 24, 2016]

The MSM is treating the #Brexit vote as a kind of giant temper tantrum by elderly, out of touch British voters willing to put national pride over their concrete interests. But #Brexit is the most rational thing in the world. What is irrational is inviting an unlimited number of Muslim migrants and then acting surprised when things start going wrong.

The image of a European Union which would actually defend the Continent against existential threats is attractive. But what we have here is an anti-European Union, seemingly designed to destroy the culture, identity, and way of life in every Western homeland.

#Brexit is not the final victory. But it allows the possibility of victory. It makes it harder for the hostile elite to maintain control.

And most importantly of all, it suggests Western peoples won’t be scared off by the MSM from taking their countries back.