Europe’s Murdering Muslims: Trump And Tillerson HAVE THE POWER To Stop Them Coming Here IMMEDIATELY 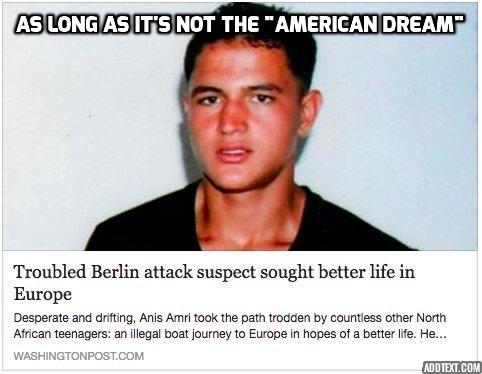 Three and a half days later, in the small hours of Friday morning, Amri was spotted by two cops in Milan, Italy. They accosted him; he shot and wounded one of the cops; the other cop then shot him dead.

Amri's immigration history is a case study of Western stupidity and incompetence. He was one of the early boat people leaving North Africa for the Italian island of Lampedusa in 2011. While there he was arrested for robbery, and arson—he helped set fire to a holding center for illegals. 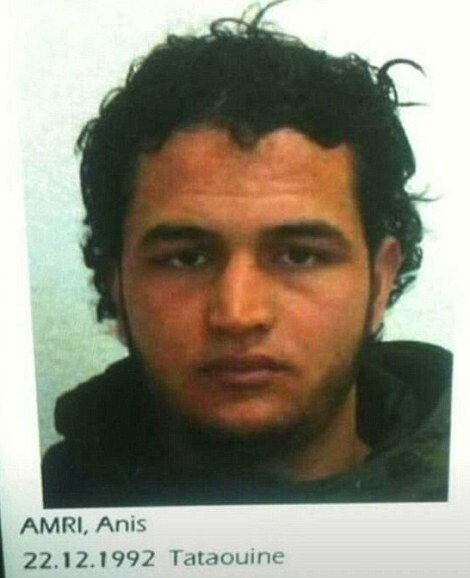 The Italians put him in jail for four years. In Italian prisons, as in British and French prisons, radical Muslims are a major organizing force among the prisoners, so Amri got radicalized.

So I guess that went something like: "Scusi, Mr. fanatical Muslim arsonist, would you mind leaving our country now, if it's no trouble?"

Amri did leave Italy. Taking advantage of Europe's wide-open internal borders, he went to Germany and applied for asylum. Another quote from the Beeb:

His application was rejected by the German authorities but they were unable to deport him to Tunisia because he had no valid identification papers.

That phrase "valid identification papers" deserves a roll of the eyes all by itself. In the first place, it's common knowledge that these illegals throw away their passports when leaving their home countries, precisely to make it difficult to deport them. In the few cases where illegals do have any papers, those papers were purchased for cash from some forgery shop in a Middle Eastern bazaar, and bear no necessary relation to the illegal's actual nationality and origins. There's no way for European governments to know where an illegal has come from, nor anything else about him. Britain recently cut a deal to take in child refugees from the illegals camp in Calais, Northern France. When the kiddies arrived, they turned out to be muscular six-foot guys with three-day growths of chin stubble. [Fury at ‘soft checks’ on child migrants: Adults pretending to be children say aid workers, By Giles Sheldrick, Express [UK] October 19, 2016]

So where are we with Anis Amri? His application for asylum in Germany was rejected in June, and he was ordered deported. So he was put on a plane back to Tunisia, right?

Of course not! In Euro-speak the phrase "ordered deported" means that some low-level state clerk gives you a sheet of paper saying that you have been ordered deported, then shows you the door—the door back out onto the street. That's all.

Mr. Amri, as it happens, was fed up with Germany. He decided to head for Switzerland. However, and here I'm going to switch sources and quote from the New York Times:

The police noted his deportation papers and detained him that weekend, but he was ordered released after 48 hours. His lack of Tunisian identity papers meant the German authorities could neither deport nor detain him.

You could hardly have a clearer illustration of the complete collapse of will on the part of Western Civilization to defend itself against foreign malefactors.

This really isn't rocket science. Sure, you can make a case for admitting some refugees from war zones into your country. But that should not include males of military age. There's a civil war in your country? Pick a side and get a weapon.

Female, infant, and aged refugees aside, keep out anyone not holding a valid visa issued by your government. Keep them out—don't let them across your borders.

If unwanted foreigners do arrive on your territory somehow, send them back where they came from ASAP.

If you can't find out where they came from, or if the place they came from won't take them, put them in camps and keep them there under strict guard, basic food and medical attention provided, no luxuries, cf. Israel.

Is it really beyond the abilities of European governments to institute such elementary measures for national self-preservation?

Yes, apparently it is. So people out doing their Christmas shopping—families, children—are crushed and mangled to death by a crazy Muslim illegal.

This is what civilizational suicide looks like in Europe. You'll be seeing a lot more of it.

And of course the U.S.A. is on the same path.

In Fiscal Year 2016, which ended September 30th, we took in 85,000 so-called "refugees," most from Syria, Afghanistan, Somalia and Iraq—countries that make Tunisia look like a suburb of Helsinki. ['Refugee' resettlement accelerates in Obama's final months, by Paul Bremmer, WND, December 20, 2016]

Eleven weeks into the new Fiscal Year, the day-to-day rate of intake is higher than at the corresponding time last year. Barack Obama has set a target of 110,000 for Fiscal 2017. Eighty thousand of those will be admitted after Donald Trump takes office. It's going to be a key indicator of Trump's willingness to take on the bogus "refugee" rackets whether or not he shuts down the flow as he has the power to do. [Record number of Somalis entering America as refugees, but where does Tillerson stand? , by Daniel Horowitz, Conservative Review, December 14, 2016]

A key player here: Trump's nominee for Secretary of State, Rex Tillerson. Most of the key decisions about refugee intake fall under the State Department's purview. If Tillerson lets us down on this, and Trump lets him let us down, we'll know the new Chief Executive is not serious about bringing sanity to U.S. immigration policy. 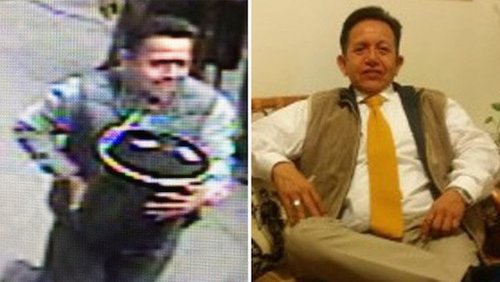 The parallels with Europe are plain to see. We actually do sometimes deport illegals; but since they just turn round and come right back in again, it's hard to see why we bother. The guy who stole 86 pounds of gold from out of the back of a truck in New York City three months ago has just been identified. He's an illegal from Ecuador who's been deported four times.

For decades, liberal Europe encouraged Muslim immigration and turned a blind eye to radical clerics and segregated "no go zones." I am afraid the same reality has happened in Minnesota. Entire neighborhoods in Minneapolis, such as Cedar Riverside, dominated by low-income public housing high rises, are almost entirely Somali. Integration and assimilation have not occurred the way we were told by charities and Somali activists. A permanent, aggrieved underclass of Muslims ripe for radicalization is now the reality in the heartland of America. The parallels to France and other nations in Europe is both real and concerning.[Minnesota: Yes to Immigration, No to Jihad]

That's not a voice from the Alt Right, either. If anything, Pence is an immigration romantic. His article actually includes the sentence: "We are a nation of immigrants."

He has eyes to see, though. What he sees in Minnesota is huge, permanent Islamic ghettos.

Which, again, is what you see in Europe. Last year British Prime Minister David Cameron ordered social welfare honcho Louise Casey to investigate and produce a report on the integration of minorities in Britain. That report was duly published three weeks ago. It's officially called The Casey Review. [PDF]

It's not an easy read, all couched in the prim, constipated diction of social science professionals. Ms. Casey—actually Dame Casey, to give her her proper title, "Dame" being the female equivalent of "Sir"—this Casey person comes across as considerably worried by what she found but, trapped as she is in the multiculti mindset, not sure why she should be worried. This gives the whole report a slightly baffled quality.

If you can't face all 200 pages of the thing, there's an 18-page executive summary on the internet. Just for a flavor, here's Point 44 from that summary:

Polling in 2015 … showed that more than 55 percent of the general public agreed that there was a fundamental clash between Islam and the values of British society, while 46 percent of British Muslims felt that being a Muslim in Britain was difficult due to prejudice against Islam. We found a growing sense of grievance among sections of the Muslim population, and a stronger sense of identification with the plight of the "Ummah," or global Muslim community.

Who would ever have guessed?

Article
Our Elites Claim Christmas Is "White Supremacy Culture At Work." Their Problem: The Music Is So Beautiful
MORE...
POPULAR TAGS