From: Scott [Email him]

On Saturday night in a mall in St. Cloud, MN, when a Somali  Muslim terrorist   stabbed ten  people, he was shot to death by an off-duty policeman. He shouted "Allah" and asked at least one victim if he was a Muslim before trying to murder him. ISIS is hailing the attack and martyr.

Imagine the carnage and number of victims, at least some of whom would have been killed and gravely wounded, if not for a man with a gun.

James Fulford writes; The guy who shot the Somali, saving a number of people from being stabbed, is a part-time police officer who is active in training private citizens to defend themselves with licensed firearms: he’s not just an “off-duty police officer”, he’s a full fledged member of the American “gun culture”.

USPSA Shooter,  3-Gunner, and NRA-certified firearms instructor Jason Falconer has been identified as the man who shot and killed a 22-year-old Somali immigrant who went on a stabbing rampage inside a St. Cloud, (MN) Mall on Saturday.

The apparent terrorist—who apparently asked victims if they were Muslims before stabbing them—was engaged by Falconer inside the mall.

Falconer is the president and owner of Tactical Advantage LLC, a shooting range and tactical training facility with a strong focus on arming concealed carriers. He’s also a former chief of the Albany (MN) police department, and he remains a part-time officer.

But Falconer has consistently been identified in the mainstream media only as as a “former police chief” and  “off-duty police officer.”

It’s almost as if the media is attempting to cover up the fact that creating and training armed citizens is a major part of the man who took out the terrorist in a MN mall this weekend. 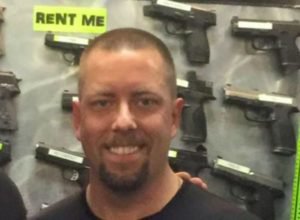 He’s a firearms instructor passionate about training concealed carriers and developing the best-possible, most-realistic training for his clients. He’s part of the reason why concealed carry continues to surge in popularity, with more than 14 million Americans now choosing to carry some or part of the time.

While Mr. Falconer happened to be the armed citizen who stopped the wannabe mass killer before he could take a life, it just as easily could have been one of his students.

It just as easily could have been one of you.