So it's an attempt to bomb a Christmas market, but not by an atheist. Not by a German, either:

BERLIN (AP) — German prosecutors are investigating a 12-year-old boy who allegedly attempted to set off a nail bomb at a Christmas market in the southern city of Ludwigshafen, officials said Friday.

The German-born son of Iraqi parents is alleged to have tried to set off the device at the Christmas market on Nov. 26, and again outside city hall on Dec. 5, Focus magazine reported, citing security sources.

In the second failed attempt, a passer-by spotted the backpack containing the device and reported it to authorities. Inside they found a glass jar packed with firecrackers with nails taped to it, Focus reported.

Police said it would have burned but would not have exploded.

Stephan Meyer, the parliamentary spokesman on security issues for Chancellor Angela Merkel's conservative bloc, confirmed the details of the report.

Merkel's spokesman, Steffen Seibert, said it was a "startling case to everyone, and I think the proper response is to investigate it thoroughly."

"This shows how quickly the radicalization of a young person, a child, can take place," he said.

The mayor of Ludwigshafen, Eva Lohse, said Friday the boy had been taken to a safe place and posed no threat to the public. 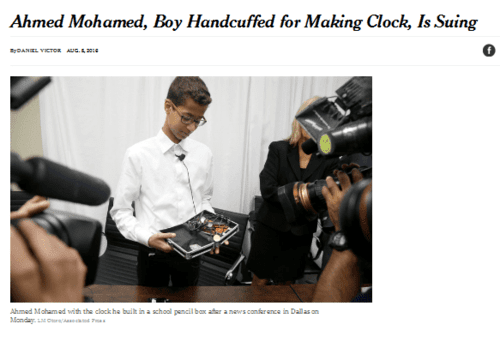 You need to get paragraph two to find out that he's an Iraqi, and paragraph eight to find out that this Christophobic act was committed by a Muslim. When they refer to him being taken to a "safe place" and posing "no threat to the public" I presume they mean he's in juvenile detention, or some kind of German "Child Services" facility.

If so, that would mean he's not in a "safe place" and does pose a "threat to the public"—those facilities are notoriously insecure. 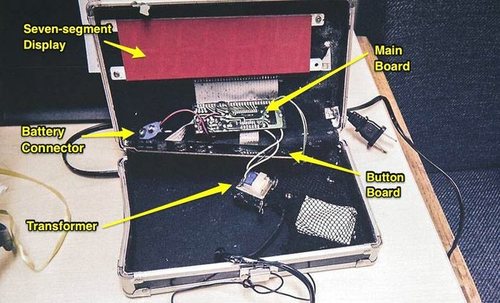 Since we don't have any photos of the 12-year old bomber, I've included photos of "Clock Boy" Ahmed Mohamed, and the mock-up of a briefcase bomb that he brought to a Texas school.