Lampedusa, the southernmost island outpost of Italy has been overwhelmed for months by thousands of North Africans, who are mostly young males who don’t want to fight for freedom in the celebrated Arab Spring. They are using the chaos to pose as refugees in order to enter Europe and avail themselves of its wealth and generous welfare system.

Over the last year, more than 48,000 illegal alien opportunists have at various times deposited themselves on Lampedusa, which covers less than 8 square miles and has the unlucky position of being only 70 miles from Tunisia.

Below, North Africans created a tent city of trash on the island of Lampedusa. 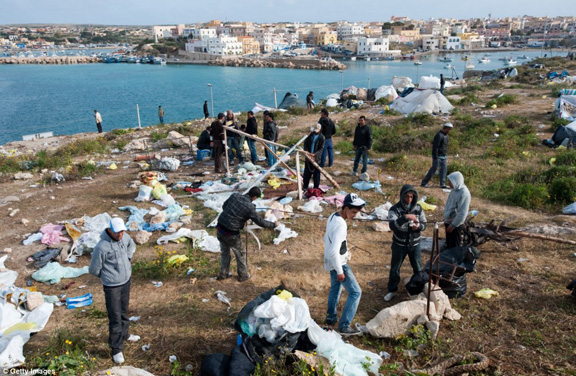 Tensions have accumulated on the island as the faux refugees have demanded better treatment from their unwilling hosts as well as entrance to the full refrigerator that Europe represents. When a recent batch of 1500 Muslim boaters were told that they would be repatriated, they burned down the immigration center and proceeded to riot. Perhaps they were trying to say that Italy’s immigration system is broken, or is insufficiently celebratory of diversity.

A Pew poll from January 2010 showed that Italians had among the highest “anti-immigrant” sentiments on earth, although Pew didn’t bother to specify illegal immigration. Whatever the specifics of public opinion, the images of hostile demanders of entry can’t be going over well in Italy.

The video below describes attacks by the North Africans against local people, and the mayor said he had armed himself with a baseball bat and was prepared to defend himself and the citizens. Too bad the mayor isn’t better equipped for self-defense.

Eleven people have been injured after refugees clashed with riot police on the Italian island of Lampedusa after hundreds of protesters burned the reception centre down.

The devastating fire started on Tuesday night when the Tunisian migrants, protesting against their immediate repatriation, allegedly set fire to their bed mattresses. The blaze reduced much of the controversial centre to a smoking ruin.

On Wednesday violence broke out between riot police and refugees on the island. Three Italian Carabinieri, a policeman and seven Tunisians have been injured.

The fire dealt a heavy blow to Italy’s ability to deal with a continuing flood of refugees from North Africa in the wake of the popular revolts in Tunisia and Egypt and the civil war in Libya.

More than 48,000 have reached the shores of southern Italy since the start of the year.

Many of the 1,200 migrants held in the centre fled when three fires broke out late on Tuesday.

As police stationed on the island rounded them up, the fires blazed out of control and destroyed three buildings in the complex.

The fires were allegedly lit deliberately by Tunisians protesting against their imminent return home, having been ruled to be economic migrants rather than bona fide asylum seekers.

Bernardino De Rubeis, the outspoken mayor of the island, said he had been warning the government in Rome for days that tensions among the migrants were increasing to breaking point.

“In the past few days I raised the alarm more than once. Enough is now enough,” he said, calling for Silvio Berlusconi, the prime minister, to call an emergency cabinet meeting to discuss the crisis.

He said islanders were fed up with having to host so many migrants. “We’re in a war, and the people will react. There are people here who want to go out into the streets armed with clubs.”

The mayor demanded that Italian navy ships be sent to the island “immediately” in order to transfer the migrants to camps in Sicily and the mainland.

He said police and paramilitary Carabinieri officers should have responded to the arson much more forcefully.

“We can’t understand why police and Carabinieri go in hard against fans in football fans – their own compatriots – while on Lampedusa it’s completely different. We need a strong hand on the island too. People are tired of all this, they want to get back to living in peace.”

The UN refugee agency, the UNHCR, has said that the rate of transferrals from the island needs to be speeded up in order to avoid overcrowding in the centre.

The agency is concerned about where future arrivals from North Africa will be accommodated. An envoy for the European Union in Tripoli said it will be a long time before war-torn Libya is able to control its borders.

This is the second time in just over two years that the reception centre has been torched. A large fire in February 2009 caused serious structural damage.