For any and all American patriots in Virginia and across the nation who plan to attend the pro-Second Amendment rally in Richmond on January 20, please consider this sage advice: DON’T! Virginia’s Leftist governor and his Main Stream Media enablers put a target on your back with an emergency order, a court ruling to back it up, and the latest go-to smear: “white nationalist.”  Don’t walk into another trap like the one the same Democrat-controlled state government set for the Unite The Right rally in Charlottesville in 2017.

If you want to know what you’re in for, or what these people think of you, consider NBC’s tweet that put gun-owners in the crosshairs of a full-bore attack from the hate-white Left: 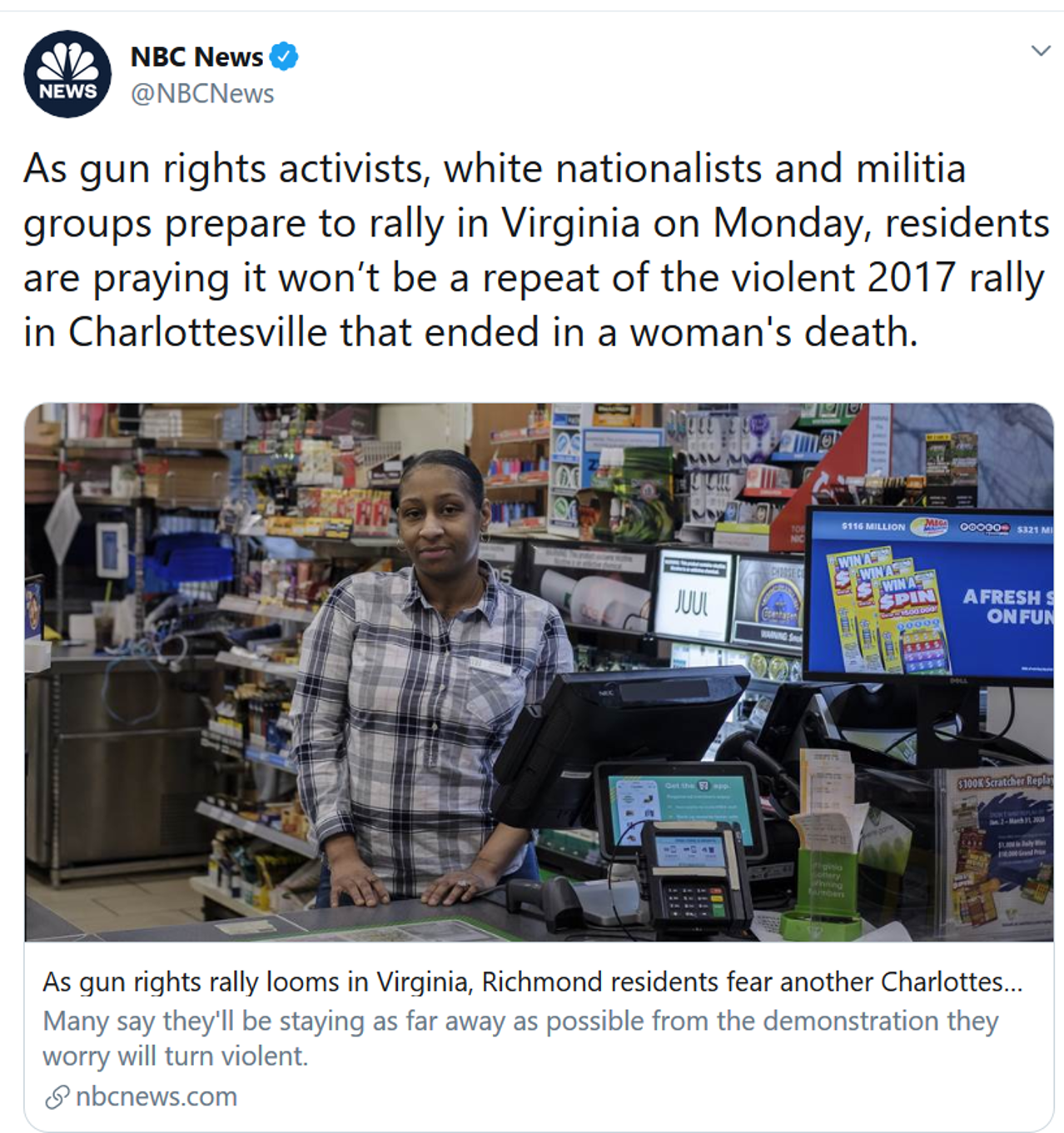 Also, see this now-deleted Tweet from NBC reporter Ben Collins, that simply calls it a “white nationalist rally” and implores reporters not to put out counter-Narrative facts that will make them heroes in “neo-Nazi propaganda circles”. 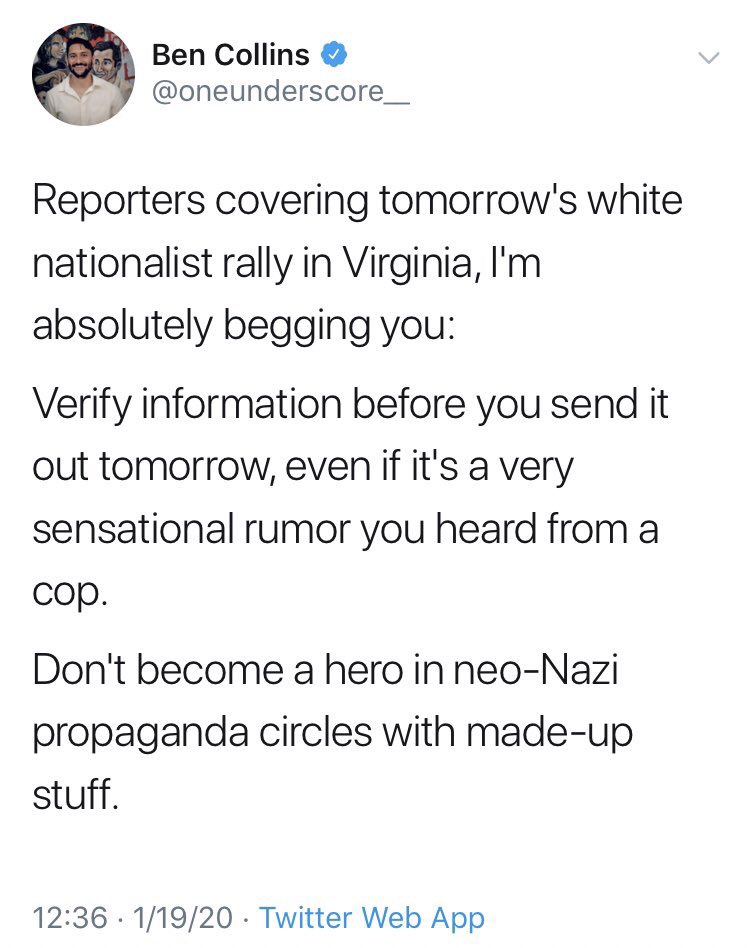 The Left has criminalized dissent from the Right. “Remember Charlottesville” is the new rallying cry for denying white Americans their rights to freely associate and assemble.

Consider the Virginia Supreme Court’s refusal to hear an appeal of a lower court ruling, which upheld an emergency order from Democrat Gov. Ralph “Black Face” Northam, who had banned guns for Second Amendment protestors at the state capitol.

Northam had banned guns on the Capitol grounds from Friday night through Tuesday, meaning those planning to gather for Monday's rally will not, unlike previous years, be allowed to carry firearms. The restriction may impact how many people attend the event and divert those who prefer not to be disarmed to other areas around Richmond.

Northam and his Leftist gang are just hoping something happens, which could make Charlottesville look like a schoolyard tussle and give the Democrat-controlled General Assembly the excuse it needs to press for even more Draconian gun controls.

The sudden equation of law-abiding white gun-owners with racists has a purpose: to help Northam dismantle gun rights. Thus in its piece about the rumor that Antifa goons might march for gun rights, Newsweek warned of Neo-Nazis [Antifa Deny They Are Marching With Neo-Nazis At Virginia Gun Rights Rally, by Khaleda Rahman, Newsweek, January 19, 2020]. The Associated Press tossed “white supremacists” into the mix [A look at expected participants in Virginia gun rally, by Sarah Rankin, AP, January 19, 2020].

As America First advocate Nicholas Fuentes tweeted, “I’ve got a very bad feeling about this gun rally in Virginia on Monday. Seems to me that it could easily turn out like Charlottesville, or possibly worse. On the one hand I obviously side with the 2A protesters but this could be a set up or turn violent (or both). Be careful!”

GOP Virginia Sen. Amanda Chase went further. She flatly stated that Northam set a trap. Her warning to patriots on her Facebook page is worth reprising in full:

I want you to be aware of how we are being set up.

Does the Patriot Act ring a bell?

Does the National Defense Authorization Act ring a bell?

If people show up wearing any kind of uniform, patch or other symbol on their clothing signifying they belong to a militia and something goes wrong, you could/will be held as a domestic terrorist.

If anyone steps out of line, all it takes is one person, it may even be a government plant. … if that plant does anything to disrupt the rally, you could/will be arrested as a domestic terrorist.

The Governor, using the media has already set the stage for this to happen.

He has already laid the groundwork to make the entire movement look like insurrection.

It will be used to put the rest of the nation on notice of what will happen to you, if you resist.

They have used the Southern Poverty Law Center over the last 15 years to lay the groundwork.

They have labeled us as potential domestic terrorist for a long time now.

Anyone who has ever related to the 3%er’s, a militia, or just belonged to any Patriot group…the groundwork has been laid to brand you as a domestic terrorist.

The outstanding webzine Conservative Treehouse agreed. Noting that anti-gun Democrat presidential candidate Michael Bloomberg “funded the majority of Virginia anti-gun legislators who are now proposing considerable restrictions on lawful gun ownership in the commonwealth,” the Treehouse warned that “provoking civil unrest to achieve political objectives is a well-known strategy of the Alinsky wing of the apparatus,” and “it’s usually in hindsight when the AstroTurf originating the crisis is identified.” [Beware Virginia – A Remarkable Confluence of Events…, January 18, 2020].

The good news, quite apart from the planned rally: Virginians who still wish to live in the Commonwealth of Lee and Jackson, or what remains of it, have said they won’t let Northam and the radical Left disarm them.

More than 90 percent of the counties in Virginia, including some like Prince William that went for Northam in 2017 and Hillary Clinton the year before, have declared themselves “Second Amendment Sanctuaries.” The patriots who pushed local boards and councils to pass those sanctuary statutes will likely be in Richmond on Monday.

The growth of government and the importation of Leftist government bureaucrats is usually the reason cited for Northern Virginia becoming solid blue.

But more recently the MSM has decided it’s safe to acknowledge that Northam’s victory in 2017 and the debacle in 2019 that upended GOP control of the General Assembly was also propelled by mass non-white immigration to Northern Virginia, Hampton Roads, and Richmond and suburbs, where non-white immigrants voted for Democrats because of their plans to enact gun control. As the New York Times gloated:

“Guns, that is the most pressing issue for me,” said Vijay Katkuri, 38, a software engineer from southern India, explaining why he voted for a Democratic challenger in Tuesday’s elections. He was shopping for chicken at the Indian Spice Food Market. “There are lots of other issues, but you can only fix them if you are alive.”

Mr. Katkuri’s vote — the first of his life — helped flip a longtime Republican State Senate district and deliver the Virginia statehouse to the Democratic Party for the first time in a generation… But while political leaders come and go, the deeper, more lasting force at work is demographics.

Once the heart of the confederacy, Virginia is now the land of Indian grocery stores, Korean churches and Diwali festivals. The state population has boomed — up by 38 percent since 1990, with the biggest growth in densely settled suburban areas like South Riding. One in 10 people eligible to vote in the state were born outside the United States, up from one in 28 in 1990. It is also significantly less white. In 1990, the census tracts that make up Mr. Katkuri’s Senate district were home to about 35,000 people — 91 percent of them white. Today, its population of 225,000 is just 64 percent white.

Somewhat ironically, Fairfax, home of the National Rifle Association (which seems to be sitting tomorrow’s rally out), is ground-zero for the racial change that flipped the state. In 1990, the county’s population of 818,000 was 81.3 percent white. Last year, that figure had dropped to just 61 percent. A county that voted overwhelmingly for Republicans now votes overwhelmingly for Democrats.

It’s vital to note that the GOP didn’t help its cause last year by leaving 33 General Assembly races uncontested (10 House, 23 Senate).[ 2019 Virginia General Election Results, NYT, November 14, 2019,] Remember, the Democrats control the House and Senate only by 2 and 11 votes respectively.

But the extraordinary phenomenon of Virginia’s Second Amendment Sanctuary counties shows that Americans can be mobilized.

My message to Virginians: don’t demonstrate. Stay home, clean your guns and prepare to vote—for gun rights and against immigration.

Jack Dalton [Email him] is a recovering conservative in The South.