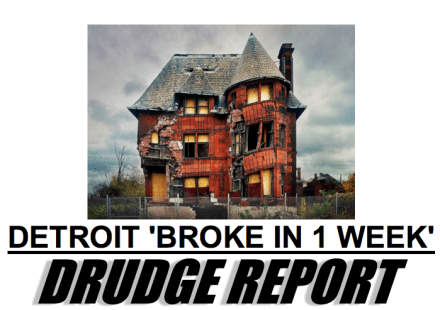 Robert Putnam, The Detroit Corollary, And The Slamming-Shut Of The American Mind

The Drudge Report, with its dramatic (if dogwhistling) news judgment, splashed this on Friday: Detroit will run out of cash a week from today if a lawsuit challenging the validity of the city's consent agreement with the state is not withdrawn, city officials said this morning.

Jack Martin, the city’s new chief financial officer, said the city will be broke by June 15 but should be able to make payroll for its employees. He said the city will be operating in a deficit situation if the state withholds payments on a portion of the $80 million in bond money needed to help keep the city afloat.

The battle ultimately could lead to an emergency manager if state officials deem the city to be in violation of the consent agreement that gives the state significant control over Detroit’s finances.

(The moral—wait for it!—“Detroit is evidence for the fact that the economic limitations on tax increases sometimes kick in before the political limitations do.”)

Eighteen years after The Bell Curve laid out the new scientific consensus on the relationships between race, IQ and social pathology—and was the subject of a National Review cover story!—American public debate has actually gone backwards.

I believe my book Escape from Detroit:The Collapse of America's Black Metropolis is currently the only frank discussion of the role of demography in the Detroit disaster. Williamson, for example, doesn’t mention race at all.

Ironically, but perhaps not surprisingly, the post-purge National Review has been complicit in this slamming-shut of the American Mind.

After Hurricane Katrina in 2005, as the water flooding much of New Orleans receded back into Lake Pontchartrain, Steve Sailer published Racial Reality and the New Orleans Nightmare, which, pre-Facebook, long held the record for the most emailed-out VDARE.com story ever. Obviously many readers nodded along in silent agreement when they came upon this line:

"What you won’t hear, except from me, is that 'Let the good times roll' is an especially risky message for African-Americans. The plain fact is that they tend to possess poorer native judgment than members of better-educated groups. Thus they need stricter moral guidance from society"

"The most disgusting sentence yet written about Katrina."

Podhoretz, now the Editor of Commentary, is no doubt too busy agitating for more war in the Middle East to notice this year’s House Bill 758 in Louisiana, which would give the governor emergency powers to call out National Guard troops when “urban” murder rates in the state soar. [Bill gives governor power to call out National Guard when murders spike, By Ed Anderson, The Times-Picayune, March 2, 2012

But let me end on a note of scholarship. Isn’t it strange that in a near-homogeneous Black community like Detroit, there seems to be so little social trust and social capital? Doesn’t this fly in the face of Harvard political scientist Robert Putnam’s famous study that found diversity was the primary cause for a loss of civic engagement.

Remember the story? Putnam was so embarrassed by his study and investigation that showed the harmful effects of diversity that he suppressed the findings for a number of years.

But in Detroit, the inverse of Putnam’s findings appear to be true. The blacker a community, the fewer people vote, the less they volunteer, the less civility and social trust and the less they work to better the community.

They don’t even snitch to the police! Neighborhood trust appears to be catastrophically low, especially in the 48205 zip code, the most violent in America.

We’ll call it the Detroit Corollary.