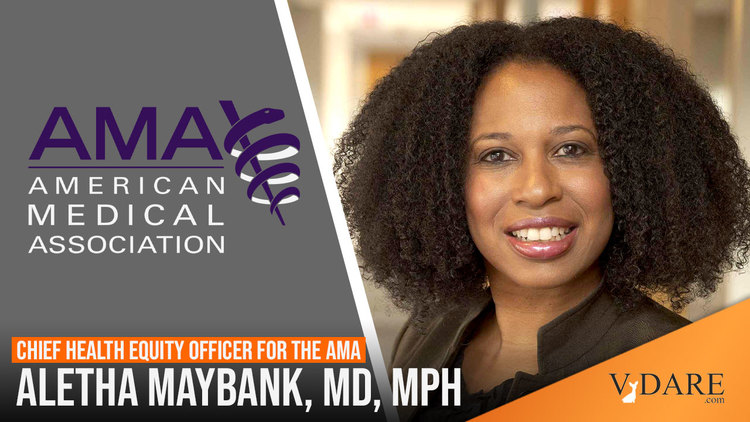 Dangerous To Your Health: “Antiracism” Infects The American Medical Association

The hardest part of writing about the “Equity” racket is reading the illiterate drivel that its scribes churn out. In this case, though, the effort may be just barely worth it. Your health is at stake, at least to the extent that the medical profession has any effect on it.

I think during this time of COVID, we were prepared and ready to be able to respond in many different ways as it related to equity and respond to the advocacy space, respond to programmatic space, respond to issues related to data in a way that we may not have been before. All of the context of this year just really offers a tremendous need and opportunity for us to push medicine, I think, in the way that we are with this plan.

This is just the latest symptom of the disease that has quietly infected the AMA. The organization that once (unsuccessfully) opposed Medicare [Reflections on the enactment of Medicare and Medicaid, by Wilbur J. Cohen, Health Care Financ Rev., December 1985] is no more. On every major political issue, the American Medical Association is at one with the Democrat Party, even signing on to Obamacare[AMA letter to Congressional leaders on reform of health care system, January 3, 2017].

The familiar, weary litany—gun control, Open Borders, racism as a “threat to public health,” equity and social justice in medicine—is now the mission of the largest medical lobby in the country.

Diversity? Oh, yes! The AMA is “committed to a diverse physician workforce” and has been promoting racial preferences in admissions for years. As the AMA claimed in an amicus brief in Fisher v. University of Texas at Austin, a 2016 decision by the U.S. Supreme Court that further upheld this practice:

Removing the ability of medical schools to consider applicants’ race and ethnicity as one of many personal attributes would undermine their ability to assess the entirety of each individual’s background, thus frustrating the goal of best serving the public’s health [Why the AMA is committed to a diverse physician workforce, by Barbara L. McAneny, MD Former President, AMA Association, April 24, 2019]

Why is race more important than other qualifications? The experts at the AMA have the answer:

Fortunately, multiple studies have demonstrated that patients who share racial or gender characteristics with the physicians treating them demonstrate higher rates of both treatment compliance and personal satisfaction. [Emphasis added]

Note that subjective patient satisfaction and reported treatment compliance are the measures of success, rather than objective clinical outcomes, which are harder to quantify quickly and, you know, a white thing [In Smithsonian Race Guidelines, Rational Thinking and Hard Work Are White Values, by Marina Watts, Newsweek, July 17, 2020].

It might be comforting to consider that only about 15% of practicing physicians belong to the AMA. And even that figure is inflated by free memberships for medical students, who haven’t yet figured out that Big Woke Med doesn’t really represent their interests. The declining fortunes of the organization are a perennial saga[Why Physicians Won't Unite to 'Rescue' Medicine, by Leigh Page, Medscape.com, September 04, 2014].

How unpopular is the AMA with the medical profession? It’s so unpopular that its membership solicitations come in unmarked brown envelopes so that recipients won’t throw them away unopened. (I know because I get lots of them).

Such a low level of support for the AMA might be reassuring if this were a world in which the survival of institutions correlated with good work, or if the Wokeness of the AMA were an anomaly.

Alas, such is not the case. At least 20% of the AMA’s $300 million annual budget comes from the sale of its “’Masterfile’” of doctor profiles, spanning everything from detailed biographic information to an individual doctor’s prescription-writing history” to drug companies, which use the information to push expensive patent medicines [A Symbiotic Relationship — The AMA And The For-Profit Health Lobby, by Lee Fang, ThinkProgress, June 11, 2009].A larger portion comes from royalties on the copyrighted Current Procedural Terminology [CPT] codes. The AMA’s membership dues contributing only 12% of revenue, but it can carry on as a fat and happy rent-seeking bastion of the managerial class even if doctors despise it.

But the larger story is that Woke medical bureaucrats are not unique to the AMA. They are on the boards and faculties of every medical school. The University of Maryland boasts a “Culture Transformation Initiative” based on addressing Unconscious Bias through something called a Diversity Dashboard, Gender Equity/Promotions, and Mandatory Training. (The higher-ups at that school are so zealous about equality that they recently tried to remove the sex of patients from the medical record. An actual practicing physician had to explain how the absence of such information could lead to medical errors.)

Duke University Medical School believes that “diversity and inclusion are key drivers of institutional excellence that can accelerate our ability to innovate and solve complex problems” and claims to have “one of the most diverse classes of students of any medical school in the country.”

Johns Hopkins is a bit behind the times, listing “Diversity and Inclusion” in third place among its “core values,” after “Excellence and Discovery” and “Leadership and Integrity” but ahead of “Respect and Collegiality.”

Apparently, Dr. Maybank [Tweet her] needs to have a talk with them.

Observe the construct: We Believe. Whether this confession of faith is sincere or opportunistic, it is the one acceptable religion, and woe unto the infidel!

It would be a miracle if the AMA dissented.

In fact, Howard Bauchner, the editor-in-chief of JAMA (Journal of the American Medical Association), is stepping down from his post with a cringe and a grovel following a 16-minute AMA podcast in which the host, JAMA deputy editor Ed Livingston, MD, incautiously remarked that he “didn’t understand the concept” of “structural racism,”inasmuch as racism has been illegal since the 1960s.

"I remain profoundly disappointed in myself for the lapses that led to the publishing of the tweet and podcast. Although I did not write or even see the tweet, or create the podcast, as editor in chief, I am ultimately responsible for them," Bauchner said in a statement. "I share and have always supported the AMA's commitment to dismantling structural racism in the institutions of American medicine, as evident by numerous publications in JAMA on this issue and related subjects, and look forward to personally contributing to that work going forward. To advance equity in medicine, my contributions will be best accomplished in other venues."

Naturally, deputy JAMA editor Livingston also resigned in contrition on May 10. The temple of Antiracism is a church without forgiveness.

(1) Stay away from the medical profession as much as possible.

(2) If you must seek treatment, do so before the older generation of doctors retires.

Dr. Cockey [Email him] is a retired diagnostic radiologist. His most recent novel The Sacred Fury is set in a dystopian future in Baltimore, which is looking more and more like the present,