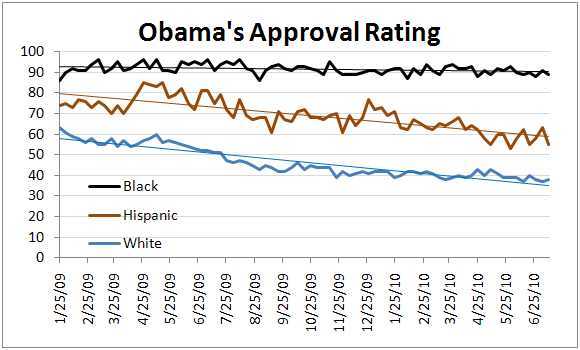 President Barack Obama was marketed to America as the magic cure for its racial divisions. But in my book America's Half-Blood Prince Barack Obama's "Story Of Race And Inheritance", based on a close study of Obama's own much-purchased, little-read autobiography Dreams from My Father: A Story of Race and Inheritance, I argued that Obama was in fact fundamentally motivated by race and that some people, probably his credulous white supporters, were in for a big surprise.

This is exactly what has happened. Obama has proved racially divisive both for implicit and explicit reasons. Eighteen months into his Presidency, the races are farther apart in their views of him than when he came to office.

Here are Obama's Gallup Poll approval ratings every week since his Inauguration: 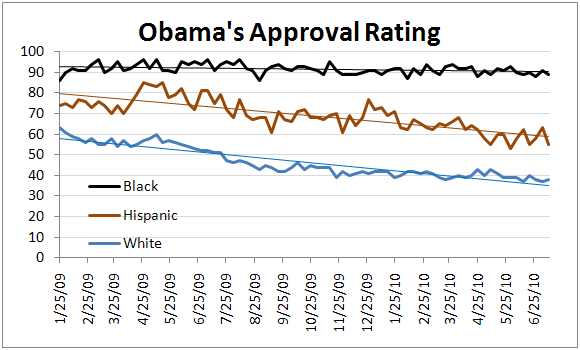 Black support for the black President remains almost rock solid, standing at 89 percent through the week ending July 11, 2010—slightly higher than in his first week in office.

It's important to note that the white approval rating was as high as 60 percent as late as the week of May 10, 2009. The subsequent sharp fall-off is usually blamed on the economy.

But an alternative explanation is that white disenchantment with Obama appears to have set in during the warm weather months of 2009—about the time of Obama's nomination of Sonia Sotomayor to the Supreme Court (May 26, 2009); the Supreme Court's rebuke of Sotomayor's ruling in the Ricci case (June 29, 2009); and the ludicrous damage-controlling "Beer Summit" featuring Professor Henry Louis Gates and an Obama-dissed Cambridge, MA police officer, James Crowley (July 22-30, 2009).

Since the end of summer 2009, Obama's staffers, such as the cynical Chicagoan Rahm Emanuel, have worked diligently to keep their boss from alarming whites with obvious racial gaffes—as when he responded frankly to the Henry Louis Gates question at one of his rare press conferences. Obama's rating among whites has continued to trickle downward, but at a less catastrophic rate.

On the other hand, his staff's perceived need to prevent "Obama from being Obama" has likely contributed to Obama's current guarded, depressive affect.

For a man proclaimed an inspirational political genius in 2008, he strikes many people in 2010 as a downer, a bit of a buzzkill.

And Obama's allies continue to provoke racial squabbles. For example, the NAACP is trying to "concern troll" [=undermine]the Tea Party movement into dropping all that stuff about endless deficits and conduct purges of purported racists in its ranks. And the public is just waking up to the fact that Congresswoman Maxine Waters has larded the new financial reform bill with racial quotas.

Hispanics' feelings toward Obama lie in between those of blacks and whites, as is so common in American racial patterns. The President's Hispanic ratings have fallen roughly in parallel with white opinion, with the big drop starting a little later in 2009. This also follows a long tradition: Hispanic voters generally follow changes in white opinion, just more erratically, and stay significantly to the left of whites for perfectly understandable reasons of self-interest: they are much more enthusiastic about racial / ethnic preferences and tax-and-spend policies from which they hope to benefit at white expense.

Over the last decade, the Main Stream Media has carried countless credulous articles about the Hispanic vote. Most are based on self-serving talking points fed to journalists by so-called Hispanic leaders.

But there is a dirty little secret in all this: Hispanic voters seldom pay much attention to whatever the press proclaims to be their burning issues, such as Sotomayor or Arizona's SB1070.

For example, Hispanic warmth toward Obama hit its peak (85 percent) a few weeks before he nominated Sonia Sotomayor on May 26, 2009. By August, he was down in the 60s with Hispanics.

One high school teacher told me that, throughout June 2009, he repeatedly brought up the Puerto Rican judge's name to inspire his mostly Mexican-American classes. One youth responded that he'd heard she was Cuban. But the rest never had any idea (even an incorrect one) about who she was or why anybody would think they'd care about her.

Similarly, in the weeks before Obama went to war against the citizens of Arizona in late April 2010 over SB1070, his Hispanic approval rating had been in the 60s. Now, it's at 55.

The decline of the Los Angeles Times would be a sad reminder of this—it has long tried to compete with the New York Times for the title of the Most Serious Newspaper in the country, but its circulation area has become increasingly Hispanic—if the paperhadn't been such an enthusiastic backer of the cause of its own destruction.

The conventional wisdom that says that the GOP must submit to the rising tide of Latinos. I have repeatedly argued that this is simply overblown. Despite their numbers, Hispanics are not the most formidable challenge any political party has ever confronted. They don't have terribly charismatic leaders, they don't have a determined and focused rank and file, and they don't have much of a claim on the conscience of America. Their main political advantage so far has been that they've bored whites and blacks into inattention regarding illegal immigration.

In contrast to Hispanics, however, black opinion tends to swing (to the extent that this rather monolithic bloc swings at all) in the opposite direction to white opinion. For example, Ronald Reagan increased his share of the white vote from 56 percent in 1980 to 64 percent in 1984. But his share of the black vote dropped from 11 percent to 9 percent.

This tendency for Hispanics to follow broad white political trends (while remaining consistently to the left of whites) has shown up throughout the history of exit polling. Journalists always label Hispanics a crucial "swing vote". But in fact they are more of a "flow vote" that fluctuates with the overall tide.

There may be an even dirtier secret reason for this behavior: Hispanics don't particularly like blacks. In fact, nobody likes blacks as much as whites do. Everybody else around the world has certain prejudices against blacks—and they don't feel terribly guilty about having them, either. Hispanics, for example, come from cultures in which people of 100 percent African descent are at the bottom of the social ladder, and everybody else tries to be perceived as whiter, or marry somebody whiter. Even a race warrior like President Hugo Chavez of Venezuela traded in his dark-skinned first wife for an Eastern European-looking blonde.

So the "Rainbow Coalition" may not be as formidable as its advocates imagine.

Nevertheless, the Obama Administration's first two years make it even more unmistakable than ever that American politics are Balkanizing racially.

"… I am uncomfortable with the idea of the two major parties splitting into racial blocs.

"But there's a simple solution. If you don't want whites to act like a minority group—e.g. racially-conscious, bloc-voting, biased, prickly, led by racial racketeers constantly proclaiming their group's victimization—then the government should stop making whites a minority through mass immigration."

Needless to say, the Bush Administration ignored my advice and pursued the opposite policy. And probably that is still the GOP Establishment's instinct, given the rumors that it intends to respond to the surging immigration issue, not by supporting a moratorium, but by urging a guest worker program.

What does the rest of Obama's term hold for his party—and America?

Recently, the pragmatic domestic policy influence on Obama of Chief of Staff Rahm Emanuel, a ferocious competitor dedicated to winning victories today, seems to be waning. It's not that Emanuel wouldn't mind putting millions of illegal immigrants on the path to voting Democratic, it's just that he can't see how to get away with it over the next few years.

Yet, the lawsuit against Arizona filed by Obama's Attorney General Eric Holder, a descendant of the mulatto elite of Barbados, represents the ascendancy of the Elect-a-New-People-to-Rule-the-Future side of Obama's otherwise cautious personality.

"Back in 2007, when Rahm Emanuel was in charge of electing Democrats to the House, he famously marveled at how immigration reform had overtaken Social Security as 'the third rail of American politics.' … Instead, western Democrats—egged on by rather large swaths of their moderate white base—are growing increasingly nervous at the Administration's twin push on immigration …"

The article quotes a "senior Democratic aide" as saying "The White House's infatuation with immigration reform is a lose-lose proposal for Democrats this election year."

I wonder if that "senior Democratic aide's" initials are R.E.? Will we be seeing President Obama announcing that his Chief of Staff has decided to move on to spend more time with his family?

In part, the Obama-Holder strategy of attacking Arizona and pushing amnesty is based on old-fashioned Karl Rovian delusions about the Hispanic vote. Greg Sargent noted in the Washington Post:

"Obama's immigration speech was partly driven by serious White House concern about the impact of softening Latino support for the president in major swing states like Nevada, Colorado and Florida."

In other words, Obama realizes no more than George W. Bush did that he's being lied to by self-interested Hispanic politicians and consultants about the size and motivations of the Hispanic vote. They are all prisoners of "the dominant interpretation of reality." The repeated failures of its predictions simply mean that its nostrums have not been tried hard enough yet.

Obama has lived almost his entire life in a bubble of entitlement and theory divorced from reality. My prediction: he will get an even bigger wake-up call than we've seen to date.