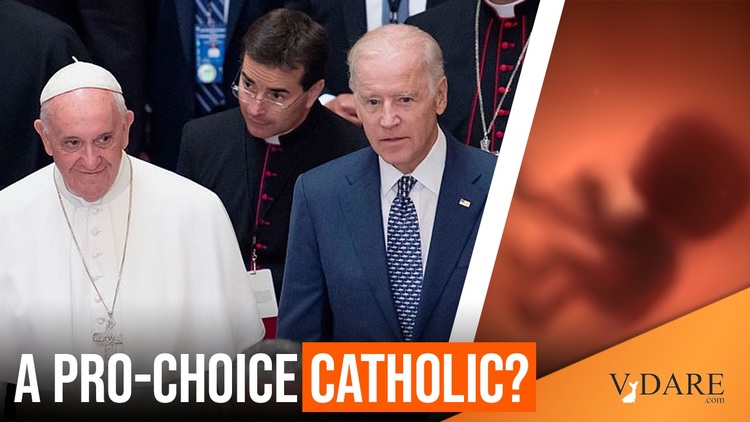 As a cradle Catholic and recipient of Notre Dame's Laetare Medal, Joe Biden is outspoken in declaring that the principles and beliefs of his Catholic faith guide his public  life.

"Joe is a man of faith," was a recurring theme at the Democratic convention that nominated him to become our second Catholic president.

Biden has often affirmed the centrality of his faith to his decisions in public life. In a video released on the eve of the convention, he credited Pope Francis and the nuns who educated him with making him the man he is today.

Yet, when the Supreme Court ruled in July that the Little Sisters of the Poor could not be forced, by an Obamacare mandate, to provide contraceptives to employees, Biden called the decision "disappointing."

For Joe has evolved over a half-century. He is now an all-in Roe v. Wade Catholic who supports a woman's right to abortion and believes the tax dollars of his fellow Catholics should pay for the abortions of women who cannot afford them.

This year, he changed his position and came out against the Hyde Amendment, which prohibits the use of tax dollars to pay for abortions.

What triggered Joe's renunciation of his past support for the Hyde Amendment? Primary opponents Elizabeth Warren and Kamala Harris had battered him for it and Bernie Sanders had given Biden some tutoring in the new moral law of the Democratic Party.

Said the Vermont socialist, "There is no middle ground on women's rights." With that cuffing, Biden scurried off the middle ground and was all in.

"Circumstances have changed," is how Biden explained his flip-flop.

Biden's moral journey from right-to-life to pro-abortion Democrat has not gone unnoticed within the Church. A dozen years ago, when Biden was still a senator, a bishop in Scranton, with Joe in mind, declared:

"I will not tolerate any politician who claims to be a faithful Catholic who is not genuinely pro-life. ... No Catholic politician who supports the culture of death should approach Holy Communion."

During the South Carolina primary, Fr. Robert Morey of Florence denied Biden communion on the grounds he had excommunicated himself by taking the stand he has taken on the killing of the unborn.

"Holy Communion signifies we are one with God, each other, and the Church," said Morey. "Any public figure who advocates for abortion places himself or herself out of Church teaching."

Biden also supports the restoration of federal funds for Planned Parenthood, a provider of abortions. Nor is life the only issue on which Biden has taken his leave of the teachings of the Church in which he was raised.

In 1994, Biden voted to cut off federal funds to schools that teach an acceptance of homosexuality. In 1996, he voted for the Defense of Marriage Act.

Once he had become vice president in 2012, however, Biden even got out ahead of Barack Obama in urging that homosexual unions be granted the legal and social standing of traditional marriage.

Had moral truth changed? Did Catholic teaching change? No, Biden changed. The Catechism of the Catholic Church still declares "homosexual acts" to be "intrinsically immoral and contrary to the natural law" and describes "homosexual tendencies" as "objectively disordered."

Biden once believed this, or said he did for most of his life, for that is the way he campaigned in Delaware and voted in D.C.

What has changed is the Democratic Party Biden now heads. The precepts of LGBT now dictate "moral truth" in the party and platform of Joe Biden, who now calls transgender rights "the civil rights issue of our time."

As Biden has turned his back on the teachings of the Church in which he was raised, the Church itself is coming under physical attack by the same radicals besetting civil society.

In Miami, a statue of Christ the Good Shepherd was lately beheaded. A statue of the Blessed Virgin inside a Boston church was set on fire, and another was desecrated in Tennessee. In Denver, the same headless fate befell a statue of St. Jude.

Statues of Fr. Junipero Serra, the priest who founded 17 missions from San Diego north to San Francisco, when California was under Spanish rule, have been under constant attack.

In St. Louis, a mounted statue in the city's Forest Park of the 13th century Saint and King Louis IX, the French monarch for whom the city was named, who led the Sixth and Seventh Crusades, is under siege.

Radicals are even demanding that the city's name be changed.

On right-to-life, the declared position of the U.S. Conference of Catholic Bishops is clear: "Taxpayer dollars should never fund abortion."

This unequivocal moral stance is being publicly repudiated and will be rejected, should he win the presidency on Nov. 3, by the professed believing and practicing Catholic, Joe Biden.