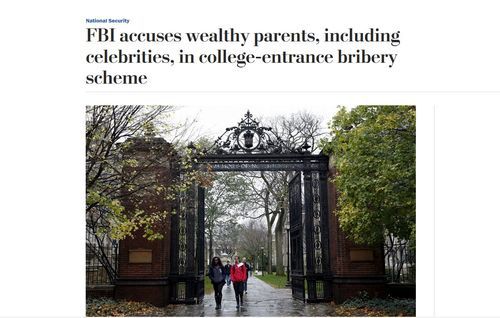 The Justice Department on Tuesday charged more than 30 people — including two television stars — with being part of a long-running scheme to bribe and cheat to get their kids into big-name colleges and universities.

In a later article, Sailer recounted this conversation:

Last week, I heard from one tiger mom who attributed her daughter's success in getting accepted by famous colleges to the $1,500 she paid a consultant to more or less write her daughter's essay about the Real Me.

But, $1,500 is nothing compared to what I heard last spring from a Harvard man with some old money who wants his son to follow in his footsteps:

Him: I made some calls. I found out the Harvard Number.

Me: What's "the Harvard Number?"

Him: It's how much you have to donate to Harvard to get your kid off the waiting list and into Harvard.

Me: You can do that?

Him: Yeah, but it costs five million,

Me: Five million dollars? Who can pay five million?

Him: Hedge fund guys. They ruin things for everybody.

And in Jared Kushner, Birdbrain Of Alcatraz, Ann Coulter said that Trump son-in-law Jared Kushner was pushing "sentencing reform" because he wanted something on his Wikipedia page besides "Got into Harvard because his felon father gave the college millions of dollars."
See

The Story Behind Jared Kushner’s Curious Acceptance Into Harvard, by Daniel Golden,  November 18, 2016.