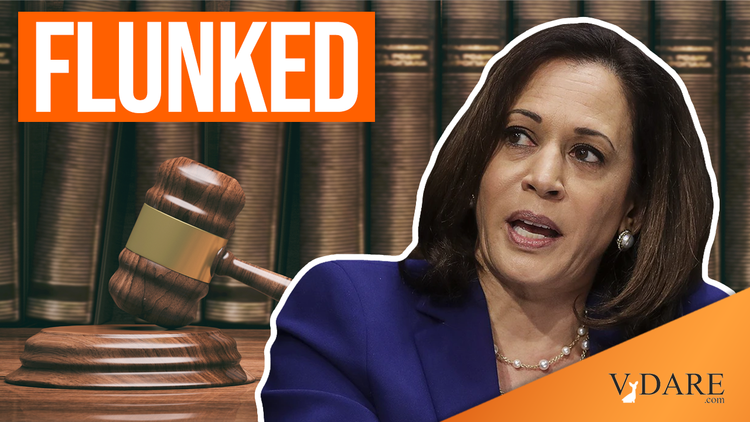 Re: Steve Sailer's blog post How Smart Is Kamala Harris?

Harris flunked the California State Bar exam in 1989, when the pass rate was nearly 60 percent [California’s Bar Exam Passage Rate Reaches 32-Year Low, by Staci Zaretsky, Above The Law,  November  21, 2016]. (She passed on her second try.) We’ll probably never know where in the ranking of losers her failing score put her, but in politics a 40/60 spread would mean she lost by a landslide.

That Harris chose UC Hastings College of Law, now ranked #59 in the nation, and Howard University, which sits at #104, means her earlier academic achievements and test scores were mediocre at best. By contrast, her parents—India-born Shyamala Gopalan and Jamaica-born Donald J. Harris, in the US on foreign-student visas—both earned PhDs at the then well respected UC Berkeley. But the dirty little secret mainstream media won’t report is that foreigners like her parents who qualified as racial minorities (aka People of Color) in the 1960s and ‘70s often displaced home-grown African-Americans so that universities could technically comply with affirmative-action policies then in place while denying entry to those Americans whom those policies were supposed to help.

When Harvard professors Henry Louis Gates and Lani Guinier pointed out in 2004 that Harvard’s affirmative action system especially privileged people with some claim to be black but less claim to be descendants of American slaves, they soon had to shut up because of the rise that summer of Obama, a hilariously perfect example of their thesis.

Lani Guinier, the light-skinned child of a Jamaican Communist immigrant, is herself an example of what she was talking about. Henry Louis Gates, on the other hand, is the son of a West Virginia millworker. Apparently the Democrats feel that being "first black president" or "first black female vice president" is a job regular American blacks won't do.