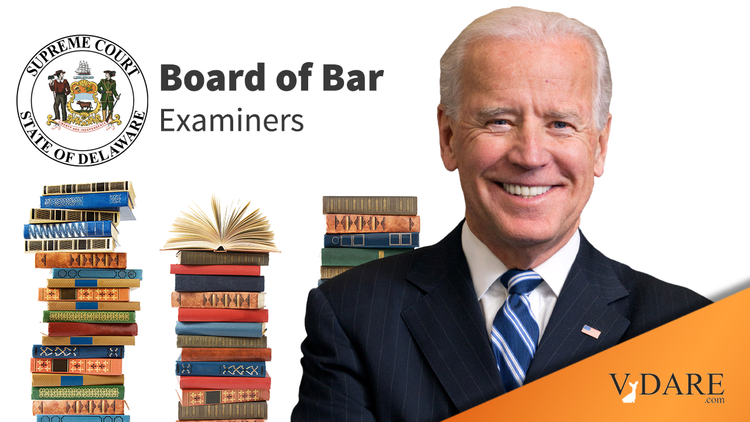 It took Kamala Harris two tries to pass the relatively difficult California bar exam, but what about her boss Joe Biden?

His home state of Delaware has been a heavy hitter in corporate law since the early 20th Century. At that time, most corporations in the U.S. were incorporated in New Jersey, which was conveniently close to the business capital of New York City. But then Gov. Woodrow Wilson raised taxes on corporations, so Delaware swooped in and offered the same convenience as NJ, but with lower fees and taxes.

But how to keep other states from doing to Delaware what it did to New Jersey? Delaware therefore invested in building an excellent court system for adjudicating questions of corporate law, with an emphasis on the smartest Delaware lawyers becoming judges. America’s corporations expect that Delaware judges will offer solid, non-erratic judgments that are unlikely to be overturned by federal courts.

To be a corporate lawyer in Wilmington, Delaware is a nice gig: You play in the national big leagues, and get paid like it, but you don’t have to deal with the expenses and stresses of New York.

What does all this have to do with Joe Biden? Not too much: Joe says that corporate law didn’t appeal to him (although it’s also true to say that Biden, who graduated near the bottom of his class at middling Syracuse law school and had almost been expelled as a first-year student for plagiarizing five pages of a paper, didn’t appeal to the august corporate law firms of Delaware).

But one downstream effect of Delaware taking law seriously is that its bar exam is usually one of the hardest to pass in the country. At present, it requires the highest score to pass, with California second.

Did Joe pass the bar on his first try?

The way to tell is by comparing when a celebrity graduated from law school and when he or she was “called to the bar.” For example, Barack Obama graduated from Harvard Law School in May or June 1991 and was admitted to the Illinois bar on December 17, 1991, suggesting he passed the not too tough Illinois bar exam on his first crack at it in the summer of 1991.

In contrast, Michelle Obama graduated from Harvard Law School in 1988 and was admitted to the bar on May 12, 1989, suggesting she did not pass the Illinois bar exam at her first chance, but did at her second.

Biden graduated from Syracuse Law School in June 1968. Sources conflict on when he was admitted to the Delaware bar: 1969 in some, but the most authoritative says he was “admitted to the bar December 1968” in Wilmington, DE.

At present, Delaware only offers the bar exam once per year, in late July.

Therefore, my bet would be that Joe passed the tough Delaware bar exam in July 1968 on his one and only try.

This is not a spectacular accomplishment: The majority of first-time takers pass Delaware’s test.

Still, it’s pretty good achievement. Joe is perhaps the second most vain man in American politics, after only his opponent in this race, so I’m sure he feels pretty good about himself over this.

Here are some other famous politicians and their experiences with the bar exam: