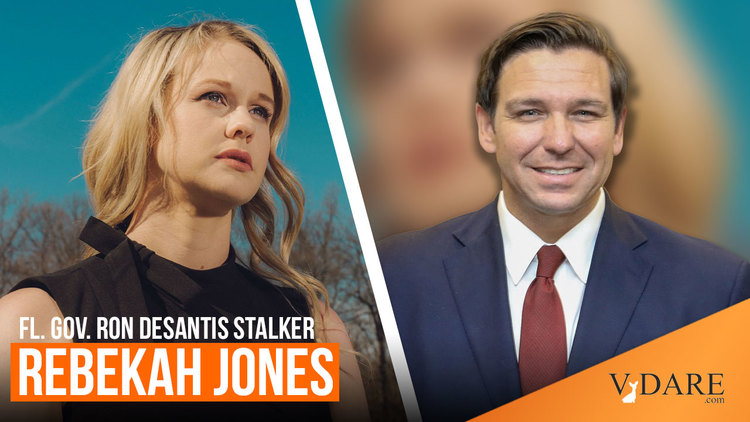 Earlier by Ann Coulter: "I Will Not Be Scienced"—Experts Wrong, Covid Could Have Come From Wuhan Lab After All

In another Very Florida story, a woman with a colorful criminal history has spent the last year collecting media accolades and a half-million dollars in donations by accusing the Republican governor of Florida, Ron DeSantis, of fudging the state’s COVID numbers.

Rebekah Jones [Tweet her] website designer (not “scientist,” as the media insistently claim), falsely accused DeSantis of doing what Gov. Andrew Cuomo of New York actually was doing with the COVID numbers. From the extensive media coverage, I figured maybe the DeSantis administration was taking advantage of gray areas to make the state’s record look as good as possible. Not as bad as what Cuomo was doing, but something.

Nope! This whole story was the fantasy of a crazed stalker, as explained in detail by Christina Pushaw in Human Events and Charles Cooke in National Review.

I forgot my own admonition that you can’t believe anything the media say.

The canonization of Rebekah Jones is only the latest example of the press latching onto any lunatic who attacks a Republican. Remember Bill Burkett? (CBS’s deranged source for the fake Bush Air National Guard story.) Jamie Leigh Jones? (Falsely claimed she was gang-raped in Iraq by Halliburton employees.) How about media star and Democratic presidential hopeful Michael Avenatti? (He was going to vanquish Donald Trump and Brett Kavanaugh with Stormy Daniels and Julie Swetnick, until his criminal past caught up with him.)

Hey, whatever happened to Haven Monahan?

Contrary to Jones’ allegations, she could not have been asked to falsify Florida COVID numbers, for the simple reason that she didn’t generate the numbers. She designed and updated the state’s website using data given to her by actual epidemiologists, but had no role in the collection of the information and no earthly idea what it should be.

On the other hand, she did:

As is probably true of many esteemed scientists, Jones had an illegitimate child in her junior year of college and, in 2016, as a graduate student at Louisiana State University, was charged with two counts of battery on a police officer.

But it wasn’t until she got to Florida that Jones really hit her stride. In 2017, then in her late 20s and an instructor at Florida State University, the married Jones had an affair with a student, Garrett Sweeterman.

She then penned a graphic 342-page essay on their relationship—written while she was married to the world’s most tolerant husband. Hello, honey! I’m home. I’ll be in the study for the next two hours working on that Penthouse Letter about my extramarital affair.

Jones has claimed that Sweeterman is the father of her 2-year-old child, but two days before he was to provide his DNA, her paternity suit against him was dismissed. (Only the hard-hearted would suggest she is a loon trying to entrap the kid into marriage because she prefers him to her husband.)

The manifesto reads like something a nitwit 13-year-old girl would write, giving a play-by-play description of their sexual encounters, followed by Sweeterman’s repeated attempts to break up with her, which she calls his “mind games.” Anyone reading her manifesto can see that her great love affair was nothing but a booty call for him.

In Jones’ own telling, by October 2017, Sweeterman was repeatedly texting her things like, “I can’t see you … I don’t feel right about any of it. … YOU’RE MARRIED. You have a family.”

His mother blocked Jones’ texts. His sister replied to one of her texts, saying, “I don’t know who the f— you are or what the f— you want but you better stay the f— away from my family. Delete my number and delete my families number you f-ing bitch.”

Jones’ ongoing hysterics resulted in criminal charges against her for vandalizing Sweeterman’s car, robbery and stalking. She was fired by the university, jailed at least three times and committed to a mental institution.

This is the “scientist” who was lionized by, among others, CNN, MSNBC, NPR, The Guardian and Cosmopolitan.

The smearing of DeSantis would be outrageous even if Jones were a rational human with an impeccable past, but she is not. DeSantis steered Florida through the pandemic with 30% fewer COVID deaths than New York, despite having a larger population and a lot more old people.

But journalists couldn’t be bothered to bring up Cuomo’s killing old people and cooking the books because they were too busy talking about his lats. Instead, our watchdog media attacked the governor with the best record on COVID, who was being stalked by a crazy woman.