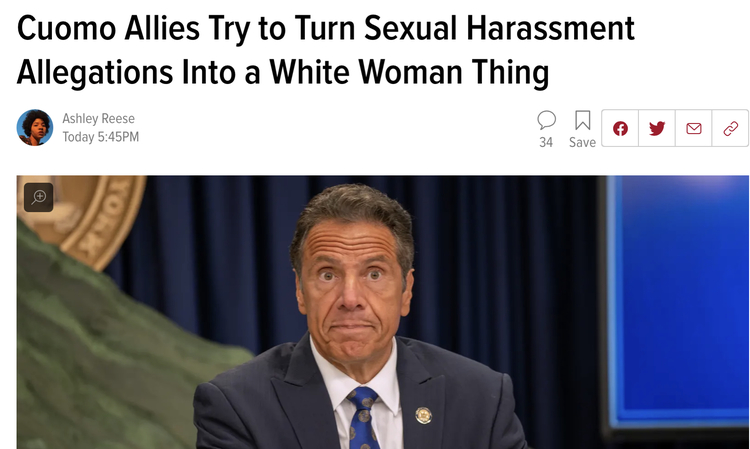 Gov. Cuomo Defended As The White Emmett Till

A year ago, New York governor Andrew Cuomo was the World’s Greatest Guy for going on TV during the pandemic and giving good briefing. Granted, he didn’t seem to actually be doing much effectual—the New York City region had by far the highest death in the country—but that wasn’t the point, the point was that New Yorkers were scared and here was an official coming on TV and giving good briefing.

So Democrats across the country quickly developed a Cult of Cuomo.

After a while, the Cult seemed to go to his head and he started displaying bizarre art projects, such as a giant papier-mâché mountain reminiscent of when Richard Dreyfus in Close Encounters of the Third Kind would distractedly mold the family bowl of mashed potatoes into Devils Tower.

Meanwhile, Cuomo was screwing up doing his actual job, most notoriously by listening to experts who told him to prioritize hospitals over nursing homes, which got thousands killed. Then his administration covered up that lethal scandal.

So, once Trump was safely off the scene, Democrats have turned on Cuomo, although they’ve decided to focus on the long-divorced Cuomo’s penchant for flirting with his women staffers, some of whom might not mind becoming First Lady of New York. After all, lots of other Democratic officials at the state level did something similar involving nursing homes, but we can’t have them all get in trouble, now can we?

But some of Cuomo’s supporters are fighting back by bringing up the most famous hero of the 20th Century. From Jezebel:

Allies of New York Governor Andrew Cuomo are working overtime to discredit the seven women who have come forward with sexual harassment allegations against him. The new line: It’s dangerous for white women to make accusations against Cuomo because… something something… Emmett Till.

The unnamed woman warned that unsubstantiated allegations in the “age of cancel culture” is dangerous, telling PoliticsNY, “If we keep going and believe immediately all this stuff and then it gets recanted then we go back to the space where no one believes women.” …

“It’s really unfortunate that the death of thousands of New Yorkers [in the nursing home scandal] had to take a back seat of allegations from white women. That the history of white women allegations is still given number one preference over anything,” said the source.

… Though sexual harassment and assault allegations by white women are undeniably regarded with more gravity than that of their non-white counterparts, they still aren’t taken seriously by default because sexual violence isn’t taken seriously enough in general.But the United States is racist, so the rare moments in which sexual violence against white women gets the splashy headline and pitchfork-wielding mob treatment is when the alleged perpetrator is Black or brown. Cuomo is neither; he’s white, no matter how much his brother might play the anti-Italian discrimination card.

But this didn’t prevent PoliticsNY’s Stephen Witt from attempting to validate the source’s flawed logic in his piece. The article originally included the following sentence, which has since been removed: “Historically, white women’s unsubstantiated claims that Black males were propositioning, whistled at or ‘recklessly eyeballing’ them led to hundreds, if not thousands of Black males being brutally lynched and murdered — most notably 14-year-old Emmett Till.”