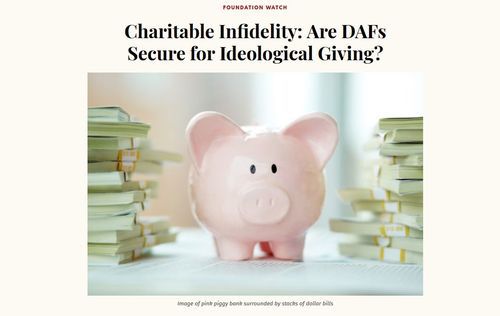 A new battle against patriots has emerged—and it’s more insidious than the direct hits we’ve gotten thus far. Corporate Cultural Marxists are stealing money right out of the hands of donors and using it however they please—and, technically, it’s totally legal.

This swindle exploits the fastest-growing method of charitable giving in America—Donor Advised Funds (DAFs)—to take control of, and then redirect, charitable dollars intended for patriotic causes.

Some of VDARE Foundation’s most generous donors have supported us with pass-through donations via DAFs. Many more are incorporating DAFs into their estate plans.

It has become clear that this mode of giving is dangerously unreliable for donors intending to give to patriot causes.

The risk is so great that even mainstream experts are advising the avoidance of Donor Advised Funds altogether:

DAFs are legal entities that hold obvious advantages for donors: giving can be timed to maximize tax benefits; they expedite the process of giving property and complex assets; they are exempt from mandatory disbursement or disclosure requirements, theoretically offering donors a level of anonymity if desired; they handle the red tape. Obvious advantage for the sponsoring organization: the fees on the funds they manage.

In the last five years, charitable contributions from DAFs have grown some 200%, while overall charitable giving has grown by only 21%. In 2017, donors contributed $29.23 billion to DAFs and used them to recommend $19.08 billion in donations to charities around the world. Charitable assets in donor-advised funds totaled $110.01 billion, a record high, passing the $100 billion mark for the first time. (See the National Philanthropic Trust’s  2018 DAF Report, released November 13, 2018.)

But serious problems have emerged with this tempting arrangement.

But more on Fidelity later.

It all comes down to ownership. At the end of the day, when you give money to a DAF, the donor-advisor (you) has relinquished control of that money. Period.

This isn’t just a hypothetical risk. Here are some real examples of flagrant thwarting of donor intent by DAFs:

Both donations were eventually disbursed. But still outstanding: as of this writing, a donation to our own VDARE Foundation is being held by Fidelity Charitable “under review”—with no explanation.

The situation is developing, but, as Philanthropy Daily’s Iain Berhoft reports (emphasis in original):

Fidelity Charitable Trust president Pam Norley commented that FCT monitors recipients not just for legal compliance but also for bad publicity. If a recipient appears on the Southern Poverty Law Center’s Hate Groups List, Fidelity will notify donors, but will still make the donation if the donor requests it.

The bottom line, however, is that Fidelity is under no legal obligation to do so. Once a donation has been made into a DAF, the donor can only “advise” how they are disbursed (hence the name). He or she has no legal rights beyond the “right” to make recommendations.

However, once monitoring the donated assets is no longer possible, lack of ownership of the fund can jeopardize the donor’s clearly-stated wishes.

Incredibly, even a major Beltway Right group, Young America’s Foundation, suffered a DAF refusing a bequest by a donor advisor despite his longtime support of YAF and very clear intent. It took two former U.S. Attorneys General, Ed Meese and John Ashcroft, to weigh in before the disbursement was made. (See Are Donor Advised Funds Safe for Conservatives, by Jason Barbour, above.)

There has been a distinct trend in recent years for the wishes of the deceased not to be honored and estate assets not to given to the intended recipients. There is reason to believe this trend will metastasize in the future—affecting even donor-advisors, like those listed above, who actively monitor their funds.

Why might a DAF consider withholding a gift? As YAF’s lawyer Kimberly Begg put it:

The gift in question was a substantial amount of money, capable of generating significant income and fees that benefited the sponsoring organization. Institutions rarely act against their self-interest, absent external influences. When there is no legal obligation for the sponsoring organization to honor the gift, and death prevents a donor from objecting to his intent being thwarted, hoarding is incentivized, not disbursal.

But scamming fees out of powerless and well-meaning philanthropists isn’t the only issue—it may not even be the biggest. There is something more sinister going on.

As seen above, the $PLC’s Hate Groups List smear is a blackball for the largest DAF in America, Fidelity Charitable.

This index ranks thousands of public and private companies and law firms on compliance with its radical agenda “pertinent to lesbian, gay, bisexual, transgender and queer employees.” Affiliates of three of the largest DAFs receive a perfect 100% score for implementing “internal requirements” for prohibiting philanthropic giving to patriotic organizations.

Significantly, several law firms have cited fear of jeopardizing their 100% Corporate Equity Index score as the reason for blocking the pro bono representation of reputable conservative and patriot groups. (VDARE.com’s long-time pro bono patriot lawyer was forced to quit by his white-shoe law firm—that’s one reason we’ve had to set up our Legal Defense Fund.) So much for John Adams.

BloodMoney’s mission is to halt financial services and credit card companies from processing donations to alleged “Hate Groups” a.k.a. American patriots. Although BloodMoney doesn’t have an explicit relationship with the $PLC, its proprietorial list of “Hate Groups” is suspiciously similar. On its website, BloodMoney brags about removing 158 funding sources from 123 “white supremacist” organizations. Who those organizations are, and what funding sources they’ve “removed” isn’t clear. But you can be sure DAFs are on their radar.

In a three-part series, Kotch has attacked the anonymity that DAFs theoretically afford donors:

Several charitable gift funds, including the largest charity in the United States, are helping dozens of hate groups raise millions of dollars by giving their donors a way to keep their identities secret.

This is, needless to say, total hypocrisy—Sludge.com itself is funded by cryptocurrency, keeping donor identities secret. (Give to VDARE.com via cryptocurrency here!)

The rhetoric used by these thug groups is familiar to anyone who has followed patriot deplatforming and financial blacklisting trends in modern America. Leftists target non-political institutions and frame normal business dealings as explicitly political acts. For example:

With the dramatic escalation of violence and intimidation by white nationalists and right-wing extremists, it’s way past due for sponsors of donor-advised funds to cut off any dollars flowing to hate groups,” said [President and CEO of the National Committee for Responsive Philanthropy Aaron] Dorfman. “They have every right to exercise discretion by refusing a donor’s request to fund a hate group. Just as companies have come under pressure to deny those groups financial and technology platforms following Charlottesville, the Tree of Life massacre, and now New Zealand, foundations should similarly deny them philanthropic services. It’s more than just a best practice, it’s common decency.”

Several charitable gift funds, including the largest charity in the United States, are helping dozens of hate groups raise millions of dollars by giving their donors a way to keep their identities secret...

‘This is really a choice by the [donor-advised fund] company whether or not they care about where these funds end up,’ said SPLC’s Beirich.

In fact, of course, the actual intent is to cripple patriot resistance and impose Political Correctness throughout the U.S.

Typically, targeted entities fold immediately. Former National Review editor John O’Sullivan once said that any organization that isn’t explicitly right-wing becomes left-wing over time. That rule can be extended financial institutions too. And the time it takes for their leftward evolution to be complete gets shorter and shorter every day.

This is especially true when a DAF is a niche foundation created to benefit a particular locality or single issue, rather than advancing a supporter’s patriotic worldview. It is a serious mistake to think that an institution with no history of supporting patriotic ideas will begin doing so upon receiving a gift from an individual who cannot legally control, and in the case of bequests, cannot even monitor, the use of that gift.

I should say at this point that there are examples of DAFs who claim to be unafraid of right-of-center causes. DonorTrust has even published a response to Young America Foundation’s anti-DAF warning.

But these organizations remain untested. And they espouse values completely in line with Conservatism Inc., which has never failed to stab patriots in the back when it really matters.

So what is to be done?

Donor Advised Funds are particularly dangerous because they are owned and controlled not by the donor but by institutions—who are open to Leftist pressure and benefit from the growth of fund assets.

Make current gifts and straightforward bequests to organizations with a track record of advancing your ideas.

Alert the recipient of your gifts so they are aware of them, and provide appropriate paperwork to reflect your intent. That way, if any unforeseen roadblock appears in the disbursal of your gifts, your chosen organization has evidence to argue its case.

Advance review of estate plans can protect intent and avoid costly litigation. If given the opportunity to review these plans in advance, perhaps amendments could be made.

Include a Sunset provision to dissolve your fund after a set number of years.

If your goal is to avoid having gifts spent all at once, choose endowments at organizations you trust over Donor Advised Funds controlled by Third Parties. Ask your recipient organization to report on the use of your endowment to future generations of your family.

We must do everything we can to protect America today.

Many of America’s most dedicated patriots partner with VDARE Foundation to keep America American.

But there is still no better way to inspire future generations of Americans (and members of your own family) than by making current gifts to VDARE Foundation—and leaving a legacy through your estate!