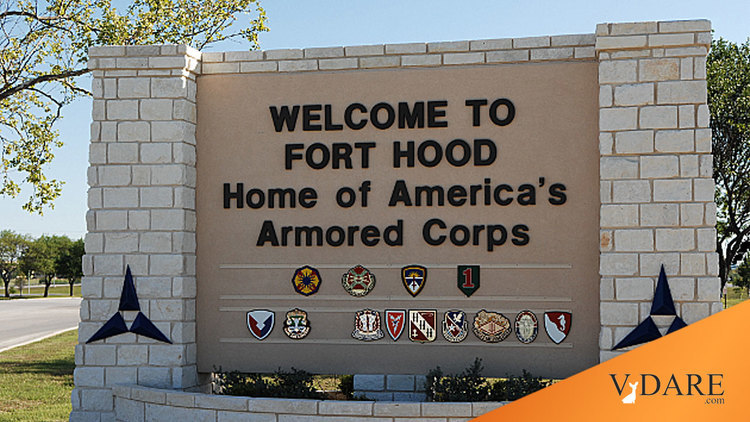 The Fort Hood massacre is all over the news, but, as usual, we can have no confidence that our government and the Main Stream Media will ask the proper questions. (Check out the VDARE.COM blog for better analysis.)

The fact that this happened at Fort Hood adds a personal perspective for me. During my twenty-year service in the Army National Guard (from which I recently retired) I spent about eight months total there.

My unit would often do its summer two-week annual training exercises there. And, when we were called up for Iraq duty, we resided for several months at Fort Hood. One cold morning in January we awoke and went to a Fort Hood airfield and flew to the Middle East. After completing our tour of duty, we flew back to Fort Hood and completed our out-processing.

So I guess you could say Fort Hood is a part of my life.

After I learned of the Hasan attack, I was curious as to where it took place. So I consulted the internet and found that the shootings occurred across the street and kitty-corner from where our barracks were. I was in the building in which the attacks took place, several times both before and after we went to Iraq. (Satellite area photo here.)

During my deployment I wrote a column for World Net Daily entitled Dispatches from Iraq. However, World Net Daily stopped publishing it after I actually got to Iraq, so most of the columns are about our training at "Fort XYZ" which was my code name for Fort Hood. (For Wall's VDARE.COM Memo From Mesopotamia columns, see here)

Fort Hood is a big base, about 340 square miles. Except for the built-up areas, where the shooting occurred, most of the post is wilderness—hills, forests, creeks, plains interspersed with shooting ranges and other specialized training areas. As on many army bases, the natural scenery is actually quite beautiful.

When I travel with my family, we often stop at military bases. (I can still get on base with my retiree card). My wife enjoys shopping at the stores, and we sometimes even spend the night on base lodging.

Generally speaking, military bases are safe and secure, places you wouldn't mind raising your children. In fact, they are positively peaceful. And they have many of the perks of a classic suburban American community. On Fort Hood's main post, there are stores, schools, a post office, theaters and cultural events. At a Fort Hood theater adjacent to the building where Hasan later shot the soldiers, I saw a great performance of Handel's Messiah a week after returning from the Middle East.)

On the other hand, from a terrorist's point of view, Fort Hood, like similar bases, is a prime target. If he can just get inside the gates, it would be easy for him to kill a lot of people. They are sitting ducks.

The fact is, most people on a military base are not armed. Most soldiers are not armed most of the time. Their weapons are kept locked up unless they are specifically being used for training. When we landed at Fort Hood returning from our Middle East deployment, the first thing we did after being congratulated by dignitaries was turn in our rifles.

That's one reason Major Hasan was able to shoot over 40 soldiers so easily. Another reason was he did it during SRP. SRP, meaning Soldier Readiness Process, is part of the preparation process for being deployed abroad, or part of the out-process for those who have returned from deployment.

The SRP is held in an inside area with tables set up as processing stations. The soldiers (who often are wearing only shorts and t-shirts) are given a checklist of all the stations they must visit. For example, at one station you get your will done. At another, the power of attorney. At another you get your eyes checked. Etc. (For an account of my SRP experience, click here).

So during the SRP period, which may last several days, the soldiers are milling about for hours on end. A big group of them, sitting or standing massed together. Therefore, a jihadi could easily start shooting – it wouldn't be hard.

In this case, there was also a graduation ceremony going on in the theater next door, hundreds of attendance. So it could have been even worse.

What about the Big Picture? Well, the Department of Defense called the Fort Hood Massacre an "isolated and tragic case". And our President, the same man who jumped to conclusions about Gatesgate, has cautioned us not to jump to conclusions:

"We don't know all the answers yet. And I would caution against jumping to conclusions until we have all the facts."

One explanation is that, with the pressure of his own upcoming deployment, Hasan simply snapped and started shooting.

But if that's true, why did he give his furniture away the morning before the attack?

Why did he arrive to his work at the deployment center with two concealed handguns and plenty of ammo?

Why did he reportedly shout "Allahu Akbar", the Islamic battle cry?

Nevertheless, there is still a lot of speculation about what "really" motivated Hasan.

Just imagine though, if a similar massacre, or even an act of violence which didn't kill anybody, had been perpetrated by an immigration reform patriot?

Would everyone be so understanding then?

The PC educrats at the teacher resource Facing History and Ourselves website, seeing a "teachable moment", already have a page up about the Fort Hood shooting.

What? How about mainstream Americans feeling less safe in the aftermath of various jihadi attacks?

Ironically, the U.S. military, which is much more PC than most people realize, bends over backwards to please Muslims and not offend their sensibilities. There are even field halal rations designed for Muslim soldiers. Soldiers deploying to the Middle East are instructed that "Islam is a Religion of Peace". Even evangelical Protestant chaplains in the military are careful not to offend Islam.

Despite all that, it didn't make Hasan feel any better. Just as with the radical Hispanic Lobby, pandering is never enough for those who simply don't identify with the American nation.

And, as a result of mass immigration and multiculturalism, even our military bases are no longer safe.