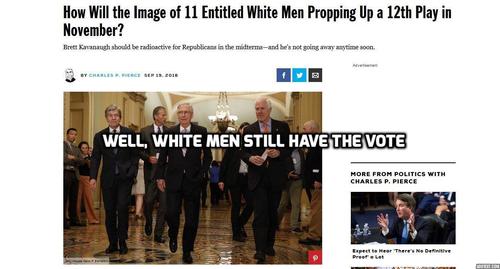 Let me begin by saying these commentators are making a brilliant and totally ORIGINAL point, the plain truth of which is outshone only by, as I’ve said, its sheer no-one-has-ever-made-that-observation-before-ness.

As the Supreme Court confirmation hearing resumes this week for Judge Brett Kavanaugh, it’s clear that the Republicans are simply too white to get the job done. I suggest the Republicans sign up some outside help, the way baseball teams make late-season acquisitions of pitchers and designated hitters for the playoffs.

Some suggestions (note: not all of the following individuals are Republicans, but none has any partisan profile that I am aware of):

Seriously, if feminists want to make the point that only female senators have any business conducting these hearings, they have a logical point, albeit an idiotic one.

Of course, the last time feminists bet big on women being certain allies in the fight against misogyny, they were the women of the O.J. jury.

Still, I get the logic of demanding women interlocutors.

But what is the thinking behind snickering at “white men” judging an accusation of sexual assault? Chuck Grassley is a big rapist?

You can be for rape or against it—I happen to be against it—but the idea that alleged sexual assault survivors need the loving care of black, Indian or Hispanic men to judge their stories flies in the face of crime statistics from around the globe.

In the history of the world, there has never been a more pacific, less rapey creature than than the white male of Western European descent.

I realize it gives The New York Times’ editorial board (recent acquisition: Sarah Jeong) warm feelings every time someone throws in the word “white” as an intensifier, denoting extra hatefulness, but really, guys, it’s getting old.

Can we please, for the love of God, drop the painfully trite, mind-numbing cliche about “white men,” as if somehow their whiteness makes evil even eviler?