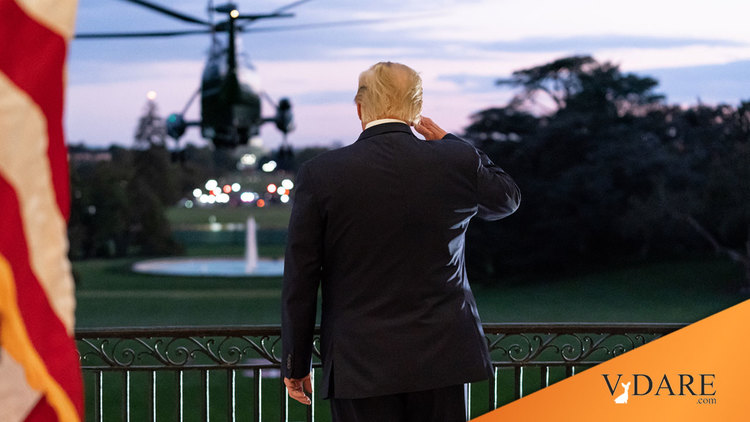 ANN COULTER: If You Want To Replace Trump, What WON'T Work Is Calling His Supporters "Deplorable, White Supremacist Insurrectionists"

Trump’s been called a lot of things in recent years, but I’m going to call him something new.

First, a refresher. In 2015, the Republican Party was on life support, with a “Do Not Resuscitate” order pinned to its chest and a priest called to administer last rites. Voters kept telling the party they wanted less immigration, less tax-cutting and less warmongering, but the GOP kept giving us more immigration, more tax-cutting and more warmongering. (For a detailed account of this state of affairs, see my columns and books—they make great Christmas gifts—free shipping for Amazon Prime members!)

Only when all other treatments had failed did we turn to an ancient medical treatment: the leech.

Ladies and gentlemen, I give you Donald J. Trump. There was no greater leech in all the land!

No insult intended. Leeching is a time-honored medical tradition, dating back to the Stone Age, for every conceivable ailment—an overabundance of peccant humors, convulsions, flatulence, scarlet fever, pleurisy, inflamed eyes and diseases of the throat, to name a few. Even today, leeches are the best treatment, as I understand it, for certain anticoagulant purposes. But because they are worms and bloodsuckers, not all patients find the treatment especially tasteful.

Trump was our parasitic worm.

Though any doctor will tell you leeching rarely works, the next time you hear someone say we didn’t get anything from Trump, I respectfully suggest you reply: ”I’ve got five words for you: Gorsuch. Kavanaugh. Coney F---ing Barrett.”

True, the only reason we got them is that neither Jared Kushner nor Kim Kardashian had any interest in the judiciary, so the Federalist Society picked Trump’s judges without interference. Albeit completely by accident, the leech still gave us a generation of solid Supreme Court justices. If that sounds like cold comfort, please recall that we just lost the Senate, and barely won the House by the skin of our teeth.

Moreover, without our leech, we would currently either be in Year Six of the Hillary administration, or Year Six of Jeb!’s presidency (who would have given us justices equal in stature to Harriet Miers and David Souter).

But you don’t leave the leech on the body forever. In leechery, once the parasite has served its purpose, it must be carefully removed and submerged in a solution of 70% alcohol to ensure that it is dead. (A common but incorrect method of performing the dismount is to set the leech on fire.)

Naturally, I am not suggesting we burn Trump or submerge him in a 70% alcohol solution.

If we’re coming up with a master list of possibilities after a few drinks, we might consider a traditional game of our dear Afghan allies, who play polo using a severed human head as the ball.

I submit it would bad for the office for Trump’s head to be used in a polo match.

Another idea to come from our perpetual wars is to model the dismount on the de-Ba’athification after Saddam. This workable, but harsh, method would require sending troops to rout Trump from whatever underground bunker he’s hiding in.

I have to reject that, too, for reasons of dignity.

But the one method that I am absolutely, positively, 100% sure will not work is to attack Trump supporters as deplorable, white supremacist insurrectionists.

You will notice that this is the precise method settled on by Biden, the Democrats and the media, for utterly cynical reasons. At this stage, Trump is poisonous to the conservative agenda, so he and the media have exactly the same agenda: Promote Trump.

Liberals want Trump more than we ever did.

Leeching as a medical treatment is not based on the leech’s inherent nobility. Trump was a desperation move.

Our idea was that Trump, for narcissistic reasons, would occasionally do things that we wanted. That was more than we were getting from the Republican Party. I defy anyone to name any of the other 16 GOP presidential candidates who could have beaten Hillary.

We hadn’t planned to get to that point, but there’s no use arguing with the GPS. That’s where we were.

The people who gave Trump more primary votes than any Republican in history weren’t idiots, haters or racists. To the contrary, anyone who withstood the slings and arrows to make Trump president in 2016 is not deplorable, but honorable. Not duped, but clear-eyed. They didn’t screw up; they did the right thing.

It may take some of them a little longer to figure out that we’ve gotten everything out of the leech that we’re ever going to get. But they are good and decent people and will realize soon enough: It’s over. We got our parasitic worm, and it’s time to move on. Sometimes the worm turns; sometimes we turn on the worm.