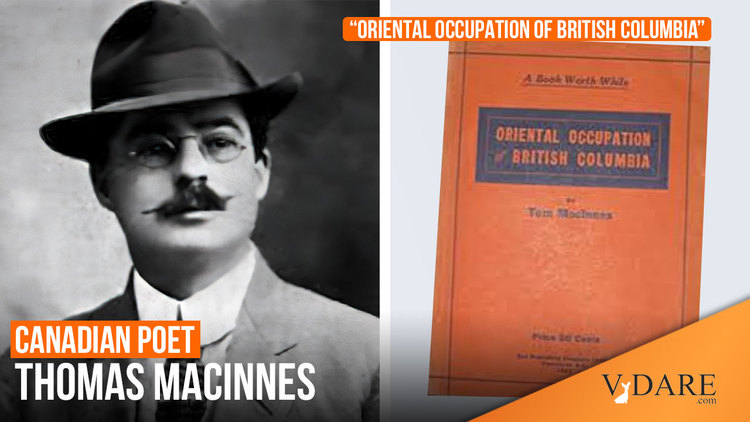 The list of forgotten-but-talented poets clearly outweighs the list of those who are remembered and celebrated. Especially in today’s America, one must have been black or queer or both, or from another minority , to receive recognition. The only qualification for notoriety seems to be whether one “seeks empowerment” from thumbing one’s nose at White Supremacy or privilege, which might explain the popularity of the former pimp and prostitute, Maya Angelou. A talent for words, or using rhyme to evoke the mysteries of life, is, apparently, no longer important, which helps explain why a poet such as Canadian Tom MacInnes (1867-1951) is doomed to oblivion. Justin Trudeau’s Canada, where erasing the “colonial past” has dethroned hockey as a national sport, will not celebrate an artist who turned against mass immigration and considered the Asian immigration one of the greatest threats to Canada’s future. 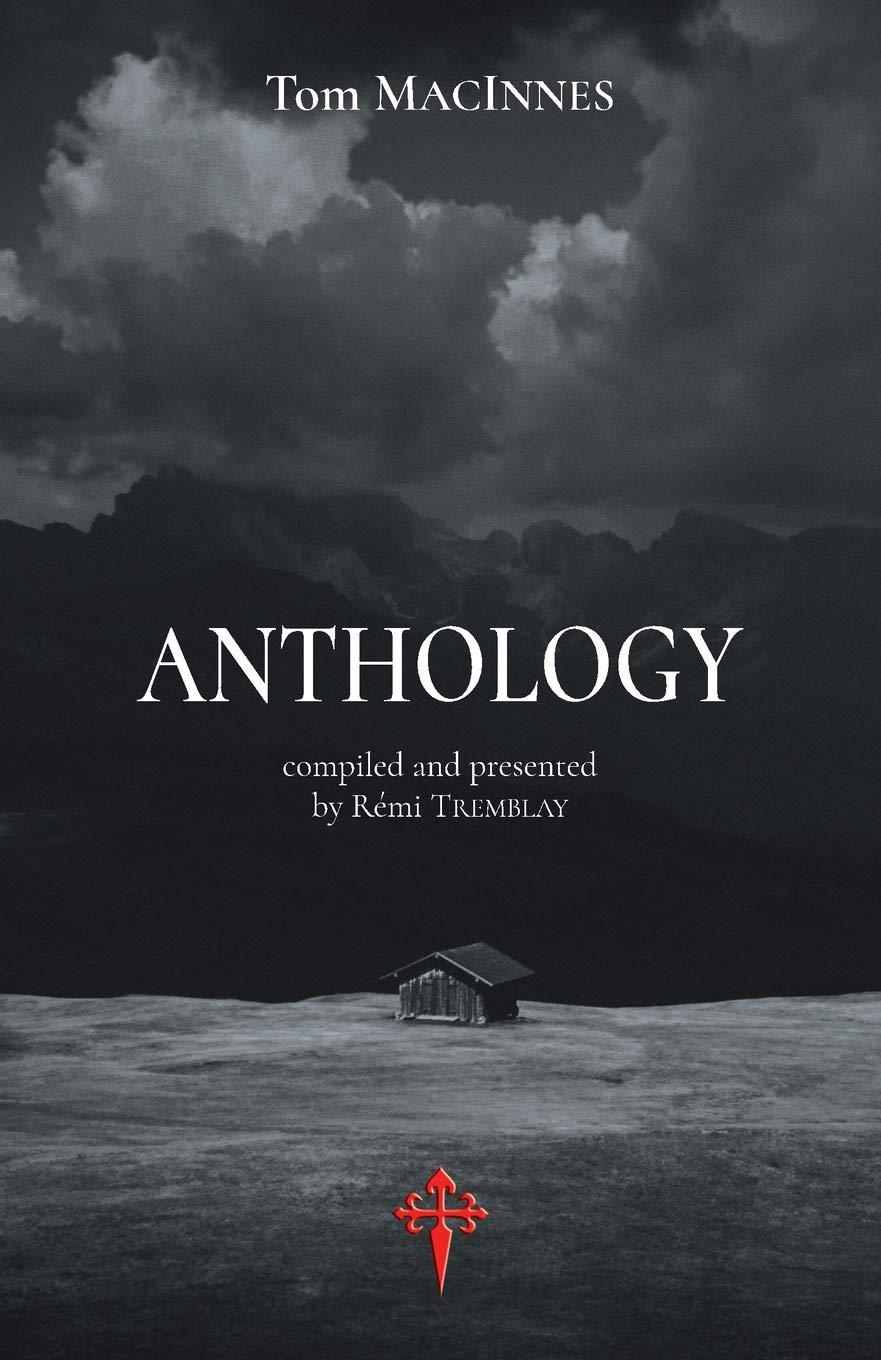 The fog surrounding MacInnes is so thick that even conservatives and immigration patriots have forgotten his name and legacy. Some anthologies still include his poems, but he is mostly ignored despite a unique style. He was interested in French Medieval poetry, and even invented a style inspired by songs from the Middle Ages. I fell upon his name while researching nativism in Canada. Although I am a French-speaking Quebecois, and a Quebec separatist, I believe this Anglophone Canadian should be celebrated as a great poet, which is why I assembled an anthology of his work. (Anthology—Tom MacInnes, January 2021.)

MacInnes’s inspiration was the Bard of the Yukon, Robert Service, author of The Cremation of Sam McGee and other stirring tales of the Great White North, widely considered the greatest Canadian poet of all time. MacInnes fits perfectly not only with Service, but also with contemporaries such as Jack London, a socialist and Asian-exclusionist, Rudyard Kipling, famous for his Barrack-Room Ballads and writing about the White Man’s Burden, or even Joseph Conrad, the Polish-British novelist who wrote Lord Jim and Heart of Darkness. The four men shared many points in common, like their sense of adventure. But most importantly, they held a common vision of Anglo-Saxon civilization as the pinnacle of humanity. 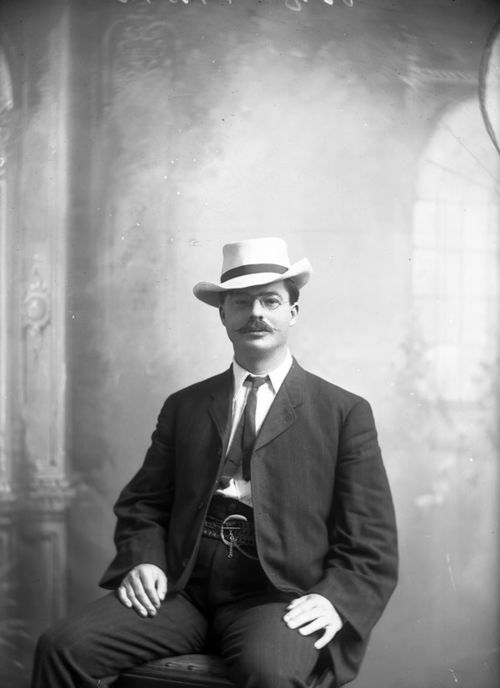 Born Thomas Robert Edward on October 29, 1867 in Dresden, Ontario, MacInnes moved with his family to New Westminster, British Columbia, in 1874. His father (the child of Scottish immigrant parents in Nova Scotia), a Harvard graduate and Union Army veteran, was so drawn to that wild province that he eventually served as a Member of Parliament, a Senator and a Lieutenant Governor. In untamed British Columbia, the Victorian standards of Cambridge, MA met the wild West.

When young MacInnes was ready to enter the man’s world, he chose the respected profession of law and attended the prestigious Osgoode Hall Law School of Toronto. His first official function, in 1896, was with the Bering Sea Claims Commission. It was charged with negotiating seal-hunting rights, then settling damages the United States owed England because the U.S. Revenue Cutter Service, the Coast Guard’s forerunner, had seized Canadian sealing vessels.

Interrupting this rather dull administrative duty was, to use London’s term, the “Call of the Wild.” MacInnes ventured to the Klondike as an official state representative before being commissioned to act as counsel for Chinese claimants to assess the damages done in Vancouver’s Anti-Oriental riots of September 1907, when whites, egged on by groups such as the Asiatic Exclusion League, ransacked the Chinese and Japanese quarters. This was a popular revolt against the “Yellow Peril” threatening the racial homogeneity of British Columbia.

MacInnes’ role entailed establishing links with the Asian community, but he also acted as a mole on behalf of Prime Minister Wilfrid Laurier within the Asiatic Exclusion League. He helped foment dissension within the higher levels of the organization, which eventually led to the league’s breakup.

MacInnes was an Asian enthusiast. He visited Japan and China countless times, even working in Peking to implement public transportation. From 1916 to 1927, he spent long periods in China developing business interests. MacInnes was considered such an expert on Asian culture that when the Canadian Minister of Trade and Commerce, George Foster, visited China in 1911, MacInnes prepared the itinerary and briefed him.

In 1924, he settled once more in his beloved British Columbia. Until then, he had been deeply liberal on the immigration question, enjoying the company of fellows from diverse origins. But the demographic balance of his homeland was changing. MacInnes decided the wave of Asians settling in Canada threatened the growing Victorian society.

Only then did he denounce the “Yellow Peril”—although he carefully avoided using that term—in such publications as Toronto Saturday Night, Toronto Star Weekly, Vancouver Daily Province, Vancouver Daily Sun and Canadian Western Lumberman. MacInnes was far from being the only one alarmed. By that time, the Asiatic Exclusion League, one of the 100 nativist and anti-Oriental organizations in British Columbia, had revived and boasted 20,000 members. Articles denouncing Asian immigration were common in the press. A newspaper was even devoted to this nativist crusade: The Anti-Asiatic Weekly. Politicians such as B.C. Premier John Oliver, Labour Minister Alexander Malcolm Manson, and M.P. Henry Herbert Stevens openly advocated Asian exclusion.

In 1927, MacInnes published his only political book, The Oriental Occupation of British Columbia, a collection of articles about the Asian question. Far from being the work of a fanatic, the essays were the work of a Sinophile who nevertheless wanted his own country to preserve its unique culture and social fabric. Far from being bigoted, MacInnes acknowledged that “some of the best friends [he] ever had, who more than once proved themselves friends in time of great need at home and abroad when those of [his] own race would have let [him] sink without a trace, were Chinese and Japanese.” 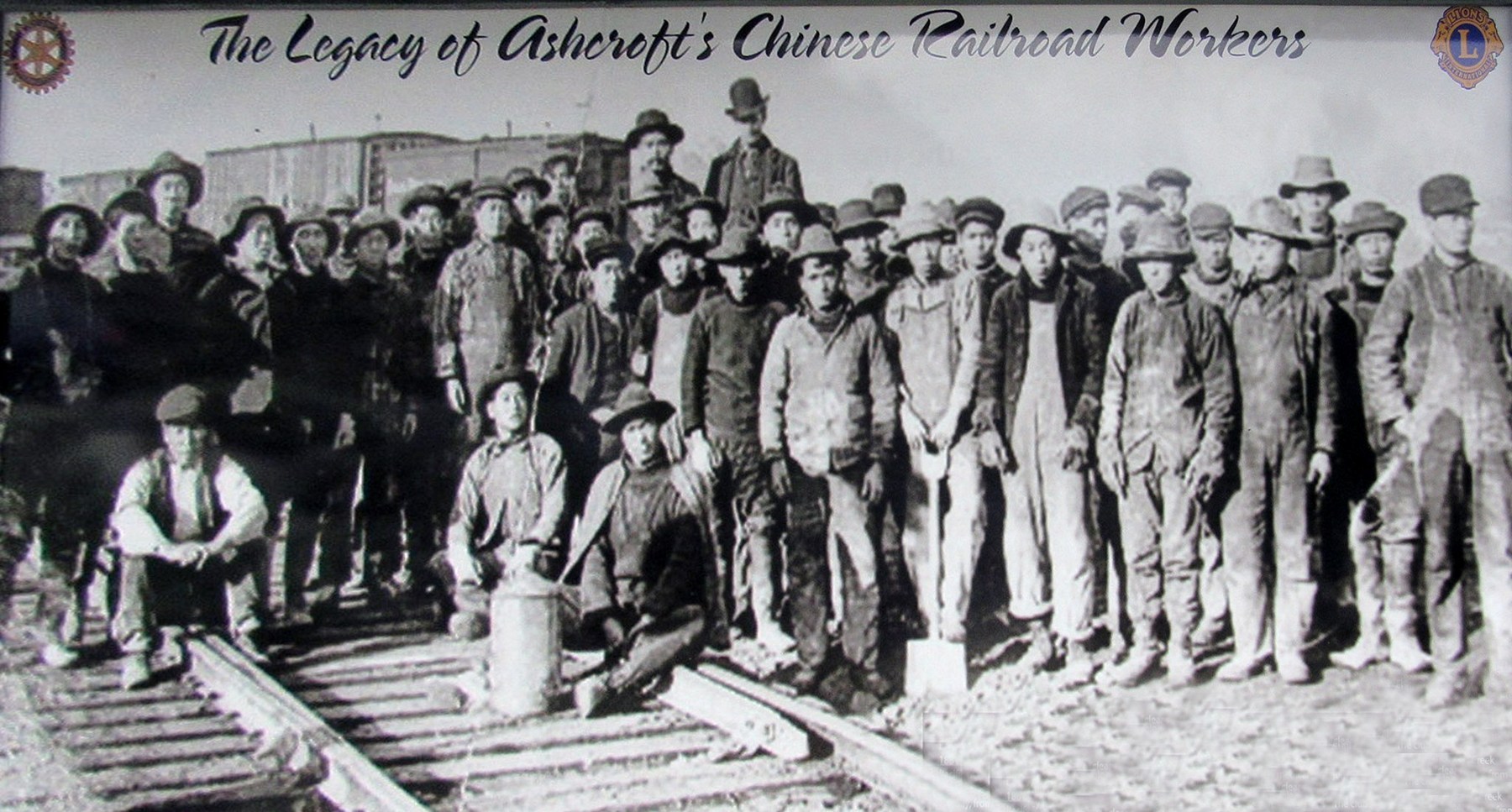 Still, he believed their “increase in the country would be disastrous to those already in occupation of it; especially if such intruding race be very prolific and very difficult to assimilate.”

The problem, MacInnes believed, was not the Asians per se, but multiracialism, which had failed everywhere it had been tried—even in Belgium with two very similar peoples. It was not thus a question of considering Asians as inferior. It did not matter “however excellent such alien blood may be in itself, and in its own kind,” he wrote. “A mix of sugar and salt is the spoiling of both.”

Like Jack London, MacInnes also thought that immigration was a tool of the capitalists to crush labor’s demands. With more employees willing to work for less and in harsher conditions, the arrival of thousands of Asians meant higher profits for factory owners, who didn’t care about the demographic impact of their policies. For MacInnes,

…the short-sighted commercial greed of our own people, eager for quick profit, at any cost to the future generations of their own kin, is responsible for these Asiatic colonies having been planted and frequently reinforced during the past forty years.

Unfortunately for Canadians, those greedy capitalists had the ears of federal politicians in Ottawa.

MacInnes also proved prophetic in forecasting the rise of China as a global economic and trading power, warning that one day, “instead of our people manufacturing a surplus of goods and seeking a market for them in China, it will be the other way about.” What seemed to be a gross fantasy has proven to be an understatement.

“All we demand,” MacInnes wrote, “is the dominance of our own race. We struggle to prevent our average white citizen from being displaced by Chinese and Japanese in the commercial, industrial and agricultural life of British Columbia.”

Among several propositions to stop the tide, MacInnes proposed a repatriation program based on voluntary departures, just as it had been practiced in South Africa with East Indian coolies. Restrictions would necessarily encourage them to leave and return to their motherland.

All these policies would ensure British Columbia remained a truly British province “for more than a generation or two longer.”

If British Columbians were generally conscious of Asian immigration’s threat, MacInnes thought the inhabitants of Eastern Canada didn’t much care about it. He thought their support was crucial and wanted all Canadians—coast-to-coast—to rally under the banner of “Keep Canada Canadian.”

In March 1932, Tom MacInnes cofounded the Nationalist League of Canada, a mild political organization devoted to the defense of Canadians’ rights.

During this politically active period of his life, MacInnes anchored radio talk shows, hosted on the Canadian Broadcasting Corporation (which, looking at how Woke the CBC is today, sounds more than somewhat surprising). He used his microphone to denounce the Red Menace as well as the “Yellow Peril.” Probably because of the many controversies surrounding him, the CBC eventually canceled his program in November 1938.

During the Second World War, MacInnes drifted away from the spotlight. He authored a last poetry book, In the Old of My Age, in 1947. At that time, he was living modestly and far from public affairs. The man who had been among the most celebrated poets of his days died almost forgotten on February 11, 1951.

Rémi Tremblay [Email him] is the Canadian correspondent of Présent.. He is the author of  Le Canada français, de Jacques Cartier au génocide tranquille and other books discussing Canadian history. He can be reached on Facebook, Gab, Gettr,  Telegram,  Twitter and VK.