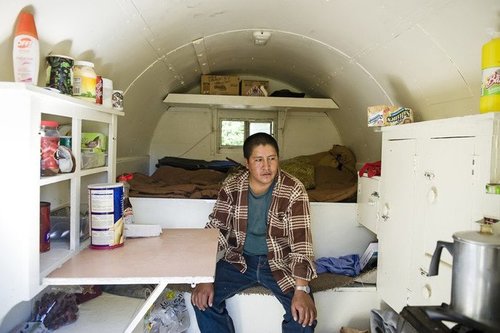 Commenter Veracitor points out that there’s a federal program providing guest worker visas for shepherds, typically from the Altiplano of South America:

Ranchers in Idaho want the Federal government to arrest “absconding” indentured shepherds who leave sheep rotting in the fields.

From the Wall Street Journal in 2013:

With Some Shepherds on Special Visas Abandoning Their Flocks, Industry Joins Calls for Federal Immigration Overhaul

… About 1,500 foreigners—mostly from Peru, Chile and Mexico—now work in sheep ranching in the U.S. on H-2A visas, the American Sheep Industry Association said.

But some don’t tend their flocks as long as they agreed to. “These men come legally at my expense, and then someone else recruits them,” says Barry Duelke, a Buhl, Idaho, sheep rancher who says two of his five foreign shepherds took off in March. “The system is broken.”

The shepherds’ visas are tied to sheep ranching. If they leave to work in another industry, they join the ranks of the country’s undocumented workers.

Idaho state Sen. Jeff Siddoway, a Republican and a sheep rancher himself, drafted legislation this year to target what some in the region call “wayward shepherds.” His bill called for arresting foreign shepherds who leave their flocks and for misdemeanor charges on the employers poaching them.

The legislature stopped short of introducing the bill after protests from dairymen and nursery operators, as well as from critics who said it smacked of promoting indentured servitude. “We weren’t looking to punish anyone; we just want the abandonment to stop,” Mr. Siddoway said.

Sheep ranchers now are counting on a federal answer to their problem. Ranchers say that if other agricultural employers were able to offer longer-term visas, too, they would be less likely to poach their foreign shepherds. They also say that allocating more funds for immigration enforcement of visa contracts would dissuade shepherds from abandoning their jobs.

From the Federal Register in 2015:

In contrast, wages for these occupations in other States effectively have not increased since 1994. A memorandum from Barbara Ann Farmer, Administrator, Office of Regional Management, to regional Certifying Officers in 1993, noted that of the 14 State-based AEWRs for Sheepherders and Goat Herders that were determined in 1994-1995, nine were set at $700 per month and three were set at $650 per month. Of the remaining two AEWR determinations, the Arizona AEWR was based on a reported weekly wage of $205, and the Idaho AEWR was set at $750 per month. By comparison, 11 of the current 14 listed AEWRs for sheep and goat herding are $750 per month, indicating that in the vast majority of States sheep and goat herder wages have increased only $50 per month in the most recent 20 years of the program.

The pay for indentured cowboys isn’t much better:

Mama, don’t let your babies grow up to be cowboys.