Little Marco Rubio Hopes to Be the Establishment Savior in Convention 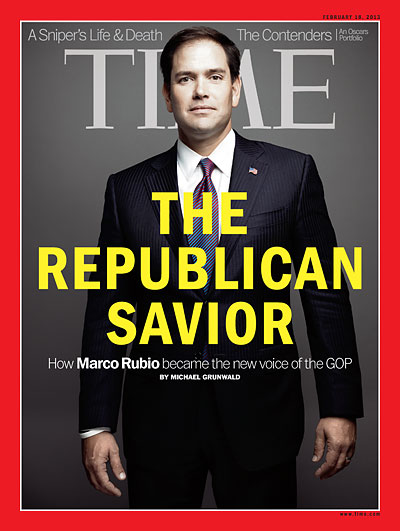 Senator Rubio’s “adios” after getting a pathetic 27 percent of primary votes in Florida (his home state) was never going to be the desired permanent farewell to presidential politics, since donors had already invested many millions of dollars in his sorry ass. (See my blog, Amnesty Opportunist Marco Rubio Says “Hasta la Vista, Suckers” — for Now.)

The oligarch honchos who run the GOP clearly want a dependable open-borders candidate to keep the cheap labor flowing in. Governor John Kasich applied for the position when he has declared his opposition to immigration restriction, in particular promising a “path to legalization” for the illegal alien millions in a February interview with Chris Wallace (Why Can’t Johnny Learn? Considering Governor Kasich as Illegal Immigration Ignoramus).

But Rubio provides a young, demographically correct face for the Hispanic voters, and the GOP establishment likes that. His stubborn refusal to let go of the delegates he accumulated now appears to be a long-shot hope that convention shenanigans will crown him with the top position.

Good luck with that strategy, GOP elites. Millions of Republican voters stayed home when Mitt Romney was the candidate, and he was far more acceptable than the Amnesty Man. If elites think the little citizens are angry now, just wait till the suits pick Little Marco as the GOP presidential candidate.

Sen. Marco Rubio has fought to take the delegates he won to the Republican National Convention in July, leaving him in a position to be a power broker or even, if everything falls into place, to make another run at the top of the party’s presidential ticket.

Under current rules, he doesn’t qualify to be considered for the presidential nomination — only Donald Trump has clearly met the threshold so far — but if the party starts looking beyond the billionaire businessman, Mr. Rubio could be in line.

“You can see absolutely how it could play out,” said Chris Bravacos, who led Mr. Rubio’s operation in Pennsylvania. “Whether that yields Gov. Kasich, or Marco Rubio, or someone who didn’t run, I think that is an open question.”

The senator from Florida and his aides aren’t saying what his goal is — many of them declined to comment or didn’t return messages left this week.

He suspended his campaign last month after a disastrous showing in his home state’s primary. But unlike most other campaigns, in which suspension effectively means an end, Mr. Rubio has insisted that his bid remains alive.

He sent letters informing party leaders in Alaska, Oklahoma and the District of Columbia that he did “not intend to release any National Convention Delegates bound to me as a result of the 2015 delegate selection process that took place in your State.”

“It is my desire at this time that the delegates allocated to me by your rules remain bound to vote for me on at least the first nominating ballot at the National Convention,” Mr. Rubio said.

It takes 1,237 delegates to win the nomination.

Al Cardenas, former head of the American Conservative Union and Rubio mentor, said the 44-year-old is smart to play his cards close to vest.

“Sen. Rubio should be on the shortlist of VP candidates,” Mr. Cardenas said, adding that he also might be weighing how best to position himself for future presidential bids. “He may be looking to another cycle and interested in making friends more than making enemies.”

“I haven’t heard anybody other than Beltway types — mostly under significant influence of alcohol — discuss the idea of Marco suddenly reviving his candidacy and emerging like a phoenix out of the ashes in Cleveland, but usually, in the morning, after the hangover lifts, it again looks far-fetched,” she said.

Of the Republican candidates, only Donald Trump still has a realistic chance of securing the delegates needed to win the nomination outright on a first ballot at the convention.

If he falls short in the remaining primaries, the convention would hold another vote and delegates bound to candidates on the first or second ballot would be free to vote their conscience.

Mr. Rubio’s biggest hurdle is a convention rule adopted in 2012 requiring the nominee to have won a majority of delegates in at least eight states. Only Mr. Trump has clearly met that threshold right now, though Mr. Cruz says he will meet it by the time the convention begins.

Convention delegates can change that rule, leaving Mr. Rubio — and a handful of other prominent Republicans — with a narrow but possible path to the nomination.

Republicans also could seek to change the rules and allow Mr. Rubio to pledge his delegates to another candidate, putting him in the role of a power broker.

Jim Merrill, a senior Rubio adviser, did not respond to phone calls and emails seeking comment for this article but has said that as a delegate to the convention he remains “100 percent loyal” to the senator.

“As one of his delegates to the convention, I will follow his lead in the coming weeks and months,” Mr. Merrill said.

Others are more eager for Mr. Rubio to share his next move.

“I would like to think that they would reach out to say something like, ‘You are one of the senator’s delegates. Hey, guys, this is what the senator is thinking,'” said Rina Shah Bharara, a Rubio delegate from the District of Columbia.

Ms. Bharara said she is so desperate to stop Mr. Trump that she would choose Hillary Clinton over the New York billionaire in the general election.

She added, however, that Mr. Rubio is better off not trying to stage a convention comeback.

“It is over for him; people within the party have spoken,” Ms. Bharara said. “I am of that school of thought that something fresh and completely different would be welcome, somebody who could come from the floor, whether it is Speaker [Paul D.] Ryan or someone else. I don’t think it should be him as someone who is looking as this as ‘I have a shot.'”