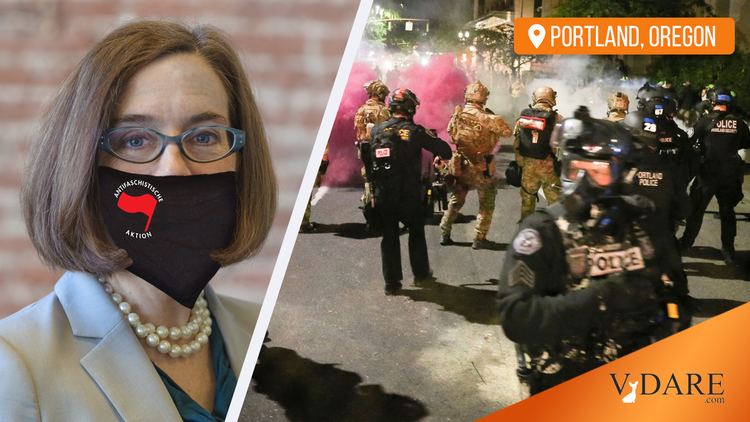 Ann Coulter: Dems Are The Party Of Antifa

All this because, after 50 days of raging violence, President Trump has finally sent federal agents to restore order in Portland, Oregon.

Although all those quotes are indeed from Democrats about a Republican president, it wasn’t Trump. They were Democrats Richard Russell, George Wallace and Orval Faubus, denouncing President Dwight Eisenhower for sending troops to enforce desegregation at a schoolhouse in Little Rock, Arkansas.

In Portland, Chicago, New York, Seattle, Atlanta and elsewhere, children are not merely being blocked from the schoolhouse door—they’re being killed. They’re being maimed. Citizens are having their property looted and their public spaces destroyed, all with the connivance of local Democratic officials.

And once again, the Democrats are championing states’ rights to protect domestic terrorists.

“Trump & his stormtroopers must be stopped.”—Nancy Pelosi

Democrats and the media want the federal government to brutally crack down on people who don’t wear masks—whatever the states say—but faced with an actual violent rebellion, the feds are supposed to stand back and let the governors lead!

Oh, we’ll get away with it. The media won’t report on the violent rioting that the federal government is quelling.

Boy, are they right.

If Faubus had had MSNBC, CNN and the New York Times covering for him, Americans wouldn’t have had the first idea why Eisenhower was sending troops to Little Rock.

Until the feds arrived in Portland last week, the Times’ most expansive description of the riots was this aside in a chipper article about Seattle’s “autonomous zone”: “Perhaps taking a cue from Seattle, demonstrators in Portland, Philadelphia, Richmond, Virginia, and elsewhere have tried to set up protest sites of their own.”

The media pitch the Lesbian Motorcycle Collective as “Portland Moms.”

When reporting on the “protests,” MSNBC and CNN invariably feature some area of Portland far from the carnage, showing people strolling, the sun shining, and not a single building on fire!

You’ll never see the part of the city—a little area called “downtown Portland”—where thousands of black-clad antifa have been laying waste to everything in sight.

Trump should say nothing about Portland except: “Look at the videos.” I recommend you start with journalist Andy Ngo’s Twitter feed: @MrAndyNgo.

After hiding the truth for 50 days, this week, Democrats and the media have been gasping in horror at the sight of federal law enforcement agents appearing in such a bucolic little burg.

Here’s some of what’s being hidden from you:

Night after night, the “peaceful protesters” have thrown bombs, bricks, frozen water bottles and cement blocks at the Portland police, whom they vastly outnumber. They’ve fired mortars, marbles, ball bearings and commercial-grade fireworks at officers, sending dozens to the hospital.

They have blinded police with laser guns, slashed their tires, assaulted journalists, and set fire to buildings, statues and homeless people’s belongings.

So far, the rioters have done millions of dollars in property damage. In the first few days of July, shootings were up 240% compared to the same period in 2019.

Portland police precincts and the federal courthouse have been under constant siege—windows smashed and people barricaded inside as the buildings are set ablaze.

Or, as summarized by Ali Velshi on the Antifa Channel: “While most protesters are peaceful, small groups have clashed with authorities.”

Look at the videos.

Once federal officers moved in, the Times finally decided to tell its readers about Portland. For an accurate portrayal of the “protests,” the Times interviewed local reporter Robert Evans, who has tweeted:

So you know you’re getting the straight poop from one of Portland’s leading antifa cheerleaders.

I don’t care if you haven’t heard about what’s happening in these cities. I don’t care that their governors and mayors don’t think it’s a problem. Unless you’re Orval Faubus, it’s the federal government’s responsibility to quash insurrections and protect the rights of American citizens.

The very reason we have a Constitution (instead of the Articles of Confederation) is precisely to allow the federal government to put down rebellions. It wasn’t a federal school in Little Rock. It’s the president’s job—more vital than randomly bombing Syria!—to suppress domestic insurrections.

This is not the first time Republican presidents have had to deal with terrorist-supporting Democrats. It probably won’t be the last.