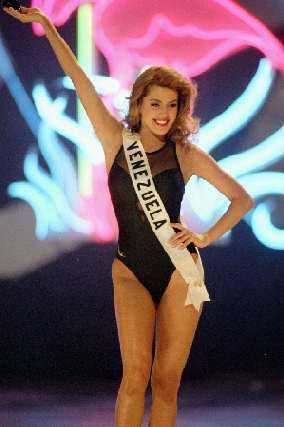 So Donald J. Trump fell for the bait and got sucked into another battle of personalities, this time with former Miss Universe Alicia Machado. Of course, the political wisdom of this move was doubtful. As Ann Coulter noted, Trump wins when he talks about the issues, he loses when he talks about himself. But, as usual in these cases, there is an important policy point overlooked in the Main Stream Media feeding frenzy.

Alicia Machado, the former Miss Venezuela, has been part of a Democratic plan to ambush Donald Trump for over a year. Hillary Clinton accused Trump of fat-shaming Machado during the final part of the first presidential debate because, years ago, Trump supposedly mocked her for gaining weight, in violation of her agreement after she won the Miss Universe title. Trump, as is his nature, hit back hard, going on one of his early morning tweet storms against her, prompting Clinton to harrumph he was going after “a woman”—who, apparently, can do anything they want but also must never be criticized.

What the aftermath really revealed, however was that the Clinton campaign either didn’t vet or simply didn’t care about Machado’s past.

Leaving aside her tawdry personal problems, including cheating on her fiancé by having sex with another man on national television, Machado has a long series of legal issues. She was reported to have been an accomplice in a 1998 attempted murder case in Venezuela, was accused by the judge of making threats against him, and was also romantically involved with a Mexican drug dealer, apparently even bearing his child. [Court Docs Purportedly Show Alicia Machado Had Mexican Drug Lord’s Daughter and Lied About It, by Christian Datoc, Daily Caller, September 29, 2016]

Which is significant. According to the Department of Homeland Security:

Some immigration experts claim none of this would have preclude her from becoming a American citizen, which Machado duly became on August 19. If that is the case, why do we even bother having the requirements at all?

The individual who oversees the body that gave Machado citizenship is Obama appointee Leon Rodriguez, head of U.S. Citizen and Immigration Services, who has spoken about his desire to give illegal immigrants “a chance.” GotNews reports Rodriguez grew up speaking Spanish and is the “son of immigrants and the grandson of refugees,” thus falling into the predictable pattern of minorities who see immigration policy as a kind of revenge on the dumb Anglo-Americans who let them into the country in the first place. [BREAKING: Immigration Chief Who Let Narco Baby Mama #AliciaMachado Become U.S. Citizen Is Cuban Jewish Immigrant, by Charles C. Johnson, October 1, 2016]

Alicia Machado should serve an exhibit of how American immigration policy is failing to exclude those who are likely to cause problems for our already existing citizens. Would-be immigrants who are directly connected to criminal organizations would obviously be banned under any kind of a rational system. Just as Black Lives Matter can seemingly only find thugs and criminals to rally behind, Clinton’s new surrogate actually helps strengthens Trump’s case that the U.S. needs stricter immigration policies. And this would be a far more important issue to discuss then the ludicrous issue of “fat shaming.”

But, again blatantly acting as Democratic campaign surrogates, the Lying Press has managed to transform what might have been a debate over policy into a gossipy bitch session over trivia. And what’s more, journalists unblushingly defend the discussion of personalities as somehow more important than a debate over immigration policy. 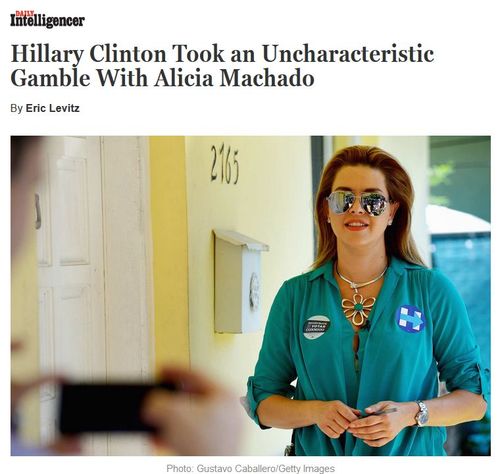 Mexican drug cartels are, in essence, unabashedly materialistic terrorist organizations. Conventional presidential campaigns rarely put forward surrogates with (alleged) associations this damaging. What’s more, in light of this background, Machado’s recent naturalization provides Trump an opportunity to repurpose her story to bolster his campaign’s narrative — that our immigration system is allowing criminals (or, at least, suspected criminals) into the country. But the Democratic nominee made Machado the star of her post-debate messaging, anyway. In doing so, Clinton displayed a profound trust in the public’s capacity to recognize what is and is not important in the former Miss Universe’s story. (Or else, displayed a profound inability to perform a basic Google search.) So far, Clinton’s gamble seems to have paid off. Mainstream media outlets have focused more attention on other instances of Trump’s fat-shaming than they have on Machado’s alleged indiscretions — and rightly so. [Hillary Clinton Took an Uncharacteristic Gamble With Alicia Machado, by Eric Levitz, September 29, 2016. Emphases added]

For that matter, when it comes to sexism, it is hard to top Machado’s comments about Melania Trump. She sneered: “I think I speak more English than her. She’s a doll. She’s a decoration. That’s how I see her” [Former Miss Universe sizes up Melania Trump: “I think I speak more English, by Louis Nelson, Politico, September 27, 2016]. (It’s worth noting these comments, again, come from a beauty pageant contestant who was incapable of keeping the weight off.)

There has been no MSM condemnation of this attack on Mrs. Trump. It’s especially disgusting because Mrs. Trump not only speaks better English than Machado, but also speaks four other languages, including her native Slovenian, French, Serbian and German. [A Crash Course on Melania Trump: She’s Fluent in 5 languages, CBS News]

The Clinton campaign is denying Trump’s allegation Hillary Clinton specifically helped Machado obtain citizenship so as to be a more effective prop in the campaign. However, it’s all too obvious that Machado became a citizen, not because of any love or attachment to our country, but simply to oppose Trump. [Trump’s ‘disgusting’ tweet about Alicia Machado got one thing right. It isn’t what he thinks. By Greg Sargent, Washington Post, September 30, 2016]

And in a recent interview on Spanish language television, Machado acknowledged it is becoming easier to become a citizen because the Obama Administration is deliberately trying to get as many Latinos as possible to vote against Trump. As she put it: “At [the] immigration level, everything is very smooth precisely because they want us to vote” [Shocking Video: @HillaryClinton’s Narco Baby Mama #AliciaMarcado Says U.S. Gov’t Wants Immigrants Like Her to Vote, by Charles C. Johnson, GotNews, October 1, 2016].

And Machado’s first thought on becoming a citizen was not pride in her new country or awe at becoming a citizen of the world’s sole superpower—but a sneering assertion of tribal antagonism against her “fellow Americans.” As she boasted: “The Latino vote is the one that will decide this year many things in these elections.”

All our lives are worse because Machado, and so many others like her, are in the country.

Associates of criminals, professional victims, driven by hatred of a country and culture they were incapable of creating themselves, Obama’s imported “new Americans” are being made citizens precisely because they will vote to further national decline.