McClatchy: Democrats Have Been Prepping Alicia Machado for a Year

Millions of Americans heard the name Alicia Machado for the first time this week in the final minutes of the most-watched presidential debate in history.

But there were actually a year’s worth of twists and turns, largely behind the scenes, that led Hillary Clinton to utter the name of the Latina beauty queen, turning Machado into a major figure in the final weeks of the presidential race.

American Bridge, an opposition research group, learned about the 1996 Miss Universe’s story last year. It sold the information directly to the Clinton campaign and the Democratic National Committee and passed it on to Correct the Record, a super political action committee, which also sold it to Clinton’s campaign, according to three people familiar with the transactions who were not authorized to speak publicly.

And Clinton’s campaign clearly made the strategic decision that what Machado had to say about her former boss, Donald Trump, would be far more beneficial to the Democratic hopeful than any questions raised about the pageant winner’s colorful past.As Trump inched closer to winning the Republican nomination, Machado contacted the Clinton campaign herself to reveal that he had humiliated her for gaining weight, taunting her with names like “Miss Piggy” and “Miss Housekeeping.” …

Machado’s story wasn’t exactly a secret. Trump wrote about her in one of his books and she has been mentioned in numerous articles in the United States and Latin America, including by McClatchy. In July 2015, she announced she was writing a book about Trump.

It wasn’t until months after Machado’s experience became known to the Clinton campaign that the nominee brought up Machado’s name at the debate, knowing it could resonate with two key constituencies: women and Hispanics. …

The next day her campaign was ready.It released a two-minute video about Machado. Cosmopolitan magazine published a lengthy article, clearly already written, about Machado that included multiple photos of her draped in an American flag. 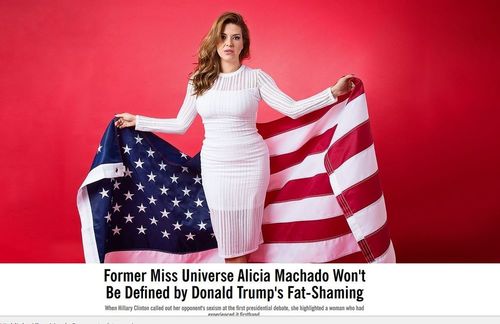 “I have my past. Of course, everybody has a past,” Machado told CNN on Tuesday. “And I’m not a saint girl. But that is not the point now.”

On Friday, Machado slammed Trump in a statement issued through her publicist.

“The Republican candidate and his campaign are, once again, launching attacks, insults and are attempting to revive slanders and false accusations about my life, in order to humiliate, intimidate and unbalance me. These attacks are cheap lies with bad intentions,” she said. “This, of course, is not the first time the candidate insists on discrediting someone or insists on demoralizing women, minorities and people of certain religions through his hateful campaign. This is definitely one of his most frightful characteristics. Through his attacks, he’s attempting to distract from his campaign’s real problems and his inability to be the leader of this great country.”

All the allegations had been reported in the media before the presidential campaign started and would have been easy to find. A Clinton aide declined to say what was known about Machado’s background, saying only, “We’ve worked with Alicia the way we do with all of our surrogates.”…