Abolishing America (Cont.): AntiFa Faced Down Again In The Battle of New Orleans

Supporters and opponents of New Orleans, Louisiana’s three remaining Confederate-era monuments converged Sunday May 7 in mostly peaceful demonstrations which nevertheless highlighted stark tensions between blacks and whites, the Left and Alt Right and even Southern Heritage advocates versus Civic Nationalists.

The impetus for this dust-up: an invitation from the anti-monument group Take ‘Em Down NOLA to come celebrate Mayor Mitch Landrieu’s planned removal of the Confederate monuments with a march to Lee Circle, where the Robert E. Lee monument stands, complete with a celebratory second line, or brass band. In response, groups ranging from California Trump supporters to Southern Nationalists traveled to New Orleans to demonstrate in support of the statues.

A multi-ethnic rainbow coalition of Confederate heritage supporters had been guarding the Jefferson Davis monument for about two weeks since masked construction workers dismantled the first statue, Liberty Place Monument on April 24th. On May 1st, this group of about a dozen monument supporters was swarmed by at least 150 Antifa, some of whom showed up in a threatening military style vehicle. Bottles were thrown at the Confederates, a woman in a wheelchair was maced and punches were exchanged.

On Sunday, the multi-ethnic Confederate group was once again out demonstrating by waving Confederate flags in front of the statues and livestreaming on Facebook. Save Our Circle member George Peterson reiterated his position that protecting the monuments is about, “Heritage not hate”. He was guarded by an Indian man (from India, that is)  named KK, who was armed with a semiautomatic rifle. Open carry is legal in the state of Louisiana.

The Take ‘Em Down Nola group had a small press conference denouncing the supposed “white supremacist” message of the monuments, followed by a march where supporters chanted, “Take ‘Em Down!”

The local heritage groups were joined by right-wing supporters from around the country, galvanized by media attention from popular conservatives Kyle Chapman and Timothy Treadstone (aka Baked Alaska). Baked Alaska himself was in attendance and livestreaming the event.

Although the vast majority of demonstrators on all sides were white, there were moments of heightened racial tension.

The League of the South group used fiery rhetoric including Politically Incorrect language and even refusal to be guilted about slavery. The gist of their position seemed to be a defensive one: that they felt their heritage, race and culture were under assault from the left. “I’m a proud white man,” one of them shouted. “I’m proud to defend my ancestors.”

In a separate incident, a dreadlocked black man yelled out, “the white race should go extinct”. “That’s what nature does,” he told Baked Alaska during a Periscope stream, “That’s why your genes are recessive.”

“Do you want to genocide white people?” Baked Alaska asked him.

“I don’t have to. It’s inevitable,” he replied. “I’m pretty excited about that.” 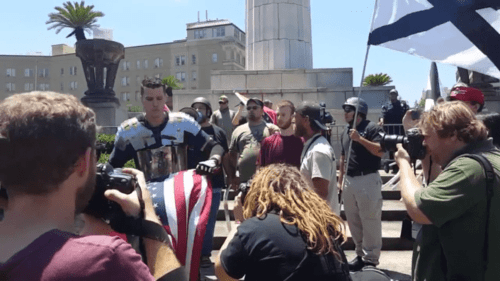 At one point, a bizarre moment of violence erupted.  One unknown man clad in Roman-style armor and draped in an American flag, allegedly part of the civic-nationalist Trump group, approached the Lee monument where the League of the South was gathered and knocked over several Confederate flags.

He had been spotted earlier in the day repeating the left-wing slogan, “Black Lives Matter”.

The armored man, who internet commentators have mockingly nicknamed the “Cuck Knight”, tried to push his way through to the monument. He then charged like a rhinoceros into a group of Confederates. Several punches were thrown before the “Cuck Knight” was sent writhing to the ground clutching his head. 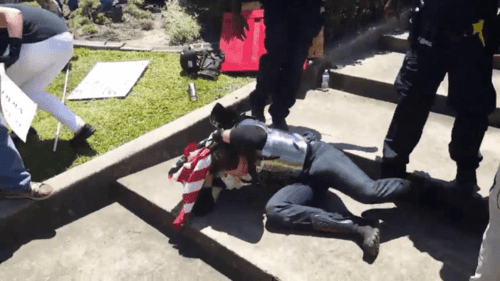 Three individuals were arrested by NOPD in connection with the incident. All of them were charged with disturbing the peace. [Confederate monument protesters in New Orleans clash at Lee Circle, By Beau Evans, NOLA.com, May 8, 2017]

The rest of the day went peacefully—besides a bomb threat called into the P.G.T. Beauregard Monument which diverted several fire trucks to the area before the threat was eventually dismissed. 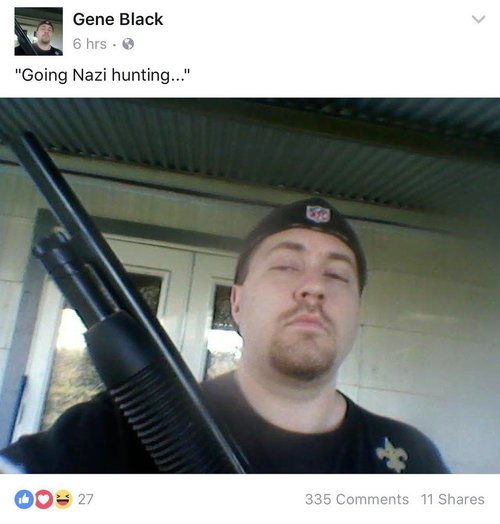 Essentially, despite posting pictures of themselves on social media with shotguns and claiming to be out for blood, members of Antifa once again backed down from threats of violence at a second consecutive major political flashpoint, following the Battle of Berkeley on April 15th and a subsequently smaller showing at a Berkeley free speech rally on April 27th.

Bill McHann, leader of Save Our Circle, a private FaceBook group dedicated to defending the monuments said, “I believe this helped. I got multiple reports that [Mayor] Mitch [Landrieu] wanted to take the statue down on Sunday but couldn’t because of all the protestors.”

McHann was also optimistic about news from a press conference held Tuesday morning by the Monuments Task Force, another group defending the statues. Group representative Richard Marksbury announced a lawsuit against the city of New Orleans asserting that the city does not have the legal authority to remove the equestrian statue of General  P.G.T. Beauregard because it is owned by the City Park and not the City of New Orleans. [City Park, not city of N.O. owns Beauregard statue, says task force, WWLTV.com ,  May 8, 2017]

The lawsuit references a note sent to Steven Pettus, president of the City Park Improvement Association Board of Commissioners, by Lieutenant Governor Billy Nungesser:

I am troubled that the CPIA Board of Commissioners has apparently been aware of this ownership interest for some time now, yet has not exercised its fiduciary duty to protect this valuable state asset. The Beauregard statue, which is an historic work of art by renowned sculptor Alexander Doyle, marks the main entrance to City Park and is vital to its identity.

However, according to WWL-TV in New Orleans, on Tuesday afternoon Judge Kern Reese denied a temporary restraining order protecting the P.G.T. Beauregard Monument. 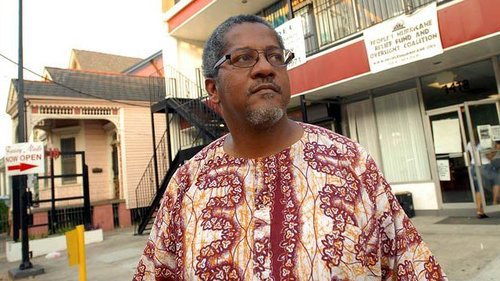 Neither side is backing down. In fact Take ‘Em Down Nola organizer Malcolm Suber (right) a black self-avowed Marxist, has called for, “immediate action to remove all monuments, school names and street signs dedicated to White Supremacists." [Take 'Em Down NOLA calls for widespread removal, renaming of 'symbols of White Supremacy', By Laura McKnight, NOLA.com ,  March 24, 2017]

On Thursday Suber told the New York Times that his demolition plans include the Founding Fathers. Asked about a statue of George Washington by New Orleans Public Library he said, “He was a slave master. Right?” [Tempers Flare Over Removal of Confederate Statues in New Orleans, By Richard Fausset, May 7, 2017]

Bill McHann tells me that the Save Our Circle group is in for the long haul, focusing on gathering more locals who can come at the ready in case Mayor Mitch Landrieu [Email him]  decides, despite the lawsuits and legislation percolating through the Louisiana state government to protect the monuments, to take them down in the middle of the night.