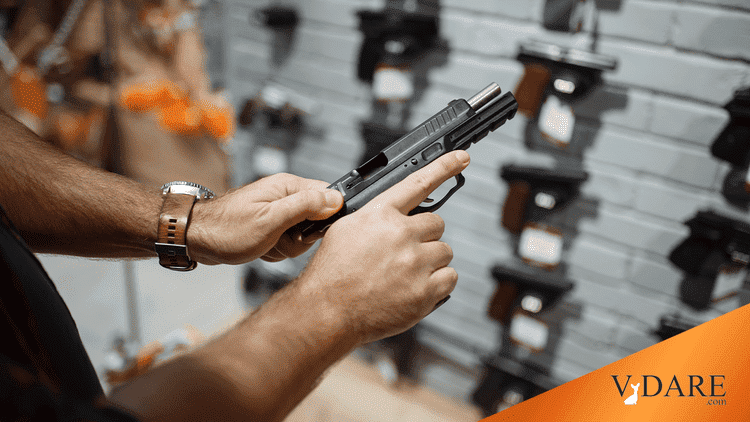 A Nation Arms Itself—For What?

With the shooting death of Trayvon Martin by a neighborhood watch volunteer who was legally carrying a 9-millimeter handgun, the familiar wail has arisen from our cultural and media elite:

America has too many guns!

“Open carry” and “concealed carry” laws should be repealed.

Florida’s “Stand-your-ground” law, replicated in two dozen states, threatens to turn America into the Tombstone of Doc Holliday and Wyatt Earp. This is insane!

The United Nations agrees. This year, the world body takes up the global control of firearms, including small arms in the hands of citizens.

According to Sen. Rand Paul, the U.N. “Small Arms Treaty” will almost surely mandate tougher licensing requirements to own a gun, require the confiscation and destruction of unauthorized civilian firearms, call for a ban on the trade, sale and private ownership of semi-automatic weapons, and create an international gun registry.

No more Colt .45s in the top drawer or M-1 rifles in the closet.

Forty-five Republican and 12 Democratic senators have declared their opposition to any such U.N. treaty, which means it is dead in the water the moment it is launched from Turtle Bay.

For when it comes to Second Amendment rights, Middle America has spoken—at the ballot box and the gun store. And Congress, most state legislatures and the federal courts have all come down on the side of the Silent Majority.

In District of Columbia v. Heller (2008), the Supreme Court struck down one of the most restrictive gun laws in the nation, assuring district citizens of their right to keep a gun in the home.

U.S. Judge Benson E. Legg just struck down the section of Maryland’s gun law that left it to local authorities to decide if a citizen could carry a gun outside his house.

Virginia Gov. Bob McDonnell, mentioned as a running mate for Mitt Romney, just signed a law striking down a 20-year ban that kept residents from buying more than one pistol per month. In Virginia’s legislature in 1993, McDonnell had voted in favor of the one-gun-per-month rule.

The new law ignited New York City Mayor Mike Bloomberg, who calls Virginia “the No. 1 out-of-state source of crime guns in New York and one of the top suppliers of crime guns nationally.”

Two New York cops have been shot this year, one fatally, with guns from Virginia.

But there is another side to the gun story, and University of Houston Professor Larry Bell relates it:

“Law-abiding citizens in America used guns in self-defense 2.5 million times in 1993 (about 6,825 times per day), and actually shot and killed two and a half times as many criminals as police did (1,527 to 606). These self-defense shootings resulted in less than one-fifth as many incidents as police where an innocent person was mistakenly identified as a criminal (2 percent versus 11 percent).”

The figures tell the story. Along with rising incarceration rates, the proliferation of guns in the hands of the law-abiding has been a factor in the nation’s falling crime rate.

And that proliferation has accelerated under President Obama.

According to ammo.net, tax revenues from the sale of firearms and ammunition have gone up 48 percent since 2008, with Iowa, North Carolina and Utah registering revenue gains of over 100 percent.

Background searches in December broke the all-time monthly record set in November, as 1,534,414 inquiries were made to the National Instant Criminal Background Check System about prospective gun-buyers.

Half a million inquiries came in the six days before Christmas.

Why are Americans arming themselves?

More and more citizens, says the National Rifle Association, fear that if or when they confront a threat to their family, lives or property, the police will not be there.

Reports of home invasions and flash mobs have firmed up the market for firearms. After the 1992 Los Angeles riot, when Californians found themselves defenseless in homes and shops, gun sales soared.

Others argue that a fear of new laws in an Obama second term, or even the possible confiscation of handguns, is driving sales.

Gun-control organizations claim that gun ownership is actually declining, that fewer and fewer people are buying more and more of these guns.

But the numbers seem to contradict the gun-controllers.

A 2005 Gallup survey found that three in 10 Americans own a gun, that 40 percent had a gun in the house, that nearly half of all men own a gun, as do one in seven women. Two-thirds of all gun-owners gave as a reason they own a gun: protection against crime.

America is an armed camp, with the South and Midwest the most heavily armed. Yet, still, Americans buy guns in the millions every year.

Why? Whatever the answer, it is our business, not the U.N.’s.

Patrick J. Buchanan needs no introduction to VDARE.COM readers; his book State of Emergency: The Third World Invasion and Conquest of America, can be ordered from Amazon.com. His most recent published book is Churchill, Hitler, and "The Unnecessary War": How Britain Lost Its Empire and the West Lost the World,reviewed here by Paul Craig Roberts. His new book Suicide of a Superpower: Will America Survive to 2025? was released October 18.