When I saw this below from Neontaster,  I wondered what it was about—the phenomenon of Trump's Luck is that he says normal things about crime or terrorism (things that we all know)and then something happens that proves it again, and the media are like "Dumb Luck".

The danger of insta-outrage at every Trump statement - you hand him a massive victory if he ends up being even partially right. pic.twitter.com/NIjhCD2OwZ

I mean, we did that "Bomb Threats At Jewish Centers" thing—many of them traced to a black guy that wanted to make his white ex-girlfriend look bad. 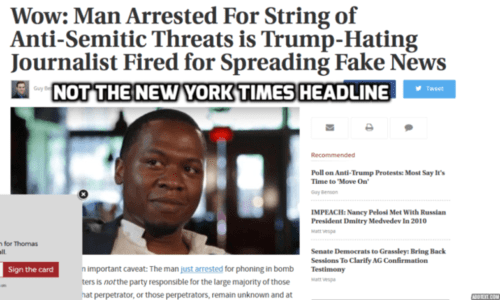 I did an article that compared it to the "Black Church Burnings" panic—when the churches were almost all burned by blacks. The point is that anonymous threats against Jewish Community Centers were blamed on white Trump supporters, in spite of the fact that these were, you know, anonymous.

Even when Juan Thompson, above, was arrested, the MSM insisted that there was more to the story. (Probably white Trump supporters.)

From the Atlantic, which did not mention Thompson's race:

The FBI has arrested one suspect in connection with the recent bomb threats against Jewish institutions and Jewish Community Centers, known as JCCs. According to the arrest warrant, a culprit in at least some of the threats is Juan Thompson, a St. Louis native who was fired from his job as a reporter at The Intercept in early 2016 for fabricating stories. The FBI alleged that Thompson “appears to have made some of the JCC threats as part of a sustained campaign to harass and intimidate” a former girlfriend. The details in the FBI arrest warrant against Thompson link him to eight specific threats. But they do not account for the much larger wave of phone calls threatening Jewish institutions.

But I missed this graphic in the lower right corner of the first Tweet—there's been a new hoaxer discovered:

I did remember that some of the threats which didn't come from black reporter Juan Thompson were supposed to have come from "overseas." I would have guessed Arabs.

Arabs, after all, are on record as hating Jews, and actually do bomb Jewish Community Centers and the like. Trump, on the other hand,  was once grand marshal of the Salute to Israel Parade in  New York.

Here's Noah Pollak, a neoconservative supporter of Israel on this recent blamestorm:

It was shameful how so many people exploited this mystery to score points against Trump and his supporters. https://t.co/g5jomDwLOx

More details from the NYT:

We don't know what motivated this guy to call in bomb threats to members of his own community. He could have been motivated by animus against his own community, or by what Trump was quoted as saying, in a remark that was widely condemned "to make others look bad".

That would also be hated, but it would be animus against your community and mine—a hatred the MSM doesn't want to know about.