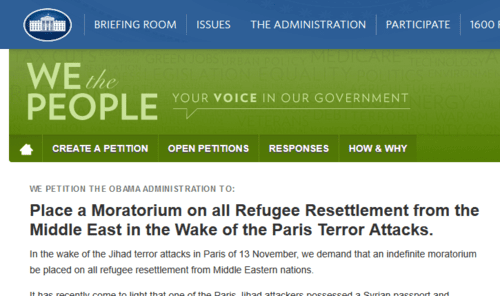 We've blogged (here and here) on the petition that has been lodged with the White House website to "Place a Moratorium on all Refugee Resettlement from the Middle East in the Wake of the Paris Terror Attacks" but the number of signatures is still only 3 12,481 as of 6:36 p.m December  6!—another —87,519! are needed by December 14.

UPDATE: Readers have reported technical issues trying to sign the petition. Keep trying until it works.

This is somewhat surprising as polls show overwhelming opposition against accepting (Poll: 60 Percent Of Americans Against Taking In Refugees, by Juliegrace Brufke, Daily Caller, November 24, 2015) and even the Congressional GOP (!) is making noises about doing something (GOP eyes spending bill as leverage in refugee fight, November 27, 2015).

Looking at the other petitions, I see that the successful ones tend to be supported by tightly-organized interest groups. Immigration patriots are not (yet) tightly organized: Indeed, I gather that no other immigration patriot groups have helped this petition drive except Ann Corcoran's indefatigable Refugee Resettlement Watch. [And, Joe Guzzardi points out, Californians for Population Stabilization]. Additionally, I'm sure Americans are afraid of giving their names to a White House controlled by the increasingly-vindictive Minority Occupation Government. And maybe something else is going on too: I was unable to sign giving my VDARE.com email address, but had to use my personal one.

Nevertheless, there will be a lot of gloating if this petition fails. I urge VDARE.com readers to sign, and/or get family members beyond the reach of professional reprisals and/or the IRS to sign

The link, again, is here. (Good news! One more person signed while I was writing this!)