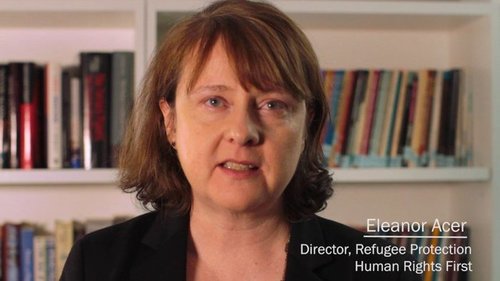 Hey, VDARE.com Readers: SIGN THE *%$#@!!;^*## PETITION Demanding A Moratorium On Refugee Arrivals From the MidEast!!!

Signing a petition is usually a pointless activity—or worse: It may give signers the illusion that, in signing, they've actually done something.  In general, the activity falls within Snopes.com's definition of "slacktivism":

Slacktivism comes in many forms, but its defining characteristic is its central theme of doing good with little or no effort on the part of the person inspired to participate, through the mechanisms of forwarding, exhorting, collecting, or e-signing.

But petitions formally submitted to the federal administration via their "We the People" website are (supposedly) guaranteed to shake loose some response from the administration if the petitions qualify according to the Terms of Participation:

The White House will respond to petitions submitted through We the People that comply with these Terms of Participation and reach the second signature threshold [of 100,000 "signatures" within 30 days of the start].

Alarmingly, though, with three days elapsed since its launch as I write this, the petition to Place a Moratorium on all Refugee Resettlement from the Middle East in the Wake of the Paris Terror Attacks has collected fewer than 5,000 "signatures"; at this rate, it will be woefully short of 100,000 "signatures" at the December 14 deadline.

This shamefully-low rate exists despite the fact that VDARE.com's Patrick Cleburne publicized the petition on its November 14 launch day.  So where are all you VDARE.com readers???

It's not a big deal to "sign."  I use quotation marks around "signature" and "sign" because all that's involved is typing your first name, last name, email address, and ZIP code into the form on the right side of the petition page, under "Add Your Name" and then clicking on the "Sign Now" virtual button.  Completing the process involves opening the email you'll receive in response to your submission and clicking on a link within it.  After that, your initials, city, and state will appear in the "signatures" display at the bottom of the petition page.

So you need to do that and get some friends to do it, too.  It would be atrocious if December 14 were to roll around and the signature count were short of 100,000.

Beyond that, though, this is still kind of slacktivism.  So to avoid feeling like a guilty slacktivist, you'll want to follow up by giving Congress an earful as directed by Refugee Resettlement Watch's indefatigable proprietress, Ann Corcoran:

Call your Members of Congress, your US Senators and all in the leadership—Senator Mitch McConnell (KY is the leading state getting Syrian refugees right now!), Speaker Paul Ryan, and members of all key committees—tell them to cut the money for the US Refugee Admissions Program right now until they can assure America’s security!