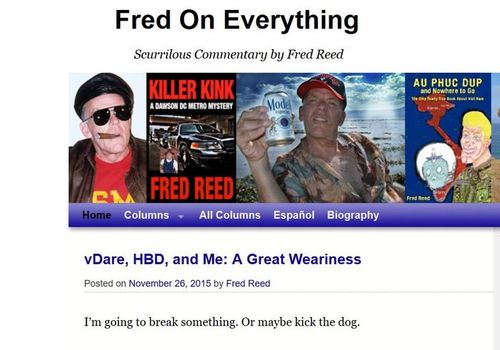 The Fulford File | Fred Reed Admits To “A Great Weariness.” He Should Quit While He’s Still Behind.

Fred Reed is a veteran of the Vietnam War and a veteran reporter who promotes himself as a no-nonsense kind of guy. Unfortunately, "no-nonsense" as an attitude doesn't prevent you from occasionally talking nonsense, as in his repeated attacks on Ann Coulter's carefully-researched book, Adios America…and on VDARE.com.

VDARE.com’s Allan Wall (who also has a Mexican wife and family, although Fred ignores it) replied to a previous attack by Fred in Memo From Middle America: Ann Coulter Right, Fred Reed Wrong, On Mexico’s Age Of Consent (And Litter).

Fred, a conservative of somewhat paleo sympathies, has moved to Mexico (which, as he points out, is in some ways freer than  21st century America) and has a Mexican family. Apparently this causes him to get emotional about people on the Dissident Right who criticize Mexicans. His latest effort starts out:

Sometimes it seems to me that I am the only gringo on this whole sorry planet who does not think Mexicans are scum–filthy, perverted, and witless.  They are not, dammit. If you want to criticize Mexico, stick to facts, such as that it is corrupt to the roots of its teeth and terribly governed, that the narcos are out of control, the police criminals, and that it qualifies as a failed state by some (reasonable) definitions. And they play loud music at three a.m. during fiestas. All of this is true.

But spare me the twaddle. In fact, spare everybody the twaddle. No matter who does what, there are going to be a lots of Mexicans in the US, or more correctly American citizens of Mexican descent. Maybe the public ought to have an accurate idea of them. But no. We get twaddle, chiefly from sites like vDare, from groups calling themselves the Human Bio-diversity (hbd) movement, and from Ann (“Legs”) Coulter.

vDare, HBD, and Me: A Great Weariness, FredOnEverything.org, November 26, 2015 [Crossposted on Unz.org, which has comments.]

Not that it has done him any good.

Fred Reed, however, seems to be going farther than that—to asserting that Mexicans are no worse than Americans, and Americans shouldn’t be worried about them.

But America is not, in fact, getting the nice Mexicans. As Fred himself once wrote

…those who swim the Rio Bravo are not doctors and engineers, gangs assuredly exist, and Hispanic children do poorly in school. Not good, especially the last.

[Amnesty Sì, Amnesty No, And Other Irrelevancies, February 8, 2013]

Fred claim of the only slightly higher criminality of Hispanics than whites in America is based on Ron Unz’s His-Panic, The American Conservative, March 2010. Ed Rubenstein debunked it in National Data | Ron Unz Vanishes Hispanic Criminality…Not!

Fred also has this:

Howsomever, I find (the very conservative) Heather Mac Donald of the Manhattan Institute, who analyzed data from the Department of Justice. (New DOJ Statistics on Race and Violent Crime | American Renaissance) In the past, the feds have lumped Hispanics and white offenders together, making it impossible to tell who was doing how much of what to whom. Mac Donald, note, is a conservative and no advocate of open borders. She found that Hispanics are 26% more likely than whites to commit a violent crime. Hardly admirable, but hardly a crime wave. Since she has opposed immigration she cannot easily be suspected of dodgy analysis.

But what Fred is linking to is a Jared Taylor American Renaissance column [July 1, 2015] which, while using a table from a Heather Mac Donald article, doesn’t say that at all. Jared is talking about interracial crime:

We can also calculate how often criminals of each group choose victims of other races. As indicated below, when whites commit violence they choose fellow whites as victims 82.4 percent of the time, and almost never attack blacks. Blacks attack whites almost as often as they attack blacks, and Hispanics attack whites more often than they attack any other group, including their own. 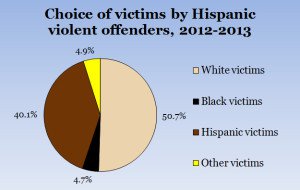 You know, that might actually be a crime wave. I mean, I realize blacks are worse, and Mexico is kind of wild, but most Americans don’t want to live in Mexico.

Finally, having denied both Age of Consent laws (refuted by Allan Wall here)  and greater acceptance of underage sex in Mexico—the kind of Mexicans he knows don’t do that kind of thing—Fred comes out with this:

And now we have Coulter: “When it comes to child rape, the whole family gets involved. (Then Coulter writes. “Far from ‘I am woman, hear me roar,’ these are cultures where women help the men rape kids.”

Yes, Miss Goebbels. And they eat human flesh. I will now go and kick the dog, who seems to be in hiding.

His link goes to the Huffington Post whining about Coulter saying that, but you can read her—with VDARE.com links to the original stories and pictures of the rapists—proving it here: Ann Coulter: Donald Trump–STILL Right About Mexican Rapists.

This is not something Coulter made up. This is something Fred would have noticed if he had actually read Adios America.

In the section of the Coulter book reproduced below, she provides chapter and verse:

This is where cultural differences can create problems. Americans aren’t used to female relatives of raped and murdered children actively helping the perpetrator get away with it. [VDARE.com note: For example, Coulter describes the horrifying “Baby Hope” case in which the killer’s sister helped him dispose of the body, and the mother never reported her missing. Everyone involved was Mexican, and illegal.] They can’t grasp that the girl’s parents either didn’t know or didn’t care that she had been raped and murdered.

Far from “I am woman, hear me roar,” these are cultures where women aren’t accustomed to standing up to men, even men who rape kids. In 2013, illegal immigrant Bertha Leticia Rayo was arrested for allowing her former husband, an illegal immigrant from Guatemala, to rape her four-year-old daughter, then assisting his unsuccessful escape from the police. The rapist, Aroldo Guerra-Garcia, was aided in his escape attempt not only by his ex-wife, but by another woman, Krystal Galindo. (Kind of a ladies’ man, was Aroldo.) Guerra-Garcia entered a plea to aggravated criminal sodomy and aggravated indecent liberties with a child and was sentenced to eleven months in prison. In a separate case, the mother of the child rape victim was indicted for cruelly beating the child.23

That same year, the government busted up a child pornography operation in Illinois being run out of the home of three illegal aliens from Mexico, including one woman. At least one of them, Jorge Muhedano-Hernandez, had already been deported once. Peoria Journal Star headline: “Bloomington Men Plead Guilty to False Documents.”24

In 2014, Isidro Garcia was arrested in Bell Gardens, California, accused of drugging and kidnapping the fifteen-year-old daughter of his girlfriend, then forcing the girl to marry him and bear his child. The mother suspected Garcia, then thirty-one years old, had been raping her teenaged daughter, but did nothing. All three were illegal aliens from Mexico.25

In New Mexico, there was a father-son child rape duo. When being sentenced for repeatedly raping a three-year-old and an eight-year-old, Mexican illegal immigrant Luis Casarez’s argument to the judge that he did not deserve jail time sounded like Marco Rubio’s talking points about hardworking illegal immigrants with roots in America: “I have been here for many years”—Casarez said, incongruously, through a translator. “That’s why,” he added, “I’ve been working instead of getting involved with problems.” Other than that one thing.

That’s just as it appears in Adios, America.

We have people to deny this kind of thing—they’re called the U.S. Main Stream Media. We don’t need Fred Reed piling on.

Reed entitled his latest attack “A Great Weariness.” Obviously, he’s too weary even to follow arguments he wants to refute. He is, after all, 70—even older than VDARE.com Editor Peter Brimelow. He should quit while he’s still behind.