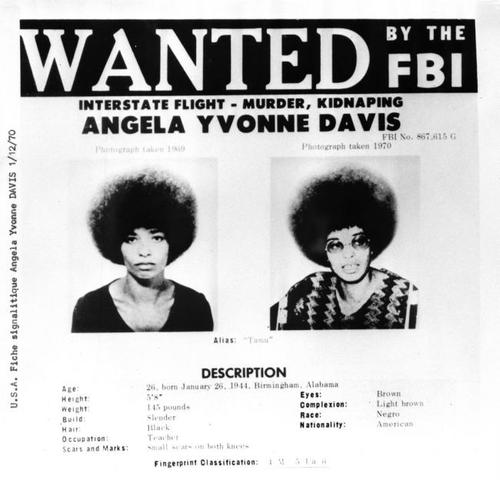 Who Are The Extremists Again? Angela Davis Gets Human Rights Award

Angela Davis is a Communist and a former Black Panther. With the help of a Communist Party lawyer, she was acquitted of purchasing firearms that were used in the murder of a prison guard. Now, she enjoys a lucrative career lecturing on the evils of the American people generally and whites in particular. Her present prominence, like that of Hanoi Jane Fonda, stands as a condemnation of our country.

Seriously, it’s part of the problem in this country that some views are noncontroversial (e.g., Angela Davis’s) while other views are so controversial (e.g., Charles Murray’s) that they can barely be hosted outside a Bilderberg conclave. The Paid Public Speaker filter is not well understood, but it plays a big role in determining what is considered acceptable public discourse.

Of course, who qualifies as "acceptable" is mostly a product of media acceptance. Angela Davis was recently offered yet another award from a "Civil Rights Museum," but it was withdrawn because of protests from a Jewish group. (Needless to say, Davis's attacks on whites are not even worthy of objection.)

However, the museum has now reversed course.

An Alabama civil rights museum reversed course after a public outcry and reinstated a human rights award to activist Angela Davis that it had previously rescinded, the organization announced Friday.

The Birmingham Civil Rights Institute said in a statement that its board has voted to reaffirm Davis, a Birmingham native, as the recipient of the award and has invited her to personally receive it. The statement said the board has not heard if Davis will accept...

Board members on Jan. 14 issued a public apology for the discord that resulted from its decision to rescind the award. They said there said there should have been more conversation with diverse points of view before making the decision.

In Friday’s statement, the board said its decision to give Davis the award is “in keeping with its commitment to learning from its mistakes.”

This is another example of how the Left can no longer be counted on to be pro-Israel. Yet more broadly, it's an example of how the Left never disowns its own radicals. Angela Davis [Email her] is almost a caricature of what right wingers would describe as an extremist. However, she prospers and will likely never face a real protest. In contrast, wearing a MAGA hat will put you in physical danger in most major cities.

It has nothing to do with "right" or "wrong" or what is "moderate" or "extreme." It's just a question of power.