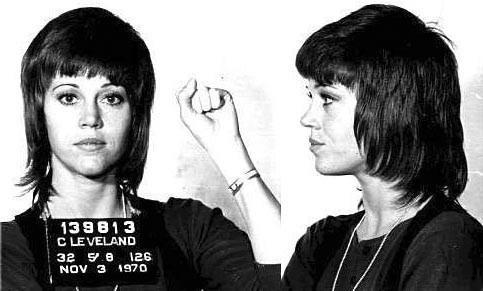 Jane Fonda just won't shut up. And her crocodile tears will not stop flowing. She has contracted an acute case of Aging Celebrity Hippie Syndrome—and it's going to land her tell-all memoir on the New York Times best-seller list in no time.

There she is on 60 Minutes, simpering about her failed relationship with her stoic father.

There she is in the Washington Post, detailing her past bouts with bulimia and lingering body image problems. (Which haven't damaged her enough to prevent her from posing for publicity photos: "Oh, God! Side lighting is not so good for me," the suffering Fonda orders the photographer.) [Ultimate Workout, By Lynne Duke, April 5, 2005 ]

There she is in the New York Times. And Time magazine. And on Good Morning America, blabbing about her bizarre trio of ex-husbands and their various pathologies. Adultery. Alcoholism. Prostitutes. Group sex. Blecchh. Aging hippies never learn. As college students, they had no appreciation of the value of self-restraint. Three decades later as senior citizens (Jane Fonda is a 67-year-old woman prattling on, Howard Stern-style, about threesomes, for heaven's sake), they still have no appreciation of the value of discretion.

At least when there's big bucks involved, that is.

And now, Hanoi Jane is everywhere, everywhere, issuing what many in the mainstream media have characterized as a so-called apology for her betrayal of American troops in Vietnam.

"As she has before, Ms. Fonda apologizes for being photographed laughing and clapping while sitting on an antiaircraft gun in Hanoi. (She writes that she absent-mindedly sat down in a moment of euphoria with her North Vietnamese hosts, and adds, 'That two-minute lapse of sanity will haunt me until the day I die.')" [And Now for Her Third Act: Jane Fonda Looks Over the First Two]

"I will go to my grave regretting that. The image of Jane Fonda, 'Barbarella,' Henry Fonda's daughter, just a woman sitting on an enemy aircraft gun was a betrayal. It was like I was thumbing my nose at the military and at the country that gave me privilege."

"Like" she was thumbing her nose? The woman delivered numerous broadcasts on Radio Hanoi claiming tortured POWs were in "good health," calling her own president a "new-type Hitler" on enemy airwaves, and accusing American pilots of being "war criminals."

Vietnam veterans see clearly through Fonda's ploy—yet another insult to the memory of fallen American troops.  Walter Inge wrote in a letter to the editor of the Atlanta Journal Constitution:

"Despite repeated claims, Hanoi Jane Fonda has never apologized for her treasonous collaboration with the Vietnamese Communists Writing that it was 'a betrayal' and 'a lapse of judgment' is a confession, not an apology."

"She committed treason. She exploited and misused American POWs. She gave the North Vietnamese communists, with whom we were then at war, propaganda that American POWs endured unimaginable torture not to give them, she gave it to them for free. And, indeed, she caused the deaths of American fighting men and the deaths of our allies as well."

Meanwhile, Fonda's fellow Hollywood hippie leftover, Peter Yarrow, traveled to Vietnam last week "ready to get down on my knees as one American and say, 'Please forgive us"—a sentiment with which the unrepentant Fonda—who has yet to apologize for those treasonous radio broadcasts—no doubt concurs.

No mind. Fonda's cynical non-apology "apology" keeps making headlines, just as she and her book publicists had hoped. This isn't about making amends. This is about making money.

Me! Me! Me! Hanoi Jane rides again.