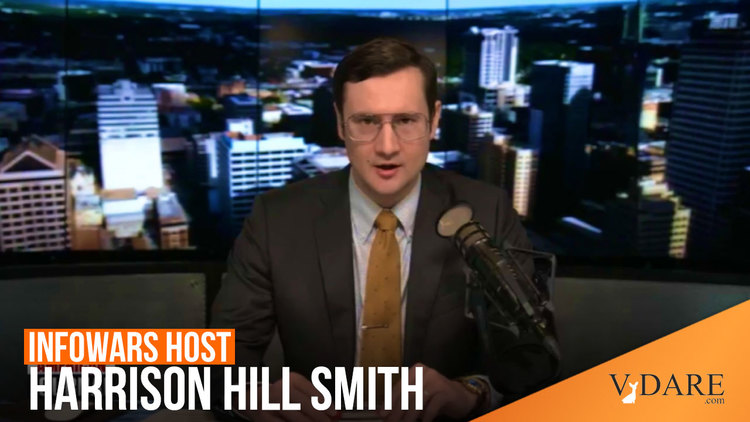 White Radio Host In Texas Denied COVID Treatment Because He's Not "Black Or Hispanic," But White

At this point, is it not obvious white people are second-class citizens in what was dubbed “Black-Run America (BRA)” by this author more than a decade ago?

Harrison Hill Smith, a Texas radio host, was denied monoclonal antibody treatment for COVID because he is white, not black or Hispanic.

Smith, who presents the American Journal on the InfoWars network, tweeted on Saturday that he was denied receiving monoclonal antibody treatment for COVID because he was white, adding that such treatment was only available “for blacks and Hispanics,” which he described as being “fucking insane.”

Despite some initial skepticism from some leftists, Smith produced a video clearly showing medical staff declaring that the only reason for his rejection was his ethnicity.

Dave Reilly, an America First commentator and former Republican candidate, was able to corroborate Smith’s story via a phone call with the Texas State Infusion Hotline. “There’s eligibility criterias that we go by, and African American and Hispanic are high risk ethnicity groups, so that would be a qualifier,” the hotline staff member told Reilly, saying that “people with a BMI of 25 or higher, people who are 65 years of age or up, or high risk ethnicity groups can get it.”

“So if you are a healthy, in-shape, Caucasian, and you show up, you are not gonna get an infusion?” Reilly asked the phone representative. “Based on the criteria that we go by right now, that is correct,” they confirmed.

It is unclear exactly where the guidance of certain ethnic groups counting as being “high risk” and therefore eligible to receive monoclonal treatment for COVID has come from. In official Texas HHS and other government and state documents, including the FDA’s Emergency Use Authorization for the treatment, that discuss high risk groups, ethnicities are not mentioned.

However, such guidelines can be found on private hospital websites, but are also clearly known by state employees, as demonstrated by Reilly’s call to the Infusion Hotline. The infusion centers where the treatment is taking place are also funded by the Texas state government, meaning that the policy is at the very least approved by proxy by the Abbott administration.

Speaking exclusively to National File, Smith described what happened as being “the inevitable result of the critical race theory/equity theology worming its way into healthcare,” and said that the implications of his refusal are “obvious and horrifying. Race and gender extremism isn’t just in gender study classes or elementary schools, it’s being taught in Medical schools and is having real-world effects.” Smith also revealed he was not giving any COVID treatment at all following his rejection for monoclonal treatment.

Many other conservatives and supporters of the America First agenda were astonished by Smith’s video. Darren Beattie, the former Trump White House official and founder of Revolver News, said Smith’s rejection for treatment was simply “outrageous,” comparing the incident to the policies of the CCP, who also “denies medical treatment to Uyghurs on account of their ethnicity.” Representative Thomas Massie slammed the “divisive policy,” adding that “denying people life-saving medical treatment based on ethnicity is not ok.”

We live in a society increasingly explicit in being anti-white, where advancement in the managerial elite requires a slavish devotion to who can be the most dedicated to this objective.

Buckle up, there’s no getting off this ride.