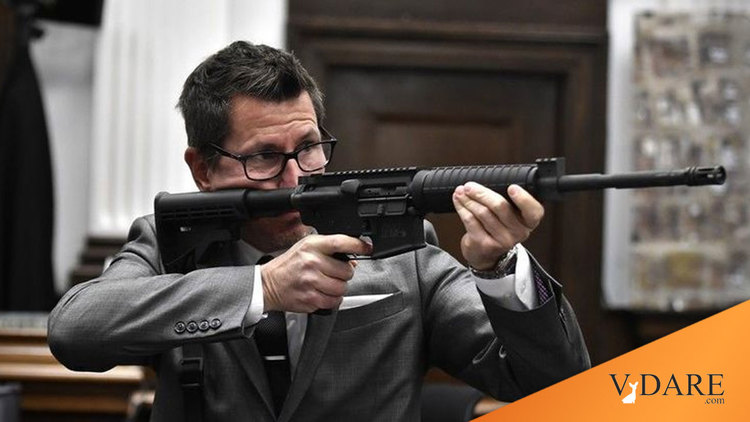 Rittenhouse Prosecutor Illegally Points Gun (Which MAY Be Unloaded) At Jury, Others In Courtroom

RITTENHOUSE PROSECUTOR SHOCKS EVERYONE WITH WHAT HE DOES WITH AR-15 IN COURT: “But you may not believe what Binger did next in the course of trying to make his point about Rittenhouse’s actions. He picked up the AR-15 that was an exhibit in the courtroom and pointed it at people including the jury. Check the finger placement, too:” As Steve writes at the PJ Mothership: WHOA: Rittenhouse Prosecutor Thomas Binger Aims AR-15 at People in Courtroom, Finger on the Trigger.

UPDATE (FROM GLENN): Alec Baldwin was unavailable for comment.

I think, when I zoom in on the rifle action, that the bolt is open and locked back, i.e., visibly, to the man who's holding it, unloaded, I could be wrong—the number of people who've been shot by weapons thought to be unloaded when the clip was removed is very, very, very large.

(For people who don't know guns, there is frequently one round still inside the gun after the clip is removed.)

But even if it is actually unloaded, as known to him, that's no excuse. According to RedState, Binger claimed that "his assistant checked it for him," which means that he was taking the guy's word for it. (Colonel Jeff Cooper said that a judge has held that a man may "reasonably" take another man's word for whether a gun was loaded, which was obviously wrong, since the question wouldn't have arisen unless someone was shot—as happend to Alex Baldwin's victim.)

Rust armorer was ‘new to job’ and worried she ‘wasn’t ready’ on first job before Halyna Hutchins deathhttps://t.co/49EgWFe2jR

It's illegal to point guns, including unloaded guns,  at human beings in, as far as I know, every state of the Union, but definitely in Wisconsin, where this trial is being held.

941.20  Endangering safety by use of dangerous weapon.
(1)  Whoever does any of the following is guilty of a Class A misdemeanor:
(a) Endangers another's safety by the negligent operation or handling of a dangerous weapon.
(b) Operates or goes armed with a firearm while he or she is under the influence of an intoxicant.
941.20(1)(bm) (bm) Operates or goes armed with a firearm while he or she has a detectable amount of a restricted controlled substance in his or her blood. A defendant has a defense to any action under this paragraph that is based on the defendant allegedly having a detectable amount of methamphetamine, gamma-hydroxybutyric acid, or delta-9-tetrahydrocannabinol in his or her blood, if he or she proves by a preponderance of the evidence that at the time of the incident or occurrence he or she had a valid prescription for methamphetamine or one of its metabolic precursors, gamma-hydroxybutyric acid, or delta-9-tetrahydrocannabinol.
(c) Except as provided in sub. (1m), intentionally points a firearm at or toward another.

Emphases added. "Except as provided in sub. (1m)" means that if, like Kyle Rittenhouse, you're attacked by three men, armed with blunt instruments and a gun, you're allowed to point a gun at them, but nothing can excuse this kind of (a) negligence, and (b) intimidation.

The prosecutor should be charged with this—it's not a felony, but is a Class A misdemeanor in Wisconsin, worth "up to 9 months in jail, a fine of up to $10,000, or both jail and a fine."

And if a jury did convict Rittenhouse of anything, I expect that an appellate court would find this cause for throwing out the conviction.