The Big Lie about Sanctuary Cities is that those cities, counties, and States just want not to be forced to act as immigration enforcement. They claim that immigration is a Federal responsibility and they should not be forced to arrest and hold illegal aliens. Fair enough, they don't, in theory, have to cooperate with the Federal government.

Of course, those same cities, counties, and States cooperate with the Federal government in other areas, enforcing Federal environmental, affirmative action, housing, welfare, criminal, medical, public health, and other laws with no complaints. Strictly speaking, the Federal government cannot dragoon the States into taking action, but it occurs routinely, with varying levels of compliance.

For instance, Federal and State food inspection services, the Food and Drug Administration (FDA) and Food Safety and Inspection Service (FSIS) work closely with State agencies charged with food safety both routinely and closely. They do joint investigations, they target the same suspects, and conduct joint inspections and raids on food producers. They do this more or less voluntarily. The Federal government also requires that States who accept various welfare program monies work with Federal agencies, and provide records, to the FBI and the Department of Health and Human Services and Department of Agriculture Offices of Inspector General upon request and are required to have welfare fraud statutes and enforce those statutes.

However, the claim from Sanctuary Cities that they cannot be required to help with immigration law enforcement is just not true. Sanctuary Cities accept Federal money from various programs, from education, to welfare, to law enforcement that are impacted by illegal aliens. The same authority to require States and their political subdivisions to conduct welfare fraud investigations and prosecutions or to provide education to all children in their jurisdiction is no more an unconstitutional mandate than requiring a Sanctuary City, County, or State to accept an immigration detainer and hold an alien for 48 hours. In fact, such political jurisdictions spend more money on educating illegal aliens than they do holding criminal suspects 48 hours on an immigration detainer.

While I understand the Constitutional arguments against any imposition on a State; Sanctuary Cities, Counties, and States have no complaint about Federal impositions if they accept some, but reject other regulation, restrictions, and obligations. That just won't fly.

However, the overriding claim by Sanctuary Cities that they just don't want to be active in immigration law enforcement is a lie. Their real intent and actual behavior, is to protect illegal aliens from lawful arrest by Federal authorities. Sanctuary Cities don't just want to ignore the issue and not participate, they  want to actively interfere with Federal law enforcement, and every day brings new information about such illegal activity by Sanctuary Cities. Prime suspects in this criminal activity of interfering with Federal agents are New York Attorney General Eric Scheiderman and Brooklyn District Attorney Eric Gonzalez, all a violation of Title 18 United States Code Section 111, Obstructing A Federal Agent. 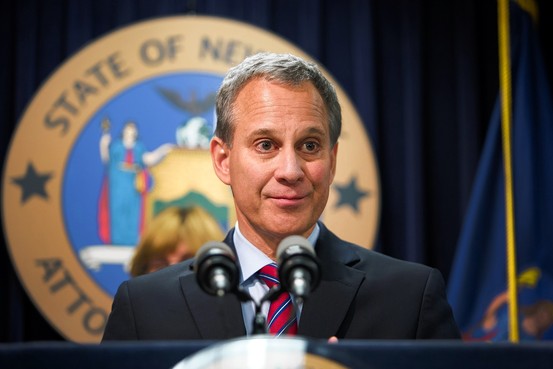 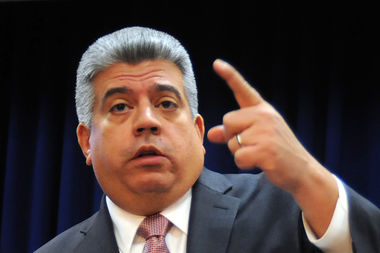 State and local authorities Thursday accused ICE agents of scouring local court halls in undercover clothes hunting immigrants to toss out of the country and demanded that they stop.

“I am going to call on ICE to treat our courts like sensitive locations, like it does school and houses of worship,” acting Brooklyn DA Eric Gonzalez said at a joint press conference with Attorney General Eric Scheiderman. “I’m going to ask that ICE refrain from arresting witnesses and victims...”

The pair said US Immigration and Customs Enforcement agents have even been lurking in Family Court and courts that help human-trafficking victims.

“ICE almost always comes into court in groups of two to four agents, and they are in plain clothes,”said Lee Wang, a staff lawyer at the Immigrant Defense Project which claims ICE has attempted to arrest 60 people so far this year in state courts, eight of which were in Brooklyn.

“They are in jeans and a sweatshirt, they are in khakis and polos, sometimes they have a visible badge, and sometimes they don’t,” he said. “I think what is very disturbing is that they will often not identify themselves even to defense attorneys. They won’t even say who they are or show any kind of warrant. They are really acting as rogue operators in the courts.”

That is not just avoiding cooperating with immigration enforcement. Something that the State of New York does not avoid when it comes to providing welfare to New Yorkers or inspecting food production facilities. In both of those areas both the Borough of Brooklyn and the State of New York cooperate closely with the Federal government. However, neither are being neutral when they decide to act to protect illegal aliens from arrest in courthouses. And it appears that soon New York and Brooklyn will be taking the same action to protect illegal aliens that the State of California Labor Commission is now doing.

Labor Commissioner Julie Su last month directed her staff to turn away Immigration and Customs Enforcement agents unless the federal officers have warrants.

Her directive followed three instances over the past 10 months in which immigration agents sought information about California workers who had filed claims against employers. In two cases, immigration agents attempted to attend hearings where investigators discuss claims with workers and their employers, Su said. In all three cases, the agents left when they were asked, she said.

It is shocking that ICE allowed this to happen. Instead, what should have happened would have been for  ICE agents to forctheir way in and arrest the illegal aliens, as well as the employees who interfered. Labor Commission employees are not armed and could not have successfully resisted. Su and the State of California need to be taught a lesson, a hard lesson if necessary. ICE has Robocops and armored vehicles, use them. And I would love to see Julie Su in jail.

This is what will be coming soon to California, New York, and other courts. Open obstruction of justice in order to aid illegal aliens to remain in the United States. To date, both the Department of Homeland Security (DHS) and the Department of Justice (DOJ) have not taken the cases of where local officials interfere with immigration enforcement in order to protect illegal aliens from arrest. U.S. Immigration and Customs Enforcement (ICE) Director Thomas Homan says they will be going to arrest such officials, but nothing has happened yet. Neither he nor Attorney General Jeff Sessions has arrested or charged Monica Herranz, the Mexican judge in Oregon who helped an illegal alien to escape arrest.

The arrogance of local officials has no bounds. Even a small-town mayor is demanding, yes, demanding, from ICE answers about arrests of illegal aliens in the run down city of Hayward, CA. This is not merely not involving oneself in immigration enforcement, but demanding a veto power over Federal actions. City officials said they were blindsided by the recent arrests of two undocumented immigrants by U.S. Immigration and Customs Enforcement and have raised questions about how two family men headed to work ended up in detention and on a path toward deportation.

The city in a statement called on ICE for answers about the arrests of Antonio Valenzuela and Jose Salgado on July 27 after first reading about the incident in this newspaper. Officials said they also plan to issue a letter to the agency this week requesting timelier information for future ICE operations.

“In a community like ours — which is one of the most diverse and which is very welcoming of people from all over the world — people are very concerned about this happening and they want information,” Mayor Barbara Halliday said.

The mayor even went so far as to demand to monitor immigration proceedings, but of course she does not monitor criminal proceedings of Hayward residents when arrested by the police or sheriff.

“The fundamental issue here is that the city of Hayward has a substantial interest in knowing that all of its residents are receiving due process under the law,” he said. “Based on what we read about the case and the very limited information we’ve been able to obtain, we’re really not able to ascertain that one way or another.”

Attorney General Sessions is allowing criminal activity by Sanctuary Cities to fester and grow. Soon there will be a crisis when ICE agents are killed by local police or illegal aliens encouraged to fight arrest by Sanctuary Cities. While I for one will welcome treating Los Angeles, Hayward, and San Francisco as Sherman treated Atlanta and Charleston, the task will be bloody. Better to avoid such extreme measures by taking action now with arrests and prosecutions. Enoch Powell warned in his Rivers of Blood speech it was the responsibility of statesmen to avoid disaster, in this case a short, but bloody Civil War II in California. A statesman would avoid war by targeted arrests and prosecutions of California and other politicians.