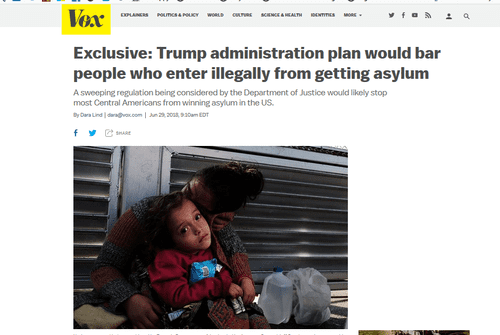 Word is out that illegal aliens from the Caravan of Death To America By Demographic Displacement are suddenly failing the initial Credible Fear screening interviews. Is is a game changer and has implications for solving the current crisis at the border. Under Clinton, Bush, and Obama administrations aliens were not held the actual legal standard in immigration law, which is that an alien must provide evidence of a well-founded fear of persecution in their country of citizenship based on race, religion, nationality, membership in a particular social group, or political opinion. This is the definition in immigration law. In the Illegal Immigration Reform and Immigrant Responsibility Act of 1996, a process was created to examine claimants for such status called the Credible Fear process. In this case well-founded and credible are interchangeable.

In the current crisis, the flood of Central Americans fleeing poverty and crime in the failed states of Guatemala, Honduras, and El Salvador, as well as a mix of others from Africa, Asia, and the Middle East, including those from states that are not complete hellholes such as Brazil, those arriving must go through two Credible Fear screenings. The first is an interview by either a Border Patrol Agent (BPA) if the alien is arriving illegally, or a Customs and Border Protection Officer (CBPO) if arriving at a Port-of-Entry at the border with Mexico.

This is the first screening where the BPA or CBPO has to make a decision as to whether the claim of fear is credible or just a lie told to gain entry to the United States. The second screening is by an Asylum or Refugee Officer, who again makes a determination as to the alien’s credibility, whoever, the difference is that in both the alien is referred afterwards to the Executive Office for Immigration Review (EOIR) for a removal hearing.

Now, at one point upwards of 100 percent of aliens were passing the first screening and 88% passing the second screening. Those figures were, of course, much too high. Most asylum applications are fraudulent, with even those referred to the EOIR, only 18% were approved, which is still too high, as Jan Ting has pointed out.

The good news though is that the Trump Administration has been trying to implement the advice from your humble correspondent, implement the law and screen asylum claimants for credibility and use Expedited Removal to immediately remove failed asylum seekers. [Fate Of Honduran Caravanners STILL Unclear, But Trump MUST Crack Down With Executive Options, by Federale, VDare, May 17, 2018]

The Department of Homeland Security has prepared new guidance for immigration agents aimed at speeding up deportations by denying asylum claims earlier in the process.

The new guidelines, contained in a draft memo dated February 17 but not yet sent to field offices, directs agents to only pass applicants who have a good chance of ultimately getting asylum, but does not give specific criteria for establishing credible fear of persecution if sent home.

The guidance instructs asylum officers to “elicit all relevant information” in determining whether an applicant has “credible fear” of persecution if returned home, the first obstacle faced by migrants on the U.S.-Mexico border requesting asylum.

Three sources familiar with the drafting of the guidance said the goal of the new instructions is to raise the bar on initial screening.

That is good news, and in even better news, there seems to be some effort to implement full legal standards for asylum claims. Aliens are now failing credible fear interviews, apparently by Asylum and Refugee Officers, rather than by BPAs and CBPOs (unfortunately) as most should be screened out by initial interviews at arrest or entry.

Jodi Goodwin has spent the past month helping grief-stricken parents with their asylum cases.

On most days, the Harlingen, Texas-based immigration lawyer drives to the Port Isabel Detention Center just outside of Brownsville to meet with clients who were separated from their children. But, she says, those mothers and fathers are too devastated to prepare for their court hearings.

Instead, they replay the moment their kids were taken away by Border Patrol, worry about their children’s well-being, and ask repeatedly where their sons and daughters are. In some cases, they simply weep.

“They are losing it,” Goodwin said. “They are red-faced and have bloodshot eyes and all they do is cry. We are trying to ask them basic information but they are whimpering and they can’t talk.

“We are having to hug them and hold them tight to try and give them some kind of comfort,” she continued, starting to cry over the phone. “It’s ridiculous…”

Now, ignore the virtue signalling and womanly histrionics about crying all day about being separated. That is just not true. In any event, all these women were prepared ahead of time by Treason Bar shysters about what would happen. They knew they would be separated and the hysterics is just for show. They knew what would happen.

But the good news is that apparently Asylum Officers are being tougher on the fraudulent claims, though not by enough.

Goodwin says that over half of the roughly 20 parents she spoke with on Thursday did not pass their “credible fear” interviews ? a process that determines a person’s asylum eligibility. She thinks they are too distressed about their children to effectively tell an asylum officer why they fled their country and could be killed upon return.

“It’s even hard for us [lawyers] to get them to talk about their reasons for coming,” Goodwin said. “They are beside themselves because they are not with their kids.”

Under the new instructions by Attorney General Jefferson Beauregard Sessions III, fear of crime, whether gang related or domestic violence, are not a basis for asylum, despite apparent sabotage by the Asylum Corps at USCIS.

Time for Lady DACA to get off her duff and bring the USCIS Asylum Office fully under control and fully implement the Federale Plan; put an end to the Caravan of Death To America By Demographic Displacement by fully implementing Credible Fear screening and Expedited Removal!