Obstructing Justice, Destroying Records—Time To Move Against The "Sanctuary State" Of California

The State of California is moving to protect illegal aliens from arrest and deportation. In a recent move connected with pledges by Governor Jerry Brown to interfere with Federal law enforcement efforts, the California Department of Motor Vehicles, which unlawfully issues driver's licenses to illegal aliens, moved to delete identifiers in the DMV computer system for illegal aliens. This is a move to destroy evidence and interfere with compliance with any upcoming subpoena issued by a component of the Department of Homeland Security or search warrant issued by Federal magistrate or District Court judge.

(Conservative Tree House) A senior level IT source within the California Department of Motor Vehicles has informed CTH within the past 48 hours California officials have instructed DMV data programmers to remove the internal coding flags for the drivers licenses of illegal aliens in California.

As you might be aware, California passed a law known as AB60 authorizing illegal aliens to receive drivers licenses throughout the state. Within the administrative functions of the state DMV database a designation code known as “AB60 code” was created to flag those specific licenses as containing “Federal Limits Apply”. 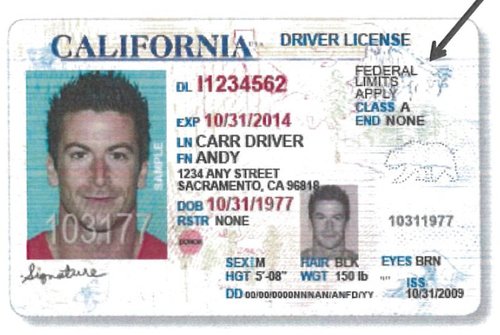 We have confirmation from a top level IT source state officials have instructed programmers to immediately remove AB60 administrative coding. The removed code in question is an administrative function for identifying the registered DL holder as an “undocumented person” or illegal alien holder within the DMV database.

Note that the original article on the Conservative Tree House is unavailable for some reason—we've recovered an Archive.is version here.

This action by Governor Brown, his subordinates, Brian P. Kelly, Secretary of the California State Transportation Agency (CalSTA) and Jean Shiomoto, Director of the Department of Motor Vehicles (DMV), is illegal. It is an attempt to obstruct a Federal investigation and destroy evidence in a criminal investigation. These are violations of Title 18 United States Code (USC) Section 1506, Alteration of A Record, 18 USC 1510, Obstruction of a Criminal Investigation, 18 USC 1505, Obstruction Of A Proceeding Before A Department, and 18 USC 1519, Destruction Or Alteration of Evidence In A Federal Investigation.

It is now clear why Chuck Schumer is holding up the confirmation of Jeff Sessions . Schumer is terrified that the Department of Justice will become the hammer that takes down the powerhouse that lies behind the Democrat Party, the money and votes in California.

Mark Zuckerberg recently attacked President Donald John Trump in a speech about Facebook's corporate future. The threat there being the cheap labor that will soon be going away. Zuckerberg's billions will have to soon go to paying American computer programmers a higher wage.

Facebook CEO Mark Zuckerberg on Friday blasted President Donald Trump’s executive orders relating to immigration. “Like many of you, I’m concerned about the impact of the recent executive orders signed by President Trump,” Zuckerberg wrote on Facebook. “We need to keep this country safe, but we should do that by focusing on people who actually pose a threat.”

The real fear is that there is a draft executive order in the works that will greatly restrict illegal use of expired F-1 Student Visa holders and fraudulently obtained H-1B work visa holders by Facebook and other tech companies.

Trump should demand that the Senate vote on Sessions immediately, for the new Attorney-General has much work to do, especially appointing a new United States Attorney for the Eastern District of California, where the DMV computers and programmers are located.