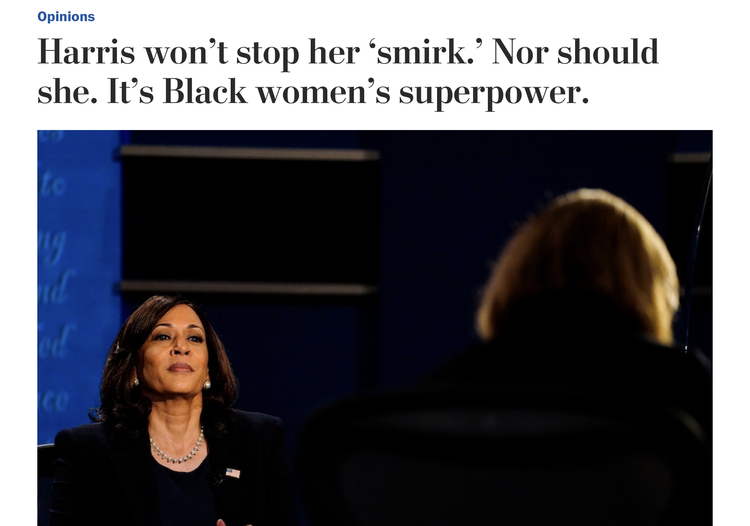 Harris won’t stop her ‘smirk.’ Nor should she. It’s Black women’s superpower.

People who are telling Democratic vice-presidential nominee Kamala D. Harris to stop smiling or “smirking” or making allegedly exaggerated facial expressions should save their breath. The California senator is not going to stop — nor should she.

Why would she relinquish one of her innate superpowers?

In other words, the headline was inadvertently racist in implying that black women have one superpower. In reality, Black Women have multiple innate superpowers.

… Black women have elevated the “Mama don’t take no mess” expression to a form of high art — a narrowing of the eye, a lift of the eyebrow, a tilt of the head. Sometimes there is a sideways arch of the neck, a molasses-slow movement of the jaw that says, without speaking, “You’ve got exactly 10 seconds to pick up your feet and run for the hills.”

Some of this is the stuff of caricature. The kind of thing that leads Black women to be called sassy, volatile, aggressive or angry. All of that is an effort to dismiss or demean. But that attempted erasure is the very reason Black women — indeed, most women — have some version of The Look in their arsenal.

Women often can’t get a word in edgewise in the workplace — or, really, any place where they share a room with men. This phenomenon is universal and documented in a large body of research.

… This unfortunate reality knows no boundaries. There is actually a whole lexicon for it:

Mansplaining: When a man feels the need to explain something to a woman, often despite her obvious expertise or experience. (Case in point: Pence explains systemic racism to Harris.)

Bropropiation: When a woman introduces a concept or idea that a man subsequently takes credit for.

Manterruption: Describing how men interrupt women repeatedly and unnecessarily. A study by Brigham Young and Princeton universities found that men dominate 75 percent of the conversation in board meetings. When men control the discourse, they control the decision-making — unless women figure out how to break through.

But, of course, a smirk is the Worst Thing Ever when the wrong sort of people do it.

From the New York Times news pages a “news analysis:”

Kamala Harris and the ‘Double Bind’ of Racism and Sexism

As the Law of Intersectionality states:

Reactions to her debate performance show not only the bias that women and people of color face, but the fact that for women of color, that bias is more than the sum of its parts.

Obviously, because Kamala Harris is so oppressed by the fact that she is a woman, black, a Brahmin, and the child of immigrants, she therefore deserves to be Vice President and, in the fullness of time, President more than practically anybody else does. The only reason her 2019 campaign was such an ignominious disaster, not even getting her to the Iowa Caucus, was due to her oppression.

The selection of Senator Kamala Harris as a running mate for Joseph R. Biden Jr. thrilled many Americans

, but also unleashed a steady drip of racism and sexism.

… Her selection as Mr. Biden’s running mate thrilled many Americans who saw themselves represented in a major presidential campaign for the first time. It also unleashed a steady drip of racism and sexism, underscoring not only the double standards women and people of color face, but what happens when multiple identities meet: a Black woman, an Indian-American woman, a woman whose parents were immigrants.

One of the oldest racist tropes is that of the “angry Black woman.” …

These caricatures and double standards have been accompanied by sexualization, common against women of all races but especially those who are Black. This is another racist trope, the promiscuous, hypersexual “Jezebel.”

After Mr. Biden chose Ms. Harris, the right-wing radio host Rush Limbaugh suggested falsely, quoting from a conservative website, that she had “slept her way up.”

… The lawyer and civil rights activist Kimberlé Crenshaw introduced the term “intersectionality” three decades ago to describe how various identities can overlap to produce discrimination more complex than just, for instance, racism plus sexism. Experts said Ms. Harris’s experience was a prime example.

Clearly, the Vice Presidential nominee has been the victim of extraordinarily complex discrimination over the course of her career. If not for all the disadvantages she has suffered due to her races and sex, her talents would have taken her far further than where she is now.